The growth on Ethereum’s DeFi is evident in more than just its Total Value Locked (TVL). While this figure has reached an important milestone and has surpassed $10 billion, so has the Ethereum-centric wallet, MetaMask, by registering 1 million active users per month. The tool is one of the most popular ways, as evidenced by its growth, to interact with protocols on the DeFi sector, blockchain games, and other dApps.

According to a publication by Talia Knowles, Head of Marketing for the company that developed MetaMask, ConsenSys, the number of active monthly users has seen a 400% increase from the 264,000 reported in 2019. Comparing the growth of MetaMask users with the early days of the Internet, Knowles said:

MetaMask user growth happens in a compounding feedback loop similar to the feedback loop of the internet itself. Users onboard to use one site, and end up discovering hundreds of other sites from decentralized finance to gaming to new communities.

ConsenSys’ Head of Marketing mentioned the launch of the mobile version of MetaMask as a growth factor. Knowles further described the MetaMask community as diverse and stated that the countries with the highest amount of user for MetaMask mobile are the United States, India, Nigeria, and the Philippines.

Another important reason for the growth of the application is the increased use of DeFi protocols, as mentioned. The chart below shows that the number of active users had its highest growth from May and June which coincides with the increase in Total Value Locked of DeFi protocols from around $900 million to $4 billion at the end of July. And as Knowles said, the number of active users is expected to grow even further:

It’s not just the ability to buy and store Eth that’s powering our new phase of growth. When you think about it, people don’t really want a wallet. They want to invest, sell, lend, borrow. They want to use sites like Uniswap, Yearn, Curve, Maker and Aave to get that job done. MetaMask is simply the connective tissue. 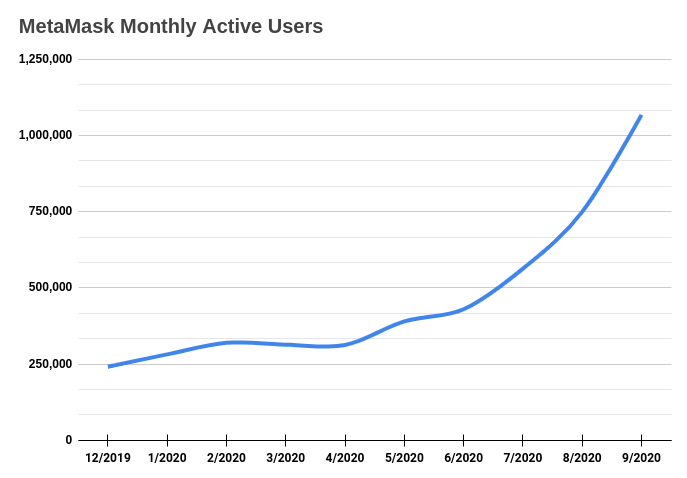 With a dominance of 21.75% and a TVL of $2.28 billion, DeFi Pulse data shows that Uniswap is the fastest growing DeFi protocol that has driven MetaMask’s increase in monthly users. Uniswap’s TVL has grown by nearly 1,700% in recent months, following the launch of a second iteration (Uniswap V2) and its transition to a decentralized governance model with the issuance of its UNI token.

Data from Dune Analytics shows that there are 47,519,807 million delegated UNI in 2,111 delegating addresses. In total, Dune records 87,026 UNI holders and a considerable increase in the number of UNI delegated in the last week, as shown below. 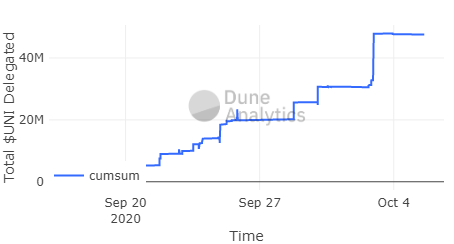 However, despite the positive indicators for the stock market, UNI has recorded substantial losses. At the time of publication UNI is trading at $3.04 with a loss of 17.41% in the last 24 hours and a correction of 30.90% in the last week. According to the trader “MacnBTC”, the token lost its support level ($ 3.5), so he expects a prolongation of the decline in UNI price.

Sadly this still looks like massive distribution. Lose $3.5 and it's going a lot lower pic.twitter.com/DdUHVs4wnU

The drop in the governance token is attributed to the loss of FOMO from investors who wanted to take advantage of the token’s boom at its initial launch. In addition, a Glassnode report highlighted the possible centralization of Uniswap’s governance model. The report stated that a portion of the governance funds is liquid and available for use at the discretion of Uniswap’s founders.