The second largest cryptocurrency by market cap Ethereum is accelerating into uncharted territory. At the time of writing, the ETH price has climbed above $1,900 and according to several analysts, there is a good chance that the bulls will prevail.

Economist Alex Kruger stated via Twitter that Ethereum “will soon pass the next level,” by which he meant that the cryptocurrency will soon reach $2,000. Kruger relies on Fibonacci expansions, the performance on the derivatives market, and “round numbers” to assert that ETH has established strong support in the $1,500 to $1,600 range and could rise to $2,750. Kruger stated:

If you look at ETH options’ open interest by strike you will notice most strikes above all time highs are set at key fib levels. 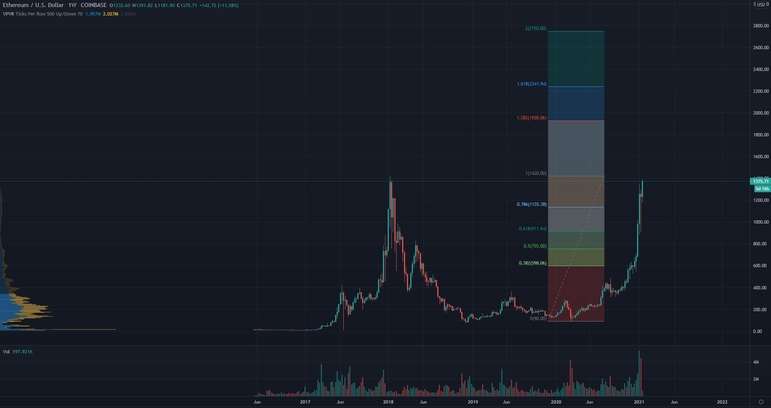 Why Ethereum has rallied and how it is different from 2018

CryptoQuant CEO Ki-Young Ju shared data indicating that selling pressure and transaction outflows for ETH on exchanges are lower than in 2018. As the chart below shows, ETH transaction inflows and outflows are currently significantly lower than in January 2018 and July 2019, when the cryptocurrency peaked and suffered a subsequent crash. With a current reversed trend, the price of ETH seems poised to continue its upward trend.

Ethereum’s fundamentals are just as bullish. IntoTheBlock data shows a 38.9x increase in the DeFi sector compared to 2020 when the Total Value Locked (TVL) stood at $1.07 billion. Now, that figure has grown to an all-time high of $41.63 billion.

Additionally, the rise in the DeFi sector’s TVL coincides with increased usage of the Ethereum network. In the last week, Ethereum’s blockchain has processed an average of 1.2 million transactions per day with 550,000 active addresses daily, as shown in the chart below.

Institutions have begun to adopt ETH based on a rise in the indicator for transactions over $100,000 registered on Ethereum. This volume has risen by 45 times in the last year. By comparison: Ethereum settles $12 billion in daily transactions and Bitcoin $9 billion, as indicated by the researcher for Messari Crypto Ryan Watkins.

Imagine not being bullish $ETH. pic.twitter.com/3NfOz1ruiM

IntoTheBlock listed all the bullish arguments for Ethereum in one tweet:

Why?
+ change in net network growth vs previous week
+ 7-day MA of addresses profitability
Whales and investors are adding to their ETH positions
+ shift in number of $100k txs
+ futures market momentum