The phenomenal growth of Ethereum‘s DeFi sector continues. The total value of all assets allocated to a DeFi application currently exceeds $3.84 billion. However, the currently undisputed star in the ecosystem is the token of the yearn.finance protocol, YFI, which is currently attracting the attention of investors and the whole crypto community.

The YFI token was launched as a governance token by the developers of the yearn.finance protocol, whereby they warned investors that it would initially be worth $0. However, within 24 hours of its launch, YFI posted a 2,000% increase in value. The token has risen from a value of $0 to the current price at the time of release of $3,907, with a gain of 95% in the last 24 hours alone. Overall, YFI has posted a gain of over 11,000% over the last week (since last Saturday).

According to Coingecko’s data, YFI has a supply of 26,000 tokens and it’s trading volume over the last 24 stood at $53,829,964. The token has caused a frenzy among investors because of the incentive program which promises its holders an annual interest of 1,000%. Regarding this, Ethereum core developer Eric Conner commented that trading in the DeFi sector is turning centralized exchanges into “irrelevant” entities:

Centralized exchanges are slowly becoming irrelevant. YFI is the hottest thing in DeFi and is only being traded on Balancer and Uniswap. It has nearly the same 24 hour trading volume as COMP and MKR.

By comparison, Ethereum (ETH) is priced at $284, at the time of publication with a 5% gain in the last 24 hours. Despite being one of the cryptocurrencies with the highest increases in value within the last month, ETH is only recording a 21% gain. In line with that, the number one cryptocurrency by market capitalization, Bitcoin, has had almost two months of modest gains. BTC’s current price is at $9,609 with an increase in value of 1% within the last 24 hours.

This is an example of how the tokens of the Ethereum DeFi sector outshine the major cryptocurrencies. According to a survey on Twitter, some users believe that YFI will reach $10,000 before Bitcoin (BTC). The poll was conducted by Andrew Kang with 1153 users participating. Kang commented on the result as follows:

Another sign of the rapid expansion of the DeFi sector is the price performance of the Aave loan protocol. Its LEND token has been outperforming other popular tokens, such as the MKR token of the Maker DAO platform and Compound’s COMP.

In that sense, the Total Value Locked on the platform has reached a new all-time high of $600 million with an increase of 90% over the last 30 days. Although it has fallen in the last 24 hours, the TVL of Aave still stands at $544 million, as can be seen in the graph below. 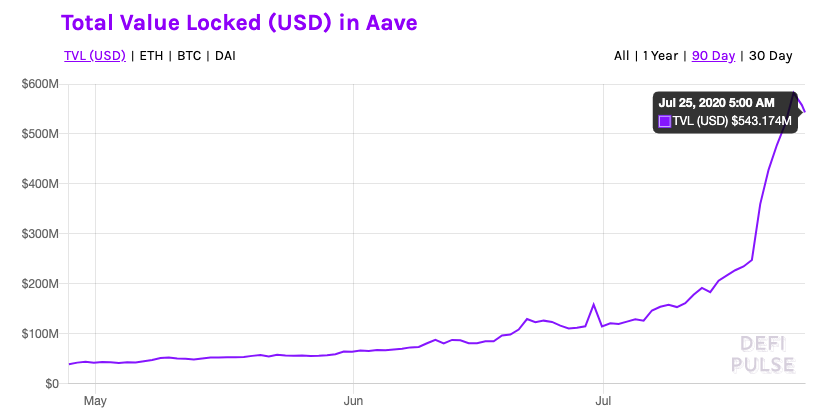