Years of work have materialized with the successful deployment of phase 0 of Ethereum 2.0. Known as Serenity, the Beacon Chain marks the beginning of the migration of Ethereum to a blockchain-based on Proof-of-Stake (PoS). The community and a sector of the crypto space celebrate the event. The Ethereum Core developer, Péter Szilágyi said:

I’m super happy the project reached this phase and both congrats and good luck on all people involved! Here’s to a smooth next few hours, days, weeks and months!

The Genesis block of Ethereum 2.0 has been validated with 80% participation in the network and more than 27,000 validators.

Eth2 is live with 80%+ participation, signaling the chain is healthy #serenitynow

(And over 3k+ people watching the livestream)

Ethereum co-founder Joseph Lubin stated that the Beacon Chain is an example of how the network has been able to attract investors from around the world to participate in its consensus model.

In that sense, Lubin believes that PoS is an improvement for the “incentives in the crypto economy” that make Ethereum “a pillar” as a trustless network that operates without the need for a third party. According to Ethereum’s co-founder, the achievement is a reflection of the community’s willingness to build a fully decentralized network. Lubin added:

The global economy needs an objectively trustworthy frame of reference to coordinate logic and transactions between business networks. Ethereum is the leading candidate, already functioning as the global settlement layer for ~$1 trillion in digital assets on the decentralized web.

One of the promises of Ethereum 2.0 is to improve the scalability of the network. Lubin acknowledges that this will not happen overnight, but believes that the community “is proving that with the right incentives”, Ethereum can become a more secure and decentralized platform.

During the next few years, developers will focus on building new capabilities to make Ethereum more scalable. The introduction of shardings will be an important achievement to reach that goal. Ethereum’s inventor, Vitalik Buterin, has been an active member of the celebration. On his Twitter account, he shared the following message:

Normal people: we should really put something profound in the first block of the ethereum PoS chain, something about giant leaps for mankind or whatever.

As the image in the Tweet shows, the message posted in the Genesis block (Mr. F. was here) is a reference to an autograph that Buterin gave to the members of the Queen band. The developer of Ethereum, Hudson Jameson made this clear to community members who were unaware of the relationship between Buterin and the rock band.

For the record: Mr. F is a reference to Queen and Vitalik's autograph to them. pic.twitter.com/06yR3wcL35

In the midst of the celebrations, other crypto community members have begun to discuss the possible implications of this new phase for Ethereum. Among the main concerns of the users is the possible increase in centralization of the network, the future of the DeFi ecosystem due to possible changes in Ethereum 1.0’s protocol, and a possible change in regulations towards Ethereum 2.0.

Regulators such as the U.S. CFTC have declared Ethereum and Bitcoin commodities based on their consensus protocol. The migration to PoS could change this and make trading with ETH2 a taxable activity, a Twitter user commented.

Selling ETH1 in exchange for ETH2 is a taxable capital gains event.

US Treasury is going to love this "upgrade"!

Meanwhile, ETH’s price stands at $573 with gains of 7.62% showing a good reaction to the deployment of Phase 0. In the last 30 days, ETH shows gains of 61.91%. As recorded by the Glassnode firm, the number of Ethereum addresses that are in profit has registered a 2-year high of 88,263, as shown in the graph below. 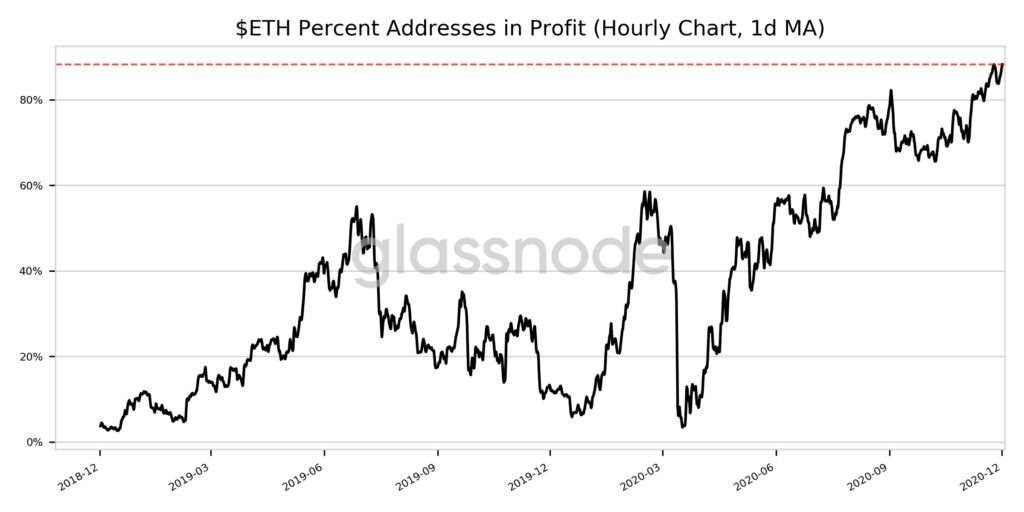