In the last week, the Ethereum community has been on the alert for the possible launch or delay of phase 0 of Eth2. The deposit contract to activate that phase requires that more than 500,000 ETH or $270 million be locked in by the validators. The required amount must be reached by November 24.

According to the monitor of the deposit contract DepositEth, at the time of publication, 235,168 ETH have been delegated. As indicated by Dune Analytics data, the amount of ETH staked as of November 15th has increased significantly. Leaving only 289,120 ETH required for Beacon Chain deployment. 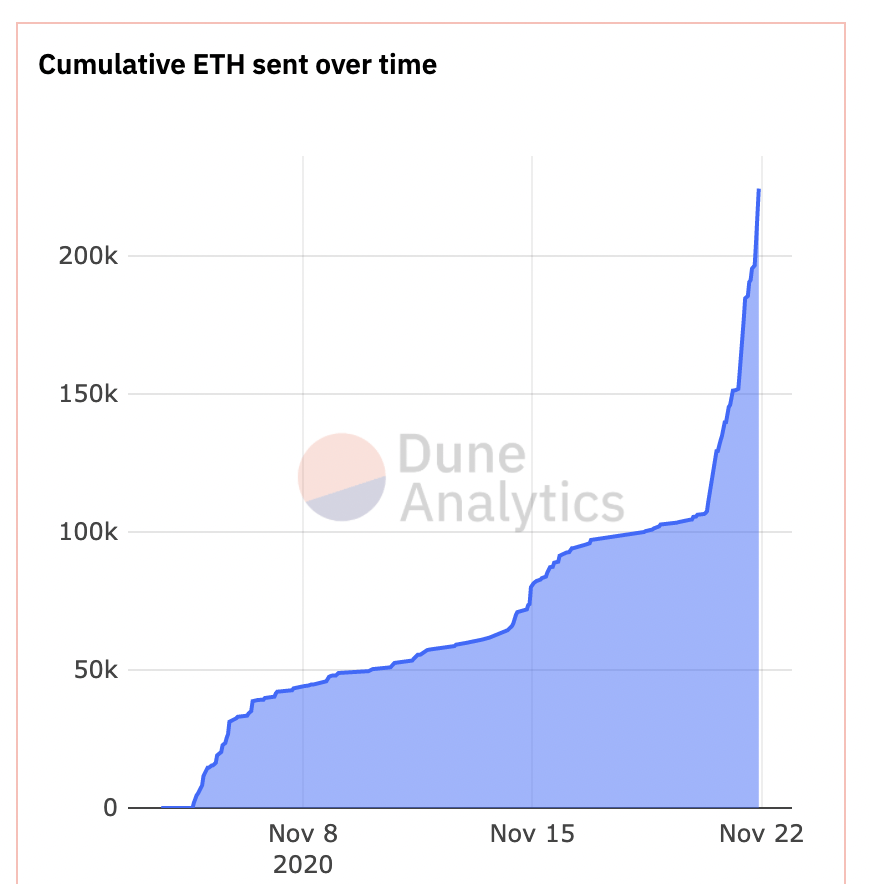 Whales staked more than 25% of ETH

In a report by specialist Camila Russo, it was revealed that at least 3 whales are responsible for about 25% of all staked ETH in the deposit contract. With transactions occurring before the almost parabolic increase in staked ETH, these whales have deposited more than 20,000 ETHs with “15,000 more ETHs on hold”.

On the other hand, a report from Trustnodes indicates that Bitcoin Suisse has at least 100,000 ETH ready for deposit on November 22nd at 23:59 CET. The company has offered its custody service in a staking fund that will be open until the referred date. Blockchain engineer Mikael Bondum told Trustnodes that the deposit made through the company is “similar to staking on your own”. That is, the funds will remain locked up for at least two years. Bondum added:

As long as transferability is not enabled on Ethereum 2, the ether will be locked. We are exploring secondary market opportunities, but nothing is certain.

As a benefit, the users of Bitcoin Suisse services will not have to worry about maintaining a validator node, maintaining custody of the ETH, or making sure to keep 100% uptime. Although, as the inventor of Ethereum, Vitalik Buterin, has said, “nobody expects” investors to keep the funds locked for years. With “60% uptime” an investor can stay profitable, Buterin added.

The increase in investor participation has raised hopes that the goal can be met by November 24. As Russo indicated in her report, at least the transition of the Ethereum to a consensus protocol based on Proof-of-Stake has received great support from its founders:

Ethereum OG’s were and still are believers in Ethereum’s vision, whether you call it proof of stake, Serenity, or eth2. They are putting a lot of capital on the line after sitting on it for so long because they want to be part of making this vision a reality. (…) Regardless, these transactions show some Ethereum OGs are as bullish as ever on the network’s future.

At the time of publication, ETH is at its annual high with $546 with 6.62% earnings in the last 24 hours. In the weekly and monthly graphs, ETH registers gains of 18.01% and 32.15% respectively. The market capitalization stands at $61 billion.