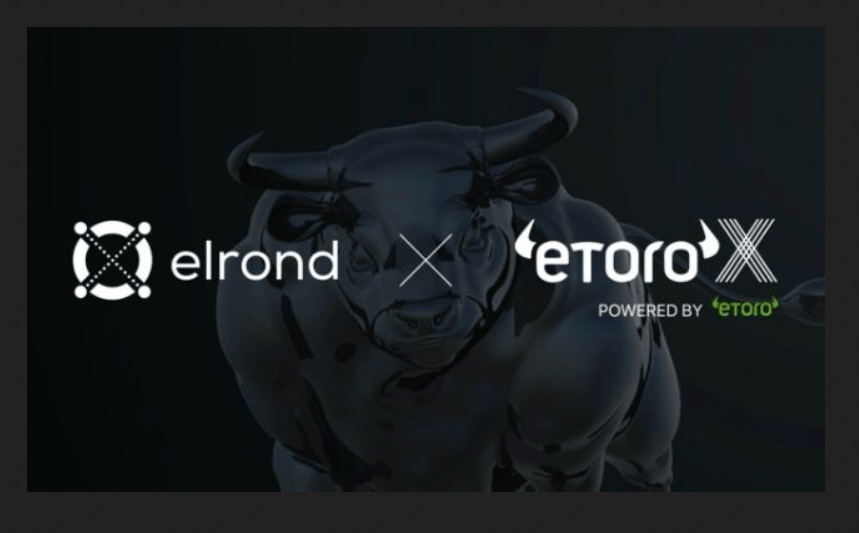 Elrond, a blockchain platform designed to have a performance of up to 1000 times faster than other decentralized networks, has announced that its eGold token will be part of the digital assets and cryptocurrencies offered by eToro’s platform, eToroX. Users will be able to trade with EGLD as of December 23rd of this year.

The eToroX platform has been created to offer cryptocurrencies exposure to professional clients and institutions. In the crypto trading community, eToroX has built a reputation as a highly efficient platform with high security and reliability.

The platform is a product of the giant eToro, as mentioned above, one of the most successful trading companies in the industry. With an estimated value of $2.5 billion, eToro offers asset management, stock trading, commodities, forex, and crypto trading services to its more than 15 million users.

The platform has benefited from the growing institutional interest in Bitcoin and cryptocurrencies as stores of value. BTC has reached a new all-time high since 2017 and is currently in a bullish momentum that has pushed prices throughout the market.

eGold listing has been announced after its platform, Elrond, has managed to offer the first scaling solution based on a sharding architecture. Elrond has an Adaptive Fragment State mechanism and a consensus algorithm called Secure Proof of Stake (PoS). Thus, it is capable of delivering a throughput of 15,000 transactions every second with even greater potential. In public tests, Elrond has recorded a total of 263,000 transactions per second.

In contrast, two of the most important blockchains in the crypto top 10 are far behind Elrond: Bitcoin operates with an average of 7 transactions per second and Ethereum with only 14 transactions per second. Therefore, eGold’s blockchain has been compared to the introduction of broadband internet technology in the early years of the emerging digital connection industry.

In conjunction with high performance in transactions per second, Elrond has announced the launch of its own digital wallet to enable global payments, known as Maiar. The wallet is expected to be launched on January 31, 2021.

This will allow Elrond users to take advantage of a period of rapid growth, increased adoption in the mainstream and crypto industry. The blockchain is focused on implementing features similar to PayPal, Venmo, Google Pay, Apple Pay, among others. However, it will have the advantage of operating without a Know Your Customer (KYC) policy and with low fees. Beniamin Mincu, CEO and founder of Elrond, said the following:

In its 10 years of existence Bitcoin has proven that cryptocurrencies are secure and can serve an important purpose in the internet economy. Elrond opens up a new frontier offering internet-scale blockchain performance, and an intuitive application called Maiar, through which we aim to bring the next billion people to the blockchain space.