In a poll on Twitter, the Flare Networks community voted in favor of launching Dogecoin as an F-Asset, a Flare-based synthetic asset. The startup, which is financially supported by Ripple, is set to launch its mainnet in May this year and is deemed a utility fork for the XRP ledger.

With a total of 11,546 votes, of which 53.1% were in favor of implementing Doge and 46.9% against, Dogecoin will be the third available F asset on Flare’s mainnet, alongside XRP and Litecoin. Through the integration, Dogecoin will be available to be used on the Flare Network along with smart contracts “similar to Ethereum”.

An F-Asset is a representation of another cryptocurrency on Flare with a 1:1 ratio of any asset from another blockchain. Therefore, 1 FDOGE coined on Flare must have the same value as 1 DOGE outside the network. Flare Networks CEO Hugo Phillion stated that the F-Asset protocol is intended to “bring as much value” from the crypto market to Flare and facilitate the entry of new markets into that network.

The Flare community has responded positively to the DOGE news. One user commented that adding Dogecoin would “break the internet” and Flare Network’s team added that it could be the base cryptocurrency to use NFTs in games and digital art. Another user suggested adding all available cryptocurrencies and received the following response from Flare:

The FXRP smart contracts can be considered a reference implementation of the F-Asset protocol. It would then be trivial for other projects to make the necessary adaptations to integrate with Flare.

Other community members jokingly indicated that Tesla and SpaceX CEO Elon Musk will celebrate the DOGE implementation. On several occasions, Musk has shown his support for the currency.

While Musk has not commented on this event, DOGE did experience an increase in its “social volume,” a metric used by the firm Santiment to evaluate the sentiment around a cryptocurrency. DOGE pricing has benefited several times over from the increase in this metric. 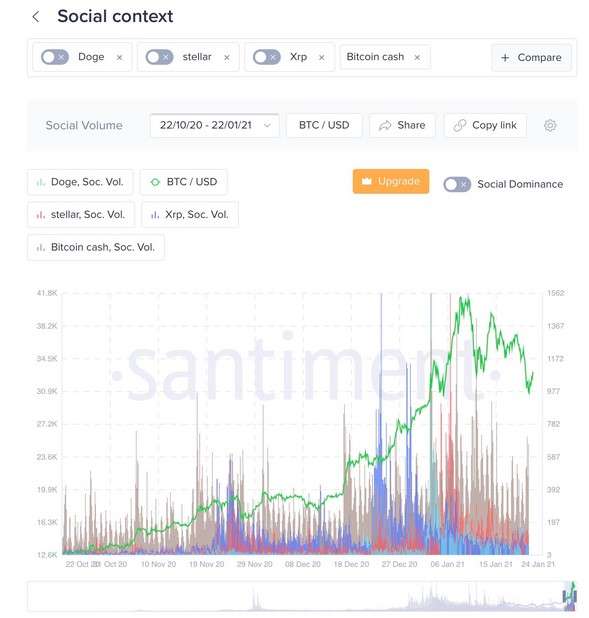 Otherwise, Flare Networks has conducted a similar survey to that of DOGE for the possible implementation of other cryptocurrencies. In a Flare Networks poll where the implementation of XLM, BCH, or BSV was a choice, Stellar Lumens received an impressive majority of votes of 81.4% out of a total of 6,475 participants. The majority of users welcomed the fact that Flare wants to keep adding cryptocurrencies with a “high level of liquidity”.

As reported by CNF, Flare Networks is a project that has raised great expectations in the crypto community. The Spark token (FLR) airdrop is expected to place within the Q1 or Q2 2021. The event will deliver the FLR token to XRP holders who participated in the snapshot conducted in December 2020.