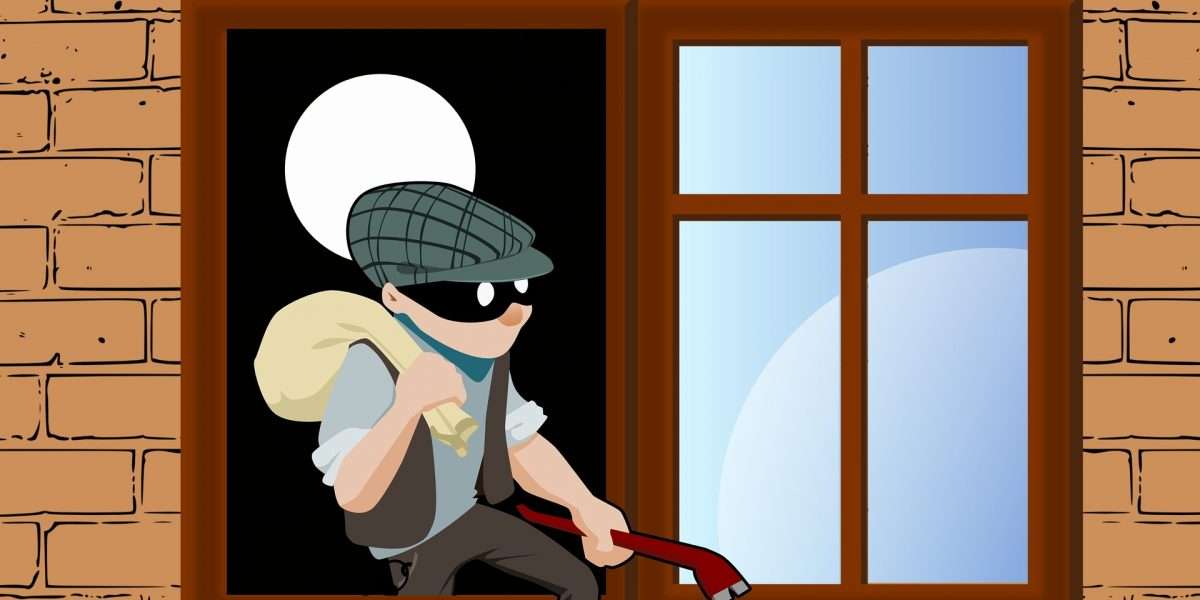 Dog-themed cryptocurrencies have been all the rage recently, with Shiba Inu leading the pack as it shot into the top 10. On the sidelines, however, another project was quietly raising tens of millions of dollars, leveraging this dog theme surge in popularity. Anubis DAO was ideated and developed on Wednesday, raised $60 million on Thursday and by Friday morning, lost it all. Since then, it’s all been about trading accusations, with one developer being accused of a rug pull as Hong Kong police get involved.

According to a well-articulated timeline of the events by one of the people who were at the heart of the project, it all started on Tuesday night. A number of members on PebbleDAO came up with the idea of Anubis, went to work on it on Wednesday and by Thursday, they had created a liquidity bootstrapping pool (LBP) on Copper, a token auction platform.

According to the narrator, who is known in the space as Sisyphus, the biggest mistake they all made was giving one developer, by the name Beerus, full control of the liquidity pool.

On Thursday, the Anubis DAO token sale was an instant hit, propelled by its ‘leaders’ who are famous in the DeFi world. It raised about $60 million from investors – all this despite the project not even having a website. In exchange for their Ether, the investors received the anubis token (ANKH), with the token sale set to go on for 24 hours.

And then it all went horribly wrong

The token sale went on smoothly without any hitches. But on Friday morning, Beerus, the member in charge of the LBP, claimed to have received a malicious link via email. He claimed that the link was embedded in a PDF and that the sender had posed as Sisyphus, one of the founding members. The malicious link had allegedly compromised his computer and may have exposed the private keys to the LBP, he told the members.

Shortly after, 13,556 ETH was pulled from the liquidity pool and transferred to another wallet. Six seconds after receiving the funds, the alleged hacker’s wallet sent it to yet another wallet. This third wallet currently holds all the Wrapped Ethereum which at press time was worth $58,909,083.

The red flags are all over.

He did, however, tweet using another affiliated account, giving a few details about the hack. On this account, he has been keeping the investors updated on what’s going on.

He claims that members of the Anubis DAO community went to work and uncovered his home address and shared it around. He then went to the Hong Kong police and took his computer with him.

I am cooperating with the police and complying with all investigations right now. The claims and posts across Chinese and Hong Kong forums are not true – I did not ghost Sisyphus and the team and I was not the only one with access to the funds – I did not volunteer to handle 1/2

His pleas haven’t stopped many in the Anubis DAO community from accusing him of rug pulling – which is when a developer vanishes with a project’s funds.

Sisyphus, one of the other leaders in the DAO, has volunteered 1,000 ETH as a bounty for anyone who can help figure out who controls the wallet that currently holds the funds. 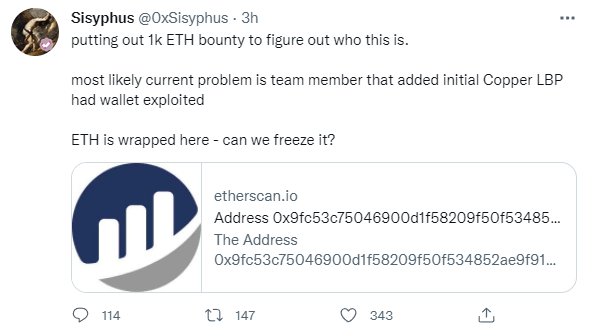 With the funds in the LBP gone and virtually zero liquidity for the ANKH token, it has now effectively gone to zero. On Copper, the chart below showed the token quickly descending to zero as the LBP vanished. Copper has since taken it down. 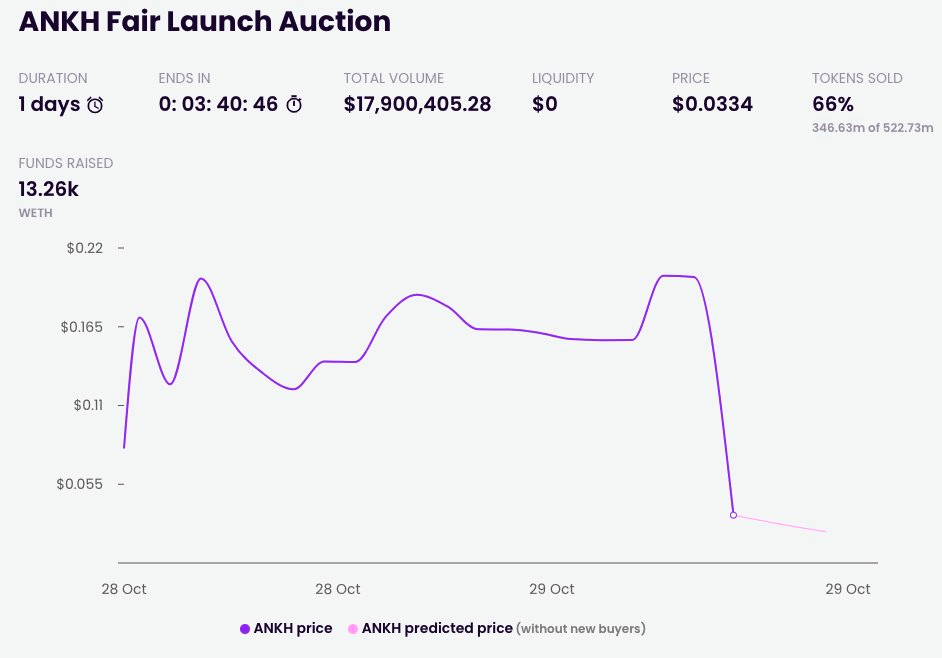 Copper has clarified that the vanishing of the funds had nothing to do with its platform. In a statement, it said:

Neither the Copper platform nor Balancer’s smart contracts have been breached or compromised.

It also revealed that following the Anubis DAO alleged rug pull, another project had popped up on its platform with a similar name, ticker symbol, supply and description. Copper took the decision to remove the listing altogether to protect unsuspecting users.

Many investors have taken to the project’s Discord and other social media platforms to air their anger and frustrations. One of them talked to CNBC, revealing he had lost $470,000.

Brian Nguyen told the outlet that he woke up on Friday to find that the project had gone bust. “It was pretty painful,” he said.

Nguyen admitted that he didn’t do any research before investing in the project.

We, in crypto, tend to have a ‘buy first, do research later,’ mentality.

For him, one of the attractions was the dog theme. In recent times, Shiba Inu and Dogecoin have shown that investors are fond of dog-themed coins and Nguyen believed that Anubis could shoot up just as its predecessors had. The fact that the token sale was on Copper also gave him confidence as it’s a legitimate platform that has been used by many successful projects.