The highly anticipated London hardfork could be just weeks away from being deployed on the Ethereum mainnet according to Ethereum core developers. The developers have proposed block 12,965,000 for the London upgrade which placed the event somewhere around August 4th.

According to Tim Beiko who is a lead developer, a few clients have already approved the proposed block. However, the final decision is set to be made on Friday at the core developer meeting. This is largely viewed as a formality with the community not expecting any serious objection.

Ethereum core devs have proposed block 12,965,000 for London upgrade on Mainnet. It is expected around August 4th.https://t.co/EgHKhrabBzhttps://t.co/5ec2o7OKiD

As CNF reported, the transition to Ethereum 2.0 brings several improvements one of which is introducing fee burning. Last month, Ethereum Improvement Proposal (EIP) 1559 launched on the Ropsten testnet leading to over 88,000 Ether burning in a single day. There are four other major improvements including the shift from the Proof-of-Work model to the Proof-of-Stake model which has been viewed as a more efficient and environment-friendly means of mining. The transition has been applauded by the wider community and even major financial institutions. JPMorgan recently predicted that Etheruem 2.0 will kickstart a more than $40 billion staking industry by 2025.

Ethereum is up by more than 10 percent on the week. In the last 24 hours, the largest altcoin has gained as much as 5 percent. Although investors are keen to see Ethereum get back to the year high of $4,000 and most optimistic analysts see the asset reaching $10,000 by the end of the year, Cane Island Alternative Advisors’ Timothy Peterson has in a research note dubbed ‘Estimating Ethereum’s Adoption Curve and Maximum Price’, shared a model showing the maximum price the altcoin can reach in the next 20 years. In it, the researcher notes that Ethereum can reach a maximum price of between $75K and $175K in the next 15 to 20 years.

Based on an initial price of $2,000 and a 15-20-year horizon, Ethereum’s average annual rate of return would range between 20% and 35%. It should be noted these are conservative estimates. 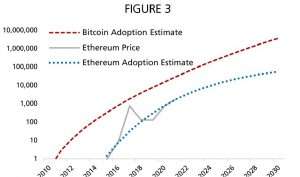 The analyst warns that the estimation is just that, and Ethereum is subject to many changes. As such, the estimation is unsuitable for investment decision-making. Market leaders investing in Ethereum have noted that their interest has spanned from the many projects and products that are being built on the blockchain. If this trend persists, it will be hard no to be as optimistic about the price projection of the largest altcoin.