Yesterday at 15:23 EST, Bitcoin halving was performed at block #630,000. The decisive block was mined by Antpool and the mining reward was reduced from 12.5 BTC to 6.5 BTC. Bitcoin thus reaches a historic milestone and completes the third halving in the still young history of the world’s largest cryptocurrency.

In reference to Satoshi’s first block when he wrote: “The Times 03/Jan/2009 Chancellor on the verge of the second bank bailout,” the crucial block yesterday also contained a message: “NYTimes 09/Apr/2020 With the injection of 2.3 trillion dollars, the Fed’s plan far surpasses the 2008 bailout,” Jameson Lopp shared via Twitter.

The final Bitcoin block with a subsidy of 12.5 BTC was mined by @f2pool_official and contained the following message in its coinbase transaction:

The reduction of the mining reward also drastically reduces the miners’ income, so that further price fluctuations could occur in the coming days and weeks. The maximum available quantity of Bitcoin is limited to 21 million, so that by 2140, after 61 more halvings, the mining reward will drop to 1 Satoshi (smallest unit of Bitcoin) or 0.00000001 BTC.

Bitcoin’s fundamentals are currently speaking a bullish language, with the hash rate reaching a new all-time high of 142 exahashes per second (EH/s). The hash rate is the unit of measure for the computing power of the Bitcoin network and has risen massively in the last days before halving.

The average block size in the Bitcoin network increased twice in May, reaching a new all-time high of 1.341 MB, as shown in the following chart. According to the analysis service Blockchain.com, the block size is currently twice as large as at the time of the halving in 2016. 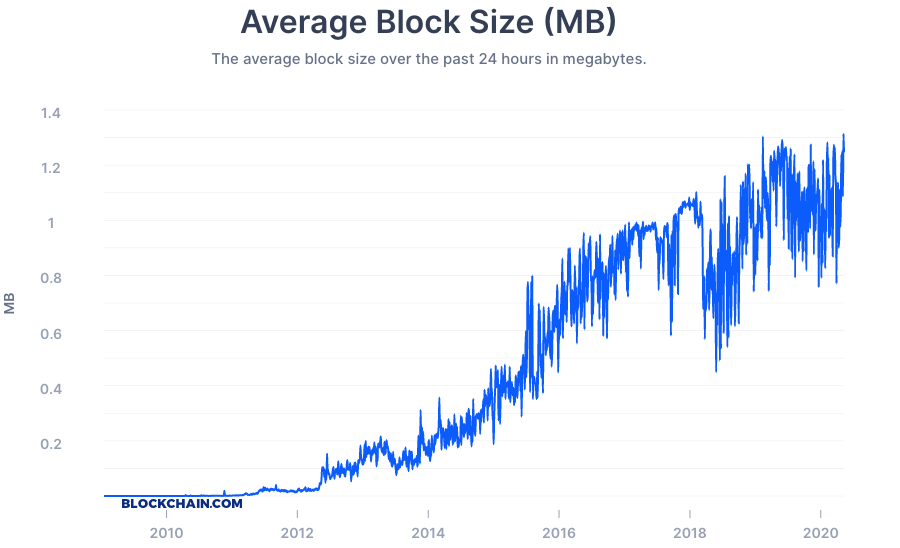 However, the capitulation of the miners predicted by some experts seems to be slowly beginning. Alejandro De La Torre, Vice President of the Mining Pool “Poolin”, explains that some miners already switched off their equipment yesterday before the halving. She describes that mining with old equipment is no longer profitable under the new conditions and that more miners will follow.

Bitcoin now has a lower inflation rate than gold

Another consequence of the Bitcoin halving is that the inflation rate of Bitcoin is now lower than that of the precious metal gold. Gold has been considered a safe anchor in times of crisis for centuries and has survived several wars, epidemics and kings. The following diagram from Electric Capital, which uses data from Coin Metrics, illustrates this development. 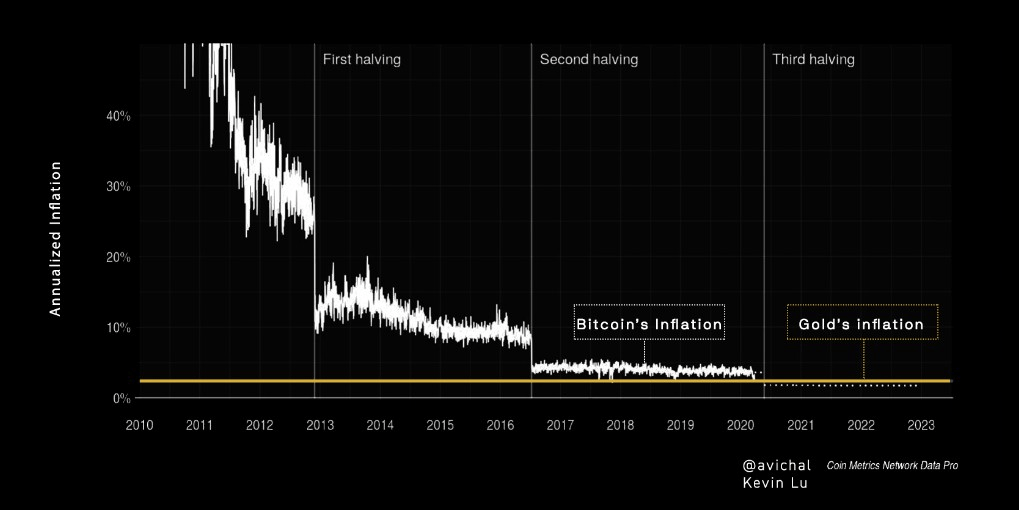 The Bitcoin bull and multiple billionaire Mike Novogratz already emphasized in the past that Bitcoin will reach the status of digital gold. A new study by the news service Bloomberg comes to the same conclusion in a study:

Increasing futures open interest, declining volatility and relative outperformance despite the stock-market shakeout indicates Bitcoin is maturing from a speculative crypto asset toward a digital version of gold.