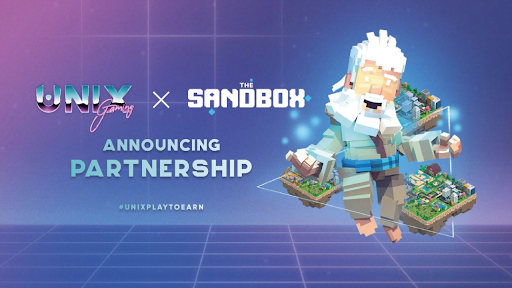 UniX Gaming sees itself as becoming much more than just a play-to-earn gaming guild, with ambitions to evolve into nothing less than a full gaming ecosystem, aided by a new alliance with The Sandbox metaverse.

With the new partnership, UniX said it sees itself becoming an “ecosystem builder” of virtual worlds in The Sandbox, which is one of the most popular metaverse platforms on the Web.

UniX is one of the biggest guilds in the crypto-based play-to-earn gaming space, with more than 5,000 scholarships enabling some of the world’s best gamers to compete for NFT-based rewards on some of the most popular esports titles. P2E gaming is popular but the need to purchase NFTs before it’s possible to start playing means there’s a very high entrance barrier. UniX helps players to get over this through its scholarship program, lending promising talents its own NFTs so they can start playing, splitting whatever rewards they earn.

While there are other guilds doing the same thing, UniX sets itself apart with its focus on education and training, ensuring that it gets the most bang for buck from each of its scholarships and increasing the rewards paid out to its community.

The P2E gaming space is tightly connected with The Sandbox, which is a gaming metaverse that allows participants to buy virtual real estate and build 3D worlds complete with buildings, stores, entertainment spaces and more where participants can freely interact. The Sandbox also allows real estate owners to host games and monetize them through NFTs, which can be sold on its marketplace.

While a number of forward thinking brands have already built their own virtual worlds within The Sandbox, including Adidas and The Walking Dead, UniX believes the idea will catch on and appeal to many more. And it wants to position itself as their go-to partner for when the time comes.

UniX plans to use its proprietary game-maker tool based on Unity to help companies develop land they buy within The Sandbox, building new environments, buildings and more. It will also help brands to develop new mini-games within the metaverse. UniX’s community will have a big say with this, it promised. It has invited the community to suggest mini-game ideas on Telegram, and said it will put the best ones to the vote. Then, it will work with its new gaming studio 1Mhz Studios to develop the best ideas.

In addition, UniX said it’s planning to build its very own virtual world within The Sandbox and also implement its own educational platform.

“We are exhilarated about this partnership, we have a lot of plans that we want to bring to life in The Sandbox,” said UniX co-founder and CEO Mirko Basil Doelger. “Our collaboration with them will not only bring us great pleasure but we are also excited to support other projects to join the ecosystem too.”

UniX promised that its close involvement with The Sandbox will bring big benefits to the community, raising awareness of its own platform, providing opportunities to partner with well known brands that will, hopefully, raise its own token price.

UniX clearly has big plans for The Sandbox and it doesn’t really come as a surprise, given that it has already expanded well beyond its gaming guild roots. Besides its focus on scholarships, UniX is also working on two of its very own P2E gaming titles, the first of which will be launched later this year. In addition, UniX has also promised to launch its own P2E game launchpad, giving developers a way to raise funding and build awareness around new titles they’re planning.