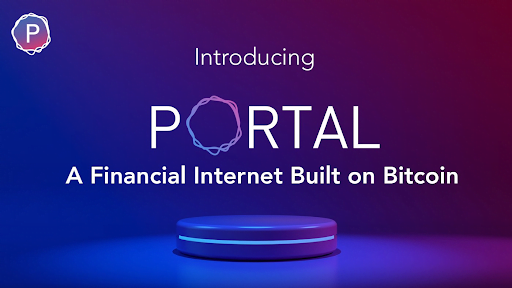 Portal, a self-hosted Layer 2 wallet and cross-chain decentralized exchange (DEX) on Bitcoin has announced the successful completion of an $8.5 million funding round. Coinbase Ventures led the round, with OKEx, DFINITY, ArringtonXRP Capital and senior executives and founders of Ethereum among those who participated.

Portal brings the unlimited opportunities of DeFi to Bitcoin. It offers anonymous, zero-knowledge swaps through its cross-chain DEX that it touts as ‘genuinely trustless.’ It offers a better alternative to the stop-gap solution of minting wrapped tokens such as wBTC or the even riskier staking with intermediaries. It allows virtually anyone to offer DeFi as a service while maintaining anonymity within open and transparent markets.

Some of the other investors that participated in the funding round are Roger Ver’s Bitcoin.com, Mike Novogratz’s Galaxy Digital, the USDC stablecoin conglomerate Centre.io, the leading stablecoin Tether, Adam Back’s Blockstream, security tokens project Polymath and GenBlock Capital, which has invested in successes such as 0x, FTX, Filecoin and Solana.

Commenting on the investment, Michael Arrington, the founder of TechCrunch and ArringtonXRP Capital stated:

Brain Johnson from Republic Capital, which also participated in the round, is just as optimistic about the future of Portal. In his remarks, Johnson expressed his belief that interoperability will define the future of blockchain technology and will determine whether it can finally get mainstream adoption.

“Republic Capital invested in Portal with this future in mind. Utilizing Bitcoin’s security as an anchor, we believe the Portal and its team are in a unique position to build one of the leading bridges in DeFi,” he stated.

The funding comes just weeks before Portal launches its public token sale on the Republic.co launchpad.

The platform offers the speed and liquidity of centralized platforms, but on Bitcoin. It finally unlocks Bitcoin’s potential in DeFi, be it for peer-to-peer lending and borrowing, spot markets, or options. It relies on its Layer 2 and Layer 3 technology, known as Fabric, which is an open-source toolbox for deploying censorship-resistant layers on Bitcoin.

Portal CEO Eric Martindale commented, “By bringing a fast, peer-to-peer, Layer 2 exchange — with the speed of centralized exchanges but with privacy — Portal is delivering on the promise of self-sovereignty for everyone.”