Ripple’s XRP has been showing strong volatility over the last few hours over the confusion of its re-listing on crypto exchange Coinbase. Earlier today, the XRP price shot all the way to a high of $1.23, surging 14% northwards.

This happened after a false listing alarm on Coinbase’s professional trading platform Coinbase Pro. A technical glitch taking place on Coinbase showed some traders that XRP is available back for trading on the platform.

Coinbase had delisted XRP trading earlier this year in January after the SEC lawsuit last December. This rumor of re-listing was enough to trigger XRP’s euphoric move to the north. In an update, the Coinbase Pro platform noted:

As previously announced, Coinbase has suspended trading in XRP. Due to a technical issue, XRP was temporarily viewable on the Coinbase Pro mobile app for some customers but was not tradeable.

However, soon after Coinbase’s confirmation, XRP is back trading in the negative zone. As of press time, XRP is trading 2% in the red at a price of $1.09 and a market cap of $50.7 billion. 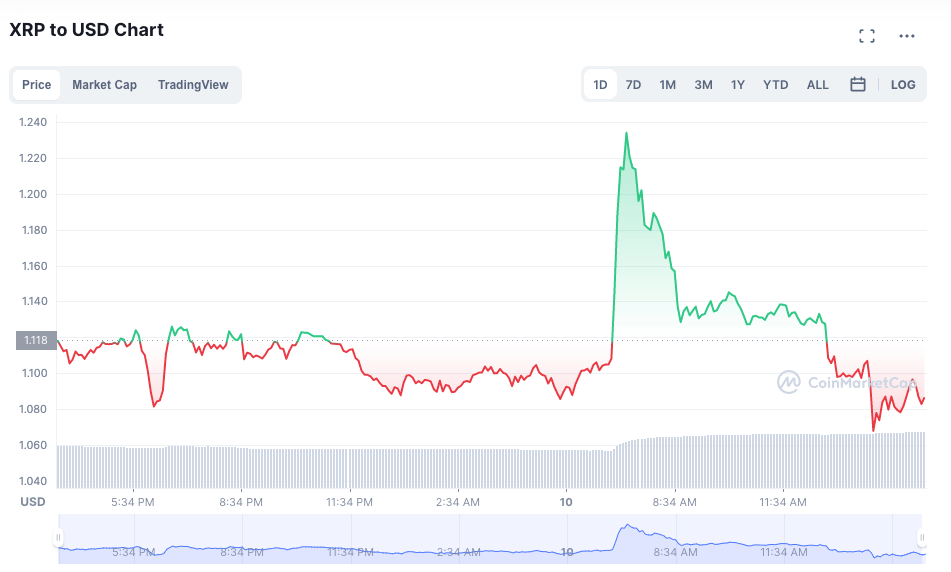 As reported by on-chain data provider Santiment, the recent bounce back in the XRP price was followed by a strong uptick in the address activity.

📈 #XRP just enjoyed another 10% burst, minor pullback, and now another leg up at the time of this writing. A continued great leading metric for $XRP is address activity. When unique addresses suddenly spike a price rise usually follows in the mid-term. https://t.co/TIJJYFrkYy pic.twitter.com/VSkLRyiXEJ

XRP hasn’t quite participated much in this year’s crypto market rally thanks to Ripple’s eight-month-long ongoing fight with the U.S. Securities and Exchange Commission (SEC). In Ripple’s recent request to Admission 99, the court filing unveiled crucial information regarding the lawsuit.

In the document, the SEC admitted that it never informed any third party about SEC’s ‘security’ status before filing the lawsuit against the blockchain startup. In response to Ripple’s request for Admission No. 99, the SEC wrote:

Subject to all of the foregoing objections, the Commission admits that before the filing of this case certain third parties inquired about the legal status of XRP. However, the Commission did not state a view one way or the other in response.

The fight between Ripple and the SEC has just got murkier with time. Ripple is seeking clarity on whether SEC employees were cleared to trade in securities and digital assets. However, the SEC has objected saying that it will compromise the financial details in the SEC’s Office of Ethics Counsel. The regulator said:

The commission reveals that the preclearance guideline specifically states that by, clearing a request to enter into a financial transaction, it does not determine as to whether the transaction complies with the securities laws. That express statement by the Ethics Counsel renders irrelevant the pre-clearance information Defendants seek.

Related: We must stand with Ripple and Coinbase against the SEC, and here’s why