A report from the U.S.-based banking institution Citibank published some of the most bullish predictions about Bitcoin’s price as conservative. Shared by analyst Alex, the report was written by fund manager Tom Fitzpatrick and begins by stating that Bitcoin is the gold of the 21st century.

In addition to having characteristics as a store of value that makes it equal to or more efficient than gold, Fitzpatrick makes a comparison between the coming out of both assets into the mainstream media. Both preceded a change in the traditional market, for Bitcoin it was the 2008 crisis that pushed interest rates to 0 and a “QE (Quantitative easing) Massive”.

The report indicates that the U.S. Federal Reserve has implemented monetary policies that “debased” fiat currency. Such measures have been exacerbated by the financial crisis following the Covid-19 pandemic and “historically have been good for gold” and now for Bitcoin. BTC characteristics (portability, limited supply, anonymity) make it a superior version of a store of value. In the years following the pandemic, Fitzpatrick believes that these features will be key to preserving personal wealth and avoiding immense fiscal deterioration:

While Bitcoin may be subject to more regulatory constraints going forward it is a natural store of “money” to avoid this. Indirectly the argument can be the debasement of FIAT currencies by creating high nominal growth and inflation.

In reviewing Bitcoin’s performance over the last decade, Fitzpatrick finds that the cryptocurrency has gone through periods of rally followed by a bear market that can last for years. The analysis indicates that BTC is currently in a rally that could conclude in 2022 with a peak in December 2021 that will put the price of the cryptocurrency at $318,000. However, Fitzpatrick believes that this scenario is “improbable”. Either way, an increase to those levels would be among the lowest for Bitcoin in percentage terms.

Bitcoin Toward $1 Trillion in Market Cap

In the crypto community, the report is considered highly bullish and an indicator of the growing institutional adoption of Bitcoin. The writer of the book “Bitcoin Standard”, Saifedean Ammous, highlighted the change in the institution’s vision:

In May 2016 I met Citibank chief economist Willem Buiter at a conference in Oxford & explained bitcoin to him as he shouted nocoinerisms.

I offered to bet him bitcoin will outperform citi over 5 years. He smartly refused

Senior commodity strategist for Bloomberg, Mike McGlone, has been equally bullish on Bitcoin. Although he expects BTC to add another 0 to its price in 2024 placing it at $100,000, McGlone agrees with Citibank’s report and claims that Bitcoin is a digital version of gold. Expecting a drop in BTC volatility, McGlone has predicted an increase in market capitalization once the cryptocurrency reaches $55,000 probably in the next two years, according to his predictions:

$20,000 Bitcoin is Primary Hurdle Toward $1 Trillion Market Cap — The digital version of #gold but with more-limited supply and a history of adding zeros, appears to be in an early price-discovery stage and may simply continue its ascent in 2021. Mainstream adoption is rising. 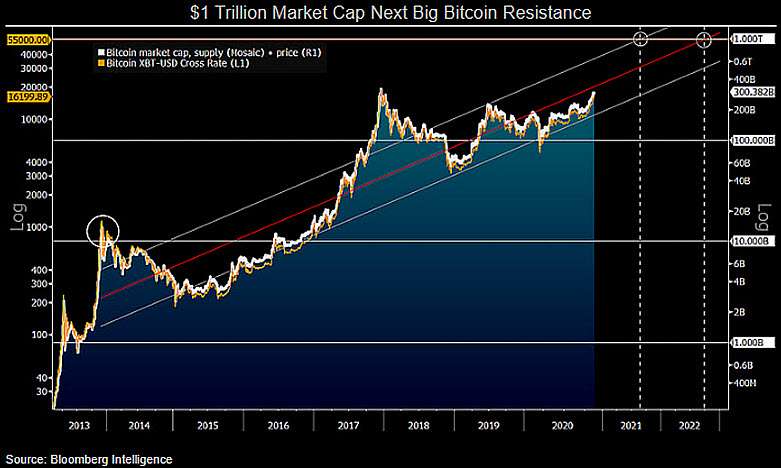