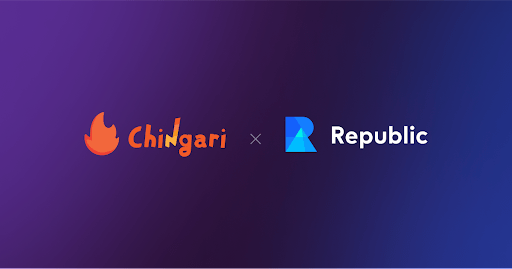 Chingari, the leading video sharing app in India, has announced the upcoming public token sale of its native crypto token $GARI, to be held in November. According to the announcement, Chingari’s public token sale will be spearheaded by Republic, a financial technology firm headquartered in New York.

Launched back in 2018, Chingari’s fundamental architecture follows a similar concept to Tiktok’s video-sharing model. However, contrary to centralized social media platforms, Chingari seeks to give more control to creators through a Decentralized Autonomous Organization (DAO) model powered by its native token, $GARI.

Chingari’s Co-Founder and CEO Sumit Ghosh has commented on the upcoming $GARI public token sale, noting the potential in giving back power to creatives,

While the creator economy is burgeoning and creators are becoming a pivotal force of this revolution, we believe that creators should be in charge of how the platform is taking shape. With the introduction of $GARI, we are vesting the decision-making powers back in the hands of the users and enabling content monetization to become more mainstream in India.

With $GARI, creatives on Chingari will be able to monetize their content by setting up e-commerce spaces that cover physical merchandise and NFT creations. In addition, fans will have an opportunity to fund their favourite creatives through the $GARI token.

Chingari’s public token sale partner, Republic, also commented on the upcoming event. The team, which is experienced in assisting crypto-focused startups in raising funds, is particularly enthusiastic about scaling the potential of Web3 ecosystems for both investors and innovators,

Republic is thrilled to support such a dominant Web2 application in their journey towards Web3 and a future where all ecosystem participants can be rewarded for their efforts. We truly believe that the GARI token DAO will set a new standard in how traditional companies can reward their users, and build an economy that is both active and meaningful to their users.

Notably, Chingari recently completed a $19 million funding round that attracted prominent investors from the crypto industry, including Solana Capital and Kraken crypto exchange. The upcoming public token sale will be another major milestone for the video-sharing app; Republic is optimistic that the event will gain massive traction amongst small and big investment firms.