While the majority of the crypto market continues to consolidate after the multiple crashes of the last few days, Chainlink (LINK) has seen a strong upward movement in the last 36 hours. After trading at $9.65 yesterday morning, the LINK price has risen to as high as $13.10 during the course of the day. At the time of writing, LINK is trading at USD 12.64, posting an increase of almost 14% in the past 24 hours.

However, despite the bullish movement, some experts have expressed doubts that LINK can hold the recent gains. According to the analysis of the trader “Dark Matter”, the zone between USD 13 and USD 13.50 on the 4-hour chart must first be regained in order for a further upward trend to be confirmed. In the long term, the failed breakout from the end of August to over $17.16 USD must be broken before new highs are realistic.

$LINK update – still not within my levels of interest. Reclaim the blue box (LH) AND the 17.16 mark, before talking about going higher. This is good for scalping, for now. No swing position here. 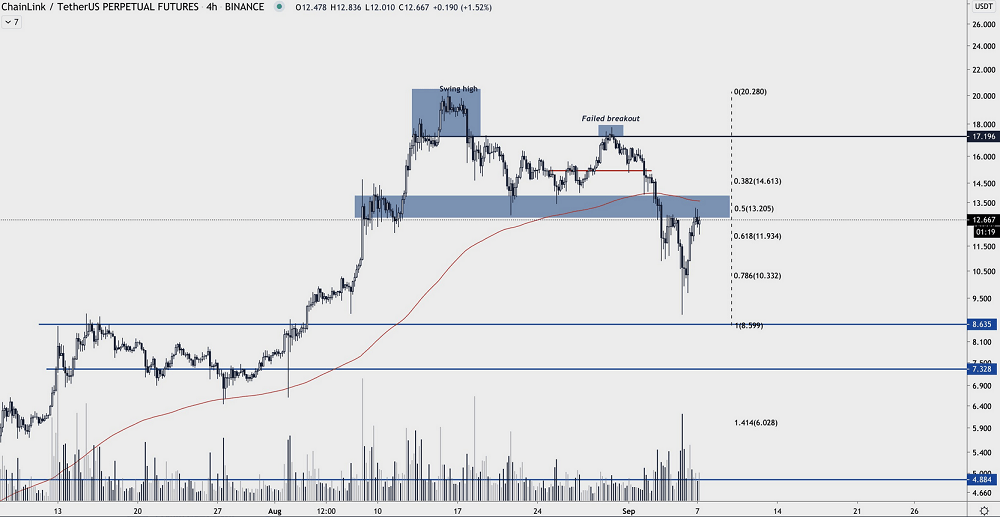 Other analysts, however, were less optimistic. For example, the co-founder of Bockroots, Cantering Clark, showed a chart showing that the Chainlink price could collapse to $5.00, a level that coincides with both horizontal support and an important moving average that has led its upward trend since the beginning of the year. Before yesterday’s uptrend, Clark commented on the chart below as follows:

You hate to see it. But I am confident in it.

“Dread it. Run from it. Destiny still arrives all the same.”

Irrespective of this, the trend of the Chainlink (LINK) price in the coming days and weeks is also likely to depend on the fate of the entire crypto market and in particular the Bitcoin price and its ability to stay above the psychologically important $10,000 mark.

Chainlink price could be driven by LINK function calls

Beyond the technical analysis and market sentiment, Timothy Peterson of Cane Island Alternative Advisors pointed out another important factor for the LINK price. As Peterson explained, LINK’s valuation is heavily dependent on LINK function calls, which have declined significantly after the recent crashes.

Consequently, according to Peterson, based on the analysis of the function calls, a LINK token is currently worth around $5 to $8. If the number of function calls continues to increase at the current rate, a justified price for LINK could be around $10 by the end of the year, if the following chart and Peterson are right.