Charles Hoskinson, founder of Cardano and CEO of Input Output Hong Kong (IOHK), announced a few hours ago that the Ouroboros Byzantine Fault Tolerance (OBFT) hard fork has been successfully implemented. This heralds a new era for Cardano and is the first step in moving Cardano’s Proof of Stake protocol, also called “Ouroboros”, from the Byron phase to the Shelley phase.

With the activation of the hard fork the mainnet of Cardano, also called Byron, has been upgraded from Ouroboros Classic to Ouroboros BFT. The hard fork, which pragmatically was only a technical upgrade, moves the mainnet towards the Shelley era. It builds a bridge between Ouroboros Classic, which is currently still used in Byron mainnet, and Ouroboros Genesis, which will underlie the Shelley era, as the following graphic on IOHK’s roadmap illustrates. 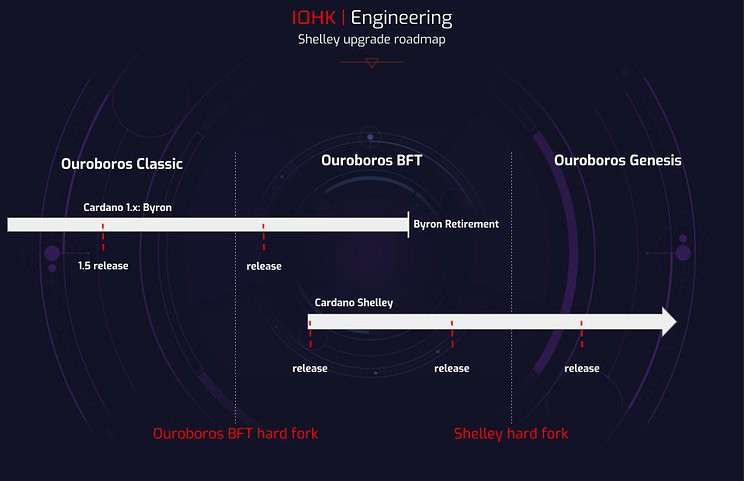 With the OBFT hard fork all nodes were requested to switch to the new Cardano client. The Haskell implementation is the result of 18 months of development, as IOHK enthusiastically announced before the launch, and consists of two main components: the Cardano node and the Cardano explorer backend as well as a new web API. Both technologies ensure that Cardano’s architecture is scalable, agile and interoperable. Among other things, the code base was converted from a monolithic to a modular node.

Regarding a launch date of Shelley in the mainnet Hoskinson recently stated that there is no concrete date yet, but he also mentioned in an AMA:

My intention is to have the Shelley Mainnet launch in Kyoto and have a very large launch party and invite our Japanese community, people from around the world, our product team and our core developers. […] It would be very nice to launch Cardano with cherry blossoms in the most beautiful city in the world and that in a beautiful time. I would like to do it in spring, in summer, and the earlier the better.

According to the calendar, the cherry blossom in Kyoto this year will be from March 20 to 29.

Cardano (ADA) owners don’t have anything to do following today’s update. However, shortly before the hard fork, IOHK asked users of the Daedalus wallet to check if they have the latest version (0.15.1) installed. Users of the Yoroi Wallet do not need to install an update.

Ahead of the Ouroboros BFT update, Daedalus users should check they are using the latest version 0.15.1 to ensure continued optimal performance. You can check which edition you are using by checking the top of the application window. #Cardano #CardanoCommunity pic.twitter.com/4sBsUABQx5