The company behind the development of Cardano, Input Output Hong Kong (IOHK), announced the launch of the mainnet for the Daedalus 1.0.0 wallet. IOHK CEO, Charles Hoskinson, made an update on the launch through YouTube.

Daedalus 1.0.0 is the result of 18 months of effort of IOHK, as Hoskinson said. The company has worked to reconstruct the Daedalus base code with the Haskell high security code. Thus, IOHK tries to offer the best quality and security to its users. Besides, the Serokell code was completely eliminated due to the Byron Reboot:

At the moment Byron is in everyone’s hands including exchanges, customers, and everyone in the network. We are watching the relays upgrade at 2 gigabits a second due to rapid updates. Old customers are coming back and we are seeing activity in wallets which have been dormant for two years.

In addition, it was revealed that the synchronization of the wallet will take about 50 minutes to an hour and a half. Another improvement is related to the restoration of the wallet which will now take about 30 minutes. In comparison, before this release the synchronization time for the Cardano wallet was 9 to 14 hours. To restore the wallet, the user needed 14 hours. IOHK’s CEO said that the Daedalus 1.0.0 release will allow the team to concentrate on other areas like support for the Ledger hardware wallet, paper wallets and other important projects for the future of Cardano. Therefore, IOHK published the following:

May is the month when we start rolling out the Shelley infrastructure as well as the testnets. We will follow the same process as we did with the Byron reboot, beginning with a small test group. More people will subsequently receive access. At the end of the month there will be a new product seminar.

Afterwards, the balance verification is expected to arrive. Later, there will be a launch for Shelley’s client. After that, “the Shelley era will have begun.” Then, as Hoskinson said earlier, Cardano’s future can begin to be in the hands of the community. The next step for IOHK will be Goguen.

Below you can see the video with the installation instructions for Daedalus 1.0.0 with Darko:

Cardano gets an A for foundation improvements

On the other hand, the Cardano Foundation published the results of the classification made by the Fundamental Crypto Asset Score (FCAS). The FCAS gave Cardano an “A” and places it among the “attractive” assets of cryptocurrencies. The FCAS rating takes into account the following fundamentals: user activity, developers’ behavior and maturity in the market.

According to the FCAS in its evaluation, Cardano has grown in all these aspects with maturity in the market of 8.32% in the last 6 months, scoring 806 points out of 1000 in this classification item. In addition, its score for Liquidity was 944 out of 1000. In user activity, Cardano recorded 764 near his network activity which was at 793 points out of 1000.

In all other aspects, as can be seen in the image below, Cardano performed good and better than the average.The Cardano Foundation said: 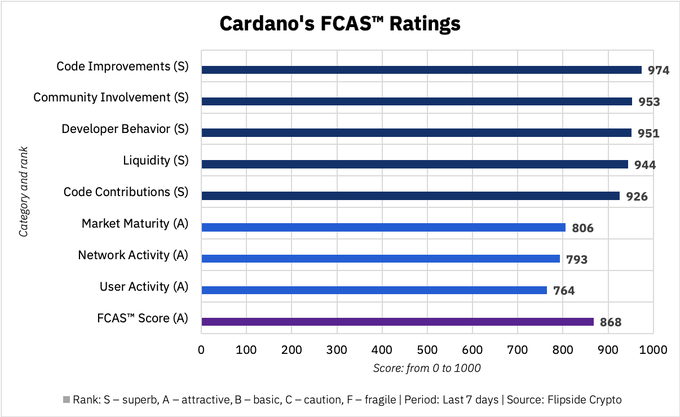