During yesterday’s January update, IOHK reported on the progress of the development of Goguen. The era and its components are eagerly awaited by the community, as it will allow Cardano to enter the DeFi sector. The full deployment of Goguen is expected to be completed somewhere in the second quarter of 2021.

IOHK’s team recently tested the HFC event on the staging testnet, Hammond said. The testnet will be released to allow the stake pool operator to experiment with the functions in the state with which they will be deployed on the mainnet. By doing so, bugs or problems can be found and fixed. Also, users will experience a huge performance improvement, as Hammond said:

With Mary we will be releasing version 1.25 of the node and that has been reported to be more efficient than the existing one. Expect to see performance improvement in network operation.

Vukasin Vukoje talked about the token pre-production environment. Launched during the December 2020 holiday season with the “Allegra” HFC, Vukoje confirmed that more than 300 tokens were created since then. To issue a token there are still complex steps to go through, but Vukoje said IOHK is working to simplify the whole process and added:

In general, we remain to make sure that the process is seamless and that you (the user) have greater visibility into the token you have minted.

IOHK also revealed that they have successfully tested the other component of the multi-asset environment, the ERC-20 converter. This feature has also caused great anticipation because of the possibility it will give developers to migrate their Ethereum tokens to Cardano. In anticipation of the soon-to-be-released ERC-20 converter, IOHK has redesigned the dashboard to be “more aligned” with the Cardano brand.

To demonstrate some basic functions of the ERC-20 converter, Vukoje used the MetaMask wallet, connected it to the converter and migrated funds in DAI from the Ethereum network to the Cardano network. Vukoje was able to convert the stablecoin in a few steps.

IOHK Project Manager Aparna Jue stated that the token pre-production environment will remain active. In parallel, IOHK is working with exchanges to integrate Cardano’s new features. As the image below shows, before “Mary,” the ERC-20 converter, native tokens and the new Node 1.25 will be integrated into a staging environment. 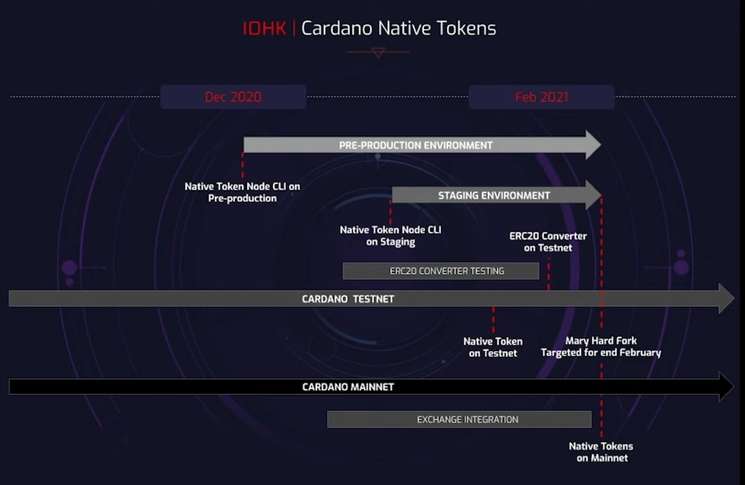 After that, there will be one final HFC event before the full deployment of Cardano’s smart contract capabilities.