For the longest time, Cardano’s biggest criticism was that it lacked smart contracts and this deterred its use as an NFT and DeFi network. Input Output, the company that caters to the development of the network, launched smart contracts via the Alonzo upgrade on September 12. This was expected to take ADA to new heights. However, the price charts tell a different story and the token has been going down ever since, even when Bitcoin and other altcoins were setting new highs.

At press time, ADA is trading at $1.60. And while it’s up by 5.7 percent in the past day, it’s still more than 10 percent below the level it was trading at a week ago. 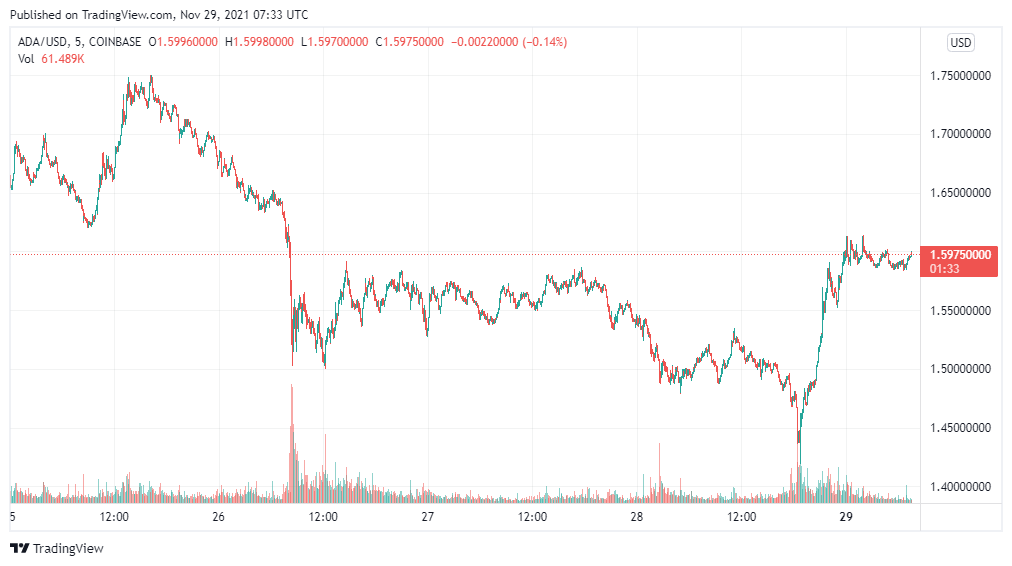 At this price, ADA now has a market cap of $53 billion. This has seen it slip out of the top five, with Solana at $62 billion taking its place. Cardano is not even in the top 10 for trading volume at $2.2 billion, with some new tokens like Gala seeing higher volume.

For context, in early September, Cardano was trading at over $3, hitting its all-time high at $3.09 on September 2. Just a week earlier, it had dislodged Binance Coin to become the third-largest cryptocurrency in the market. The market was in great anticipation of the Alonzo hard fork, pushing prices higher at the time. However, it seems to be the old case of “buy the rumors, sell the news.”

Upon launch of the Alonzo upgrade, ADA price pumped slightly, but this was short-lived. Since then, ADA has seemed to detach from the overall market, and not in a good way.

Bitcoin pumped earlier this month to hit a new record just shy of $69,000. Ethereum pumped hard as well and hit $4,860. Solana had hit its all-time high at $260 just days earlier, and Polkadot was also enjoying a new record at $55.

ADA failed to shoot up with its peers. In fact, when BTC hit its record, ADA was trading 32 percent below its ATH.

But while the price has failed to impress, the Cardano ecosystem has continued to grow aggressively. The number of transactions has grown steadily, with the launch of smart contracts seemingly giving these numbers a boost as data from IntoTheBlock shows.

As CNF reported recently, Cardano hit a new milestone by reaching 20 million transactions. Days earlier, it had even flipped Ethereum in daily transactions. albeit shortly.

Charles Hoskinson, the Cardano founder, isn’t concerned with the price and believes Cardano’s time is coming. He recently described it as “a future proof design and we are systematically building towards it together with the strongest and most engaged community brick by brick.”

Popular analysts including Lark Davis and Michaël van de Poppe are also bullish for the future of ADA.

I feel like it is about time for #cardano to start taking off again.