Even though the launch of Shelley in the Cardano mainnet is not yet fully completed, it seems that all hurdles for the second development phase have been taken to successfully implement the hard fork. Thus, Charles Hoskinson announced yesterday via Twitter that he will take a social media break until July 29th, the date of the hard fork combinator, to focus on the third development phase of Cardano, Goguen.

Alright Kids, this week has been action packed and exhausting, but we made some incredible progress. I'm taking a social media and AMA break until the hard fork on the 29th to deep focus on Goguen and the next parts of the roadmap. See you soon. pic.twitter.com/ECiDVD2QVq

Goguen will make Cardano ready for use in enterprises

IOHK’s product manager Nebojsa Vojvodic announced new details about this development phase during the Cardano Virtual Summit. As Vojvodic explained, Shelley is laying the foundation for a robust, decentralized network for Cardano based on stake pools and delegation. In the meantime, IOHK is already working on the development of Goguen, which is scheduled to be launched in mainnet by the end of the 4th quarter of 2020.

Goguen will enable developers and dApp builders to use the custom programming languages of IOHK, Plutus and Marlowe, to create smart contracts without requiring extensive knowledge of blockchain development. It will also allow the development of decentralized applications (dApps) and the creation of new assets on the Cardano blockchain.

According to Vojvodic, this makes Goguen an important building block in the creation of a global social and financial system on Cardano, as it enables both IOHK and others to develop solutions for applications in the areas of supply chain, real estate management or decentralized finance.

IOHK’s goal is to create a system that can be seamlessly integrated into existing applications, especially off-chain. Companies will not be locked into the Cardano ecosystem, but will receive an interoperable platform. This, according to Vojvodic, will make Cardano attractive to companies and governments, which was the top priority in the development of Goguen. With the new features, Goguen will also primarily target developers, who will get tools to develop applications on Cardano with the upgrade.

The roadmap for Cardano’s Goguen launch

The roadmap for Cardano’s Goguen was also presented during the Virtual Summit. According to this, a testnet is to be published in the third quarter of this year, which will also contain the basics for the multi-asset standard and Plutus. A mainnet release of Goguen is planned for the end of the fourth quarter of 2020. 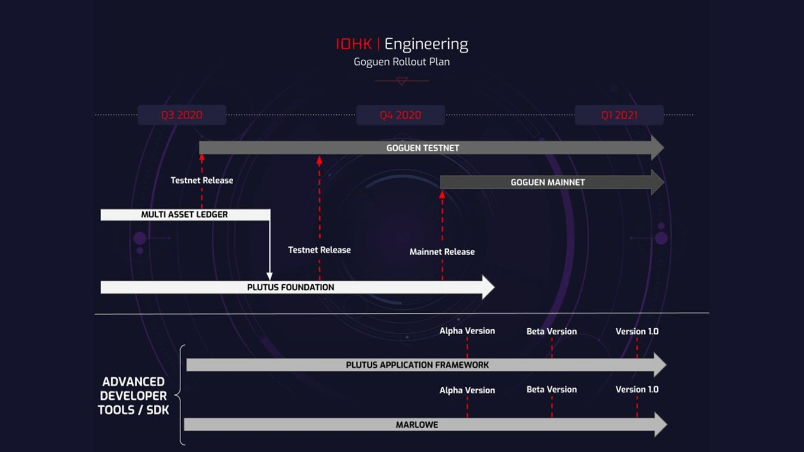 In particular, developers will be able to test the native tokens on the Cardano blockchain, the “Token Builder” and the basics of Plutus by the end of the third quarter. During the fourth quarter, the Plutus Application Framework is expected to be released in an alpha version, which will allow developers to build dapps. A beta version of Marlowe is also expected to be released in the fourth quarter.

Similar to the launch of Shelley, there will also be a “pioneer phase” in which “friends and family” will test Goguen. In addition, partners  will be included in the test, which IOHK calls “Plutus Innovators”. To promote development on Cardano, there will be various testnets, workshops and hackathons during the introduction phase. 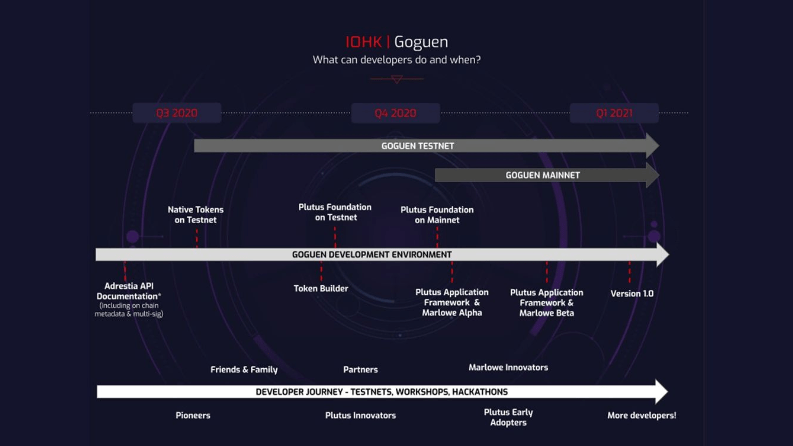