After Input Output Hong Kong (IOHK) has made great strides in the development of Cardano and towards the release of Shelley in the last few weeks, the time has finally come. IOHK has published a detailed rollout plan for Shelley. According to this, the Cardano Shelley hard fork will take place on July 29th, 2020, the first staking rewards at Shelley mainnet will be available from August 18th. 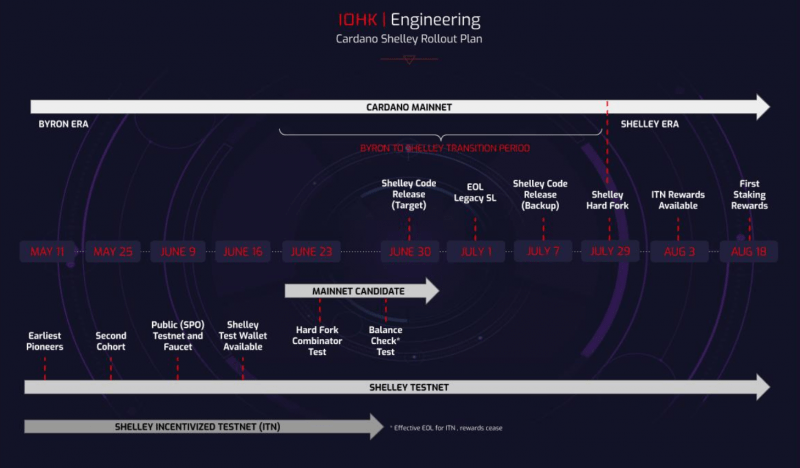 When is Cardano’s Shelley coming?

The rollout plan was presented yesterday by Charles Hoskinson during a crowdcast. As Hoskinson explained, the release will take place in 11 steps. With the launch of the Friends & Family test network on May 11th and the second group of stake pool operators joining the test network on May 25th, the first two steps have already been completed.

The next milestone is on June 9th, when the Haskell Shelley test network will open for all who want to run a stake pool. On June 16th, the public test network will be opened to all users, with all components, such as the backend, the node and the wallet, being put together, as Hoskinson stated.

On June 23rd the Combinator hard fork will take place. The idea behind the Hard Fork is, as Hoskinson described, to have a test net that works like the mainnet:

Basically the idea here is that we going to have something that looks like the mainnet and we going to go from Byron to Shelley the verify all that moon math that those wizards did […] if that works.

Provided this test runs smoothly, the Shelley client will be released on June 30th and will be available for anyone to download. As a precaution, in case there are problems, July 07 is available as a backup. Users will have four weeks (or three weeks) from that date to upgrade their software until the Shelley mainnet hard fork on July 29th.

In the meantime, exchanges will be asked to upgrade their interfaces and software, as the old Byron components will be switched off. A few days after the Shelley mainnet hard fork, the Shelley Incentivized Testnet (ITN) rewards will be available on mainnet on August 3rd.

By August 18th, all operators will also have to set up their stake pools to produce the first blocks of Shelley mainnet from that date. From that day on, ADA owners will also be able to earn staking rewards and delegate their ADA.

Finally, Hoskinson concluded by explaining the timing and binding nature of the launch dates:

So we have 11 dates here that were systematically and carefully build. I waited a long time to get to this point because we wanted to have a high degree of confidence. Obviously bad things can happen […] that could potentially delay something. But these are high confidence dates that means more likely than not they going to happen […]

Technically we can do the hard fork five minutes after that ship if we really wanted to. But we have to remember, this is a living ecosystem, there are exchanges, third party wallets like Yoroi, explorer infrastructure […] One of the most important things when you do a rollout and go from a static to a federated system to a dynamic and decentralized system is to give your partners time to integrate properly.