Cardano’s price continues its bull-run and has managed to get into a price range it hasn’t seen since 2018. The rally appears to be driven by the rollout of Cardano’s smart contract capabilities, an increase in ADA trading volume, and a disclosure made by Charles Hoskinson.

In a post for the IOHK blog published yesterday, the company’s Director of Marketing and Communications, Tim Harrison, gave an update on Goguen and deployment of “Mary”. As announced yesterday, IOHK has successfully deployed the code for the Hard Fork Combinator (HFC) “Mary”on the Cardano testnet.

“Mary” is a complement to the functionalities introduced with the “Allegra” fork. These two HFCs will enable Cardano to become a multi-asset platform that users will be able to leverage to create, issue, and manage “native” network tokens and other applications. “Mary” is expected to be deployed on the mainnet by the end of February, as Harrison stated:

When Mary turns her crypto key within the network, we will unlock the mechanism for users to create their own tokens for a myriad applications: Decentralized Finance (DeFi), and countless other business use cases.

Much hype has been created by Cardano’s entry into the DeFi realm. There, Ethereum occupies the undisputed No. 1 position. However, the DeFi king is currently facing severe challenges: a network congestion and high transaction fees.

Cardano could be a better alternative. In addition to offering greater scalability and lower fees, the platform will be interoperable and will have tools that will allow developers to easily migrate their projects to Cardano, with the ERC-20 converter. Thus, Cardano could take a slice of a market with a Total Value Locked (TVL) of $34 billion. Investors in the DeFi space know that many times, the biggest winners are the first to move to a new platform or protocol. 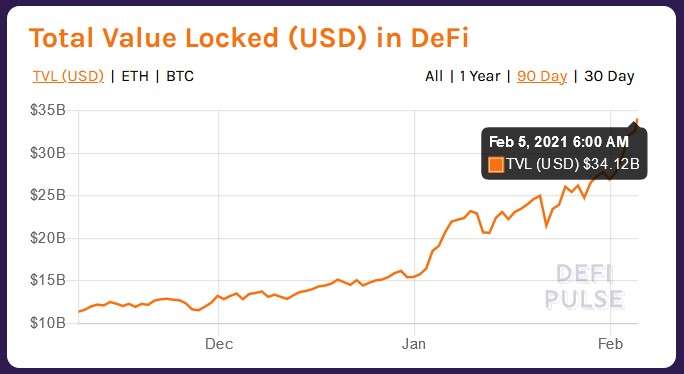 Cardano will upgrade to Omega Ouroboros

Another reason for yesterday’s price rally could be Charles Hoskinson announcement that IOHK is working on a consensus algorithm called Ouroboros Omega. Conceived to be a project where “all the ideas” that IOHK has had over the past 6 years converge, as Hoskinson said, the revelation was enthusiastically received by investors and the Cardano community. Therefore, it may have served as a catalyst for ADA’s price.

If you think that we are rocking it now, just you wait until we talk about Ouroboros Omega…..