With the continued upward trend for Bitcoin, the long-term outlook for Bitcoin looks bullish again. At the time of writing, Bitcoin was trading at USD 9,411 and recorded a plus of 2.8% over the past 24 hours and a weekly plus of around 15%.

Due to the rally on Friday, during which the Bitcoin price temporarily climbed to over 10,500 USD, BTC has also exceeded the 200-day moving average (MA) again. This is often seen as an indicator of a long-term optimistic outlook, which means a change in sentiment. It is also noteworthy that the “Death Cross” was averted on the daily chart. As CNF reported, it took a sudden and strong rise to fend off the death cross (the crossing of the blue and red lines in the chart). 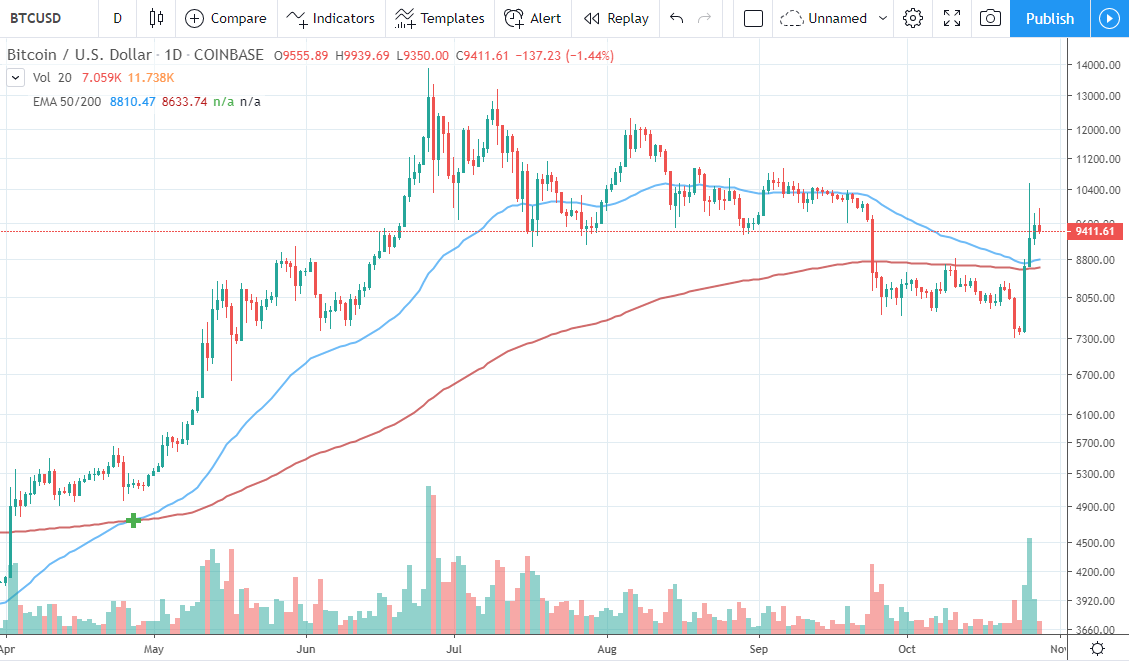 Another bullish signal is currently also the trading volume, which on Saturday, October 26, rose to the highest level since June 27, 2019. This is exactly the day on which Bitcoin reached its annual high of around USD 14,000.

China coins: NEO, ONT and Tron on the rise

In addition to Bitcoin, cryptocurrencies originating from China have been in the spotlight since yesterday. With NEO (+20%), Ontology (+41%), Tron (+23%), IOST (+26%) and Bytom (+99%), crypto projects that have their headquarters or offices in China or the region have the largest profits.

The cause is clearly to be seen in the news from China. According to CNF reports, China’s leaders have called for the adoption of the blockchain “as an important breakthrough for independent innovation of core technologies” at a meeting of the Political Bureau of the Central Committee of the Communist Party of China and adopted a ” Crypto Law” effective January 1, 2020. China wants to promote the benefits of blockchain technology in a number of industries, especially in finance, education and health care.

Many analysts have made a direct connection between the news from China and the rise in crypto prices and called it the “Xi-Pump”. Accordingly, it is not surprising that China-based projects are booming.

Dovey Wan, co-founder of PrimitivCrypto noticed that the search for terms the blockchain and Bitcoin in China literally exploded overnight, after the announcement of President Xi.

Many ppl asked "How's the ACTUAL reaction on the ground to the Xi Blockchain shill in China" Here I did a quick data crunching on Wechat and Baidu search index, found it pretty interesting

However, some analysts are critical towards the rally of the China coins. As Alex Krüger noted, it is very unlikely, for example, that a large Chinese company such as Alibaba would use Tron or Ontology. The reason for this is quite catchy. Within the framework of its policy, China is anxious to gain control and not to decentralize.

Can you imagine Alibaba using TRON and Ontology?

Now lay off the LSD.

Josh Rager was also rather critical and spoke of FOMO (“Fear of missing out”), which is quite understandable. NEO’s trade volume has risen rapidly to one billion US dollars in the past 24 hours.

$NEO volume up over 1 Billion in the past 24 hours

The Chinese altcoin fomo is real

(Personally I'm focused on stacking Bitcoin & will only use these pumps to add to Bitcoin, not looking to hold majority of alts long term – hopefully you learned this lesson)

NEO is the largest cryptocurrency from China by market capitalization. The project has long been said to have a connection to the Chinese government, although this is only a rumour. Nevertheless, the news from China has given NEO a particular boost.

On Friday the founders of NEO, Da Hongfei and Erik Zhang, made an interesting reference to the Chinese “Digital Yuan” in a Reddit “Ask Me Anything” (AMA). Both dispelled fears of the digital currency and did little to dispel rumors of possible cooperation.

NEO is not a currency. It is a platform. I don’t think that NEO will have a conflict with the digital currency issued by the Chinese Central Bank or other countries. From another perspective, the new cross-chain technology developed by NEO can facilitate the spread of different digital currencies on NEO.