In a new report from Bloomberg Intelligence, analyst Mike McGlone remains optimistic about Bitcoin’s (BTC) price performance. McGlone is one of the analysts who predicted a rise in BTC price that will bring it back to an all-time high. Currently, the analyst at Bloomberg outlines the main reasons behind an upcoming bullrun.

After breaking the $11,000 barrier for the first time in 2020, during the past week, Bitcoin has remained in that price range in recent days. At the time of writing, Bitcoin is trading at $11,760 with a slight gain of 0.87% in the last 24 hours. On the weekly and monthly charts, BTC remains green with gains of 6.04% and 27.38% respectively. The market capitalization has risen to $216 billion.

In Bloomberg’s report, McGlone acknowledges that the rising Bitcoin price is driven by the growing adoption of the cryptocurrency. In addition, McGlone states that Bitcoin is a better investment against the inflationary policy that the Federal Reserve is applying with the aim of mitigating the Covid-19 pandemic. McGlone says:

Increasing adoption and vehicles for exposure, and custody, are accelerating Bitcoin into the mainstream of investments. In a world of zero and negative interest rates and diminishing equity-price returns due to quantitative easing, the quasi-currency stores of value – gold and Bitcoin – are finding increasing investor interest..

Bitcoin $10,000 Breach Set to Dust Nasdaq – Fundamentally bullish and breaking above key $10,000 resistance, Bitcoin has a solid foundation on the back of a steep correction and period of disdain, in our view

In that sense, Bloomberg’s analyst believes that Bitcoin’s position as digital gold is getting stronger. McGlone argues that the drop in volatility of the cryptocurrency indicates an “enduring relationship” with gold’s performance. The analyst claims, as shown in the chart below, that BTC’s volatility is at its lowest level of the year and at levels similar to 2017. The analyst says: 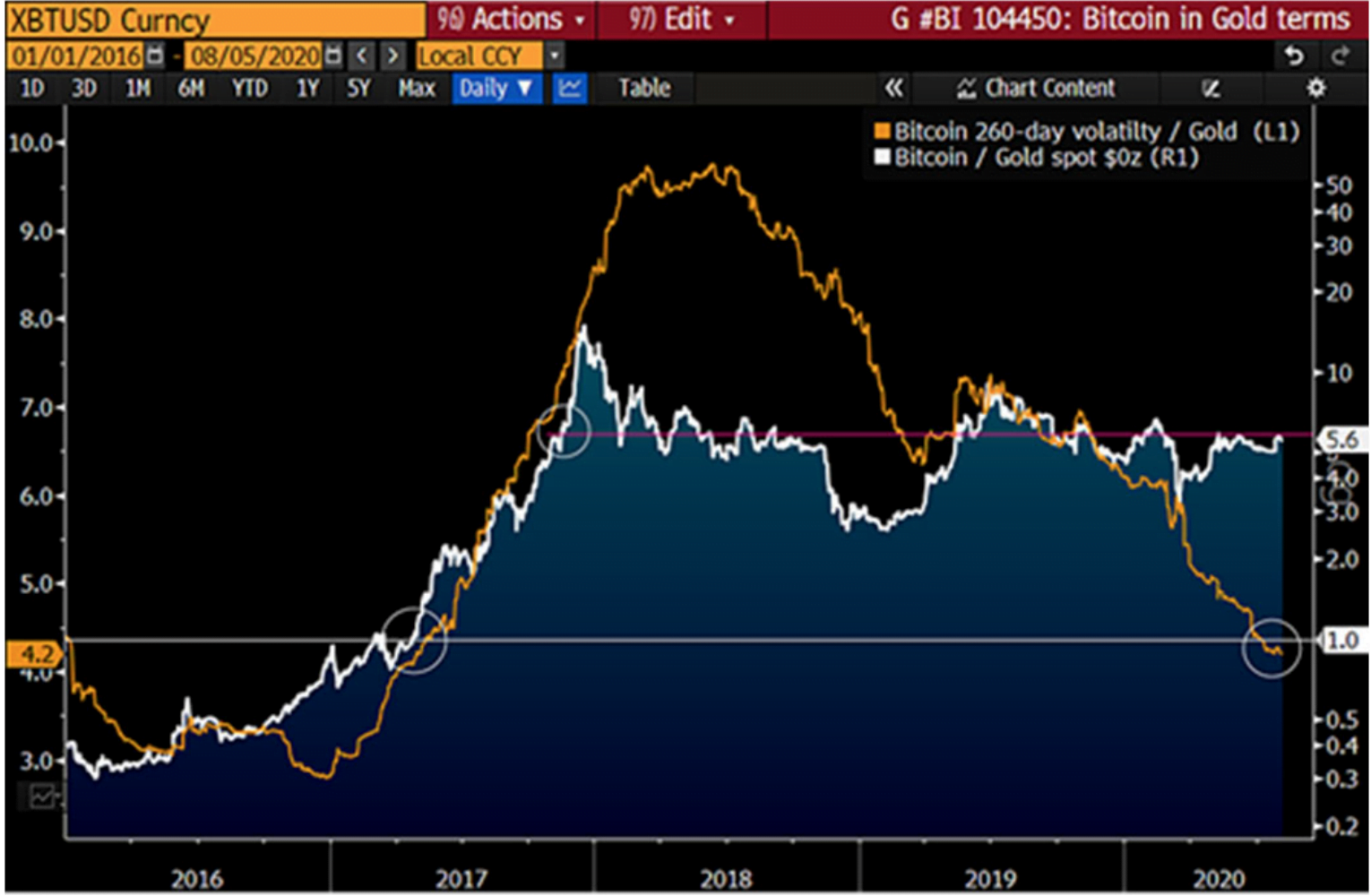 Conversely, McGlone believes that Ethereum has had a speculative-driven price hike, due to increased demand and favorable conditions in Bitcoin. The analyst adds that Ethereum faces competition from “similar platforms” and more than 6,000 currencies. This trend could continue in the short term, keeping the rally for ETH, XRP and the rest of the altcoins. However, according to the report Bitcoin will be the biggest winner in the long term:

It’s the unlimited supply of the broad crypto market vs. the relative scarcity of Bitcoin that will maintain buoyancy in the benchmark asset, in our view. About 90% of the 21 million available Bitcoins have been produced, leaving demand and adoption as the primary price-outlook gauges. Our indicators point positive for Bitcoin, while the basic rules of supply and demand leave little hope of broad-market price advancement.