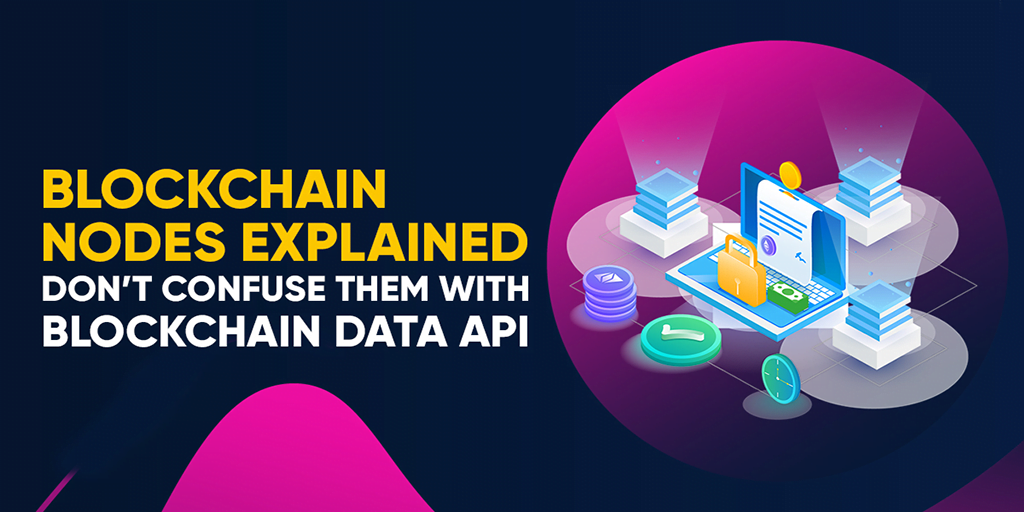 Blockchain is a relatively new technology which still confuses many people’s minds. And this is in no way out of the ordinary, because even though almost every person on the planet has heard of Blockchain, it has so many caveats, it’s almost impossible to know every term in the Blockchain dictionary because there are so many technologies intertwined. Also, just like all tech, it moves fast, and it gets updated every day, so unless you’re following the Blockchain-related news around the clock, there’s no shame in feeling a little left behind.

To tackle this problem, we’ve created this detailed article to help keep you up to date with one of the key elements of Blockchain, and that is the Nodes. Blockchain Nodes are just one part of the whole Blockchain system, and many people still confuse them with other related terms such as Blockchain Data API. In this article, we’ll help you steer clear of miscommunicating at least a part of the items in the Blockchain dictionary and give you a solid foundation on which to build your knowledge further, in the future.

Even though this sounds a bit techy and hard to understand, once you grasp your mind around the concept it’s much easier to translate into knowledge. There’s another way to think of Blockchain nodes. Blockchain nodes are simply a security check in the process, and they serve to confirm the legality of the different batches of network transactions, which are also known as blocks.

Nodes serve to validate these so-called blocks of transactional information in the distributed ledger.

What Functions Do Nodes Perform?

Miners are the ones who add new blocks of transactional information to the ledger, and the Blockchain nodes are the ones who verify the legitimacy of the newly added block by the miners. A node can either accept or reject the transaction, but when it does accept it, it stores it on top of the already existing blocks, like storing it on a shelf. A quick overview of the functions of the nodes would be:

How Secure are Nodes?

We have to be able to discern online from offline nodes. Online nodes are the nodes which are given the role to update the system with newly added information all the time. This node is always online so it can send consistent updates across the system 24/7. Furthermore, this means that the system is kept up to date, at all times without question.

Offline nodes on the other hand only need to update themselves at any time to re-join the Blockchain network. When they re-join, they download a copy of the update and store it. Once this process is done, they are fully up-to-date, and they can continue operating as normal. This process is known as synchronizing with the network.

The other important question in terms of the security of the nodes is whether a single node can run the whole system by itself. In theory yes, it can, but when a single node operates a complete system by itself it’s opened up by different vulnerabilities which can take advantage of the system or decrease its functionality. Put simply, the more nodes a system has, the more secure it is. A single node can be disrupted by a power outage, hackers with malicious intentions, and other disasters.

However, one single node is completely capable of bringing the system back to normal by restoring the data it has backed up. This makes the Blockchain and nodes extremely safe, much more than traditional methods.

What Is the Difference Between a Node and a Miner?

While we’re talking about the differences between the different areas of the Blockchain network and the distributed ledger it’s also important to clarify what a miner is, so we don’t accidentally confuse the terminology further. A miner generates blocks by choosing legitimate transactions, however, the miner must operate a complete block, because it doesn’t have access to the whole history of the transactional information in the network, so it doesn’t know which transactions in the network are legitimate and which are not.

What Is a Masternode And What Is Its Place In The Network?

Apart from nodes and miners, there’s also a node called Masternode. A master node differs from the other nodes on the network by being more powerful in terms of technical specifications. For example, a Masternode has more RAM than an ordinary node, therefore it can run more operations compared to ordinary nodes.

Overall, this is what a node represents and the function it can do on the network. As you can see a node is in no way similar to a Blockchain Data API, and the two terms must not be confused. A Data API is something completely different, yet many people manage to mix them up, but this is normal because Blockchain is such a huge field.