There are many different wallet providers on the market. Hardware wallet offer the best possible protection for Bitcoin and your cryptocurrencies. BlochsTech’s Money Card combines the security of the smart card industry with the interoperability of blockchain technology.

BlochsTech is a small startup from Denmark run by Martin Clemens Bloch. This is where the name of the company comes from. Bloch developed the BOBC product for the connection to the classical financial system in his spare time. The Bitcoin Smart Card is designed to appeal primarily to users who do not have a deep technical understanding but wish to take advantage of Bitcoin and the Bitcoin Blockchain.

Blochstech Bitcoin smart card price and use in practice

The card costs 19,95€ on the official website of the manufacturer. If you click on this link, you will be taken to the website. The BlochsTech Open Bitcoin Card is an NFC smart card that can be used as a Bitcoin wallet.

According to the manufacturer, the product is intended for those who are technically proficient themselves but cannot find a simple way to introduce family and friends.

When using the card, the owner only needs to know his Bitcoin wallet address and the PIN code of the card. Both will be sent by mail after successful order. 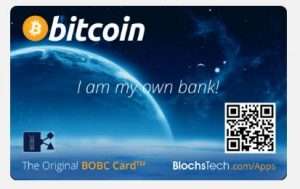 The Private Keys are stored on the card and are always offline. The card user does not need to use a PC or smartphone and no other software needs to be installed. To be able to pay with Bitcoin, Bitcoin units must first be sent to the address of the card. This can be done either by another wallet or by any stock exchange. If you want to buy Bitcoin first, take a closer look at our Bitcoin purchasing guide.

Do all merchants accept the Bitcoin Smart Card?

All merchants can download the open source software and then receive and accept Bitcoins as a means of payment. At present, however, the distribution of dealers is not particularly large. The project is still in its infancy and is therefore looking for investors to reach a larger critical mass. The card does not charge any fees for the processing of transactions. However, the company plans to charge all new cards with a fee of 1.8 percent.

Is the Bitcoin Smart Card secure?

The protocol is open source and can be viewed and downloaded on the official website. Theoretically everybody can develop his own map or his own terminal from it. The Bitcoin card terminal app is also open source and can be freely copied and sold. However, the specific implementation of the Blochs Tech card along with the app icons and smart card is copyrighted.

The BlochsTech Bitcoin Smart Card is an interesting project, but it is still in the early stages of development. However, the programmer himself writes on his page that only small amounts of bitcoins should be stored on the BOBC card.

What is your opinion about the BlochsTech Bitcoin card? Write it down in our comments!

If you don’t think the Bitcoin Smart Card is right for you and you’re looking for more protection, take a closer look at our hardware wallet review page. We have tested and evaluated the following models for you: