BitMEX CEO Arthur Hayes has made a bullish prediction for Ethereum. Just before ETH broke the $400 resistance Hayes said that the cryptocurrency will reach $500 “soon”. Hayes made this prediction in early August when the uptrend of the market was just beginning.

Since then Ethereum has reached its all-time high price in two years. At the time of publication, ETH stands at $437 with gains of 3.23% in the last 24 hours. The profits of the cryptocurrency in the weekly (15.29%) and monthly (83.14%) charts make Ether (ETH) one of the biggest winners on the market.

Hayes’ prediction is related to his entry into Ethereum’s DeFi sector. As he revealed in several tweets, Hayes is “a farmer now”. BitMEX CEO shared an image of his earnings on the YAM token after staking Compound protocol’s COMP.

The growth in the DeFi sector is one of the main drivers of the strong increase in the price of ETH. In less than two months, the sector has grown to an all-time high of 5.82 billion dollars according to DeFi Pulse data. As can be seen from the chart below, the total value of the Ethereum DeFi sector was just about $4.6 billion on 13 August. In other words, in less than two days, investments into the sector grew by nearly $1 billion, reflecting the ongoing DeFi madness. 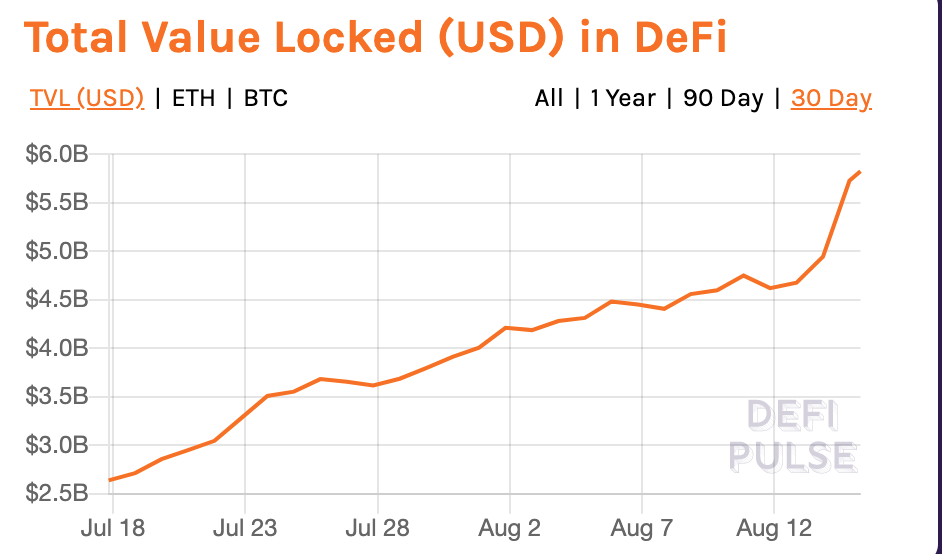 If this trend continues, ETH price will probably keep rising as demand increases. Therefore, Hayes’ prediction could come true but could also fall short. Data of the analysis firm Santiment shows a reduction in the number of active Ethereum addresses. Furthermore, due to the high activity in the DeFi sector, transaction fees on Ethereum’s network have skyrocket. Santiment stated the following:

Just a day after making a two-month low in address activity and fears of soaring fees, $ETH has defied the short-term fundamental concerns and soared to a 2-year high of $430! #Ethereum traders are rejoicing on sky-high social volume levels as well. 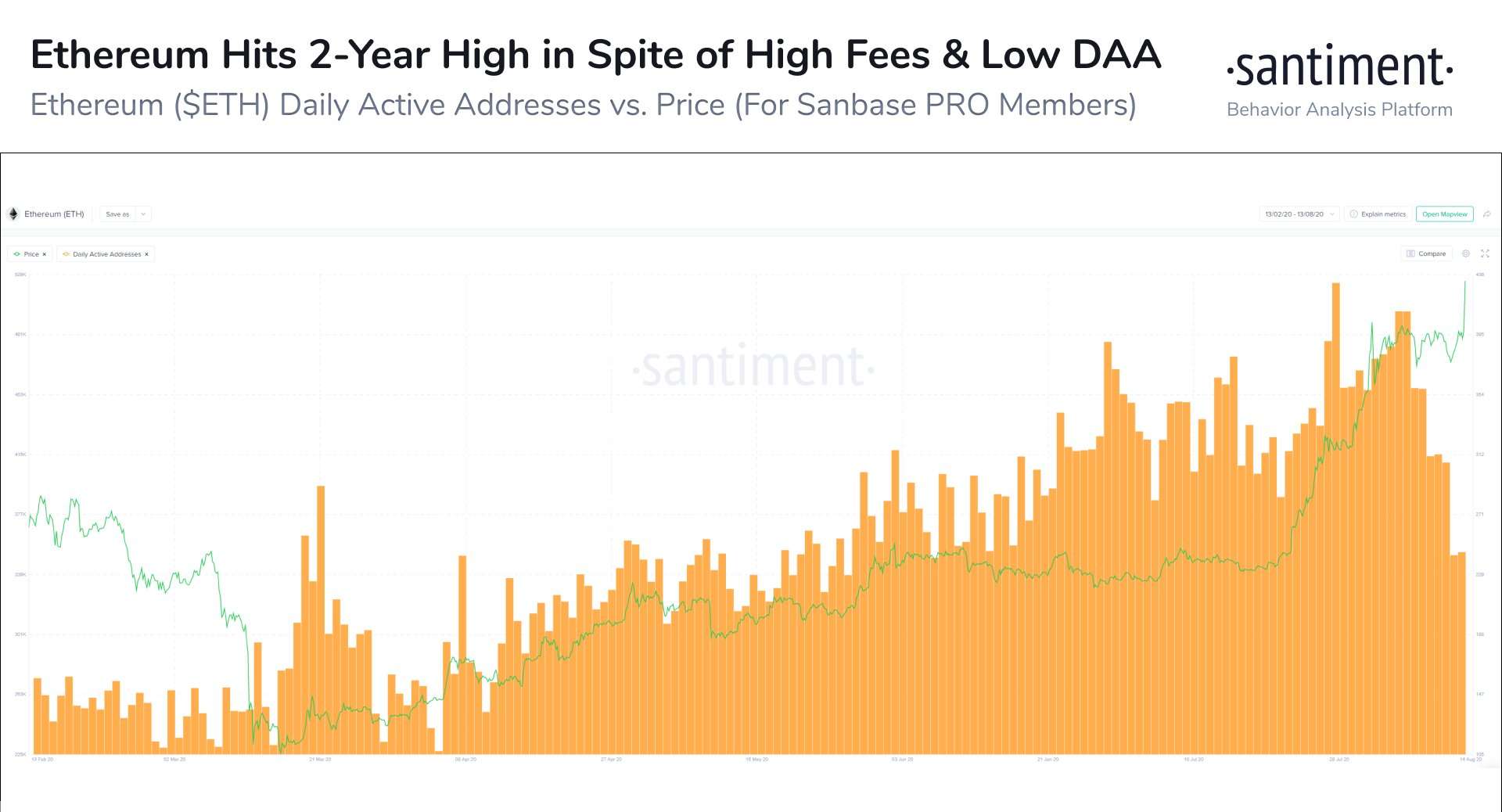 In that sense, Santiment points out that Ethereum’s transaction fees are not related to its price. Transaction fees peaked on Aug. 12 and since then ETH has risen 13%. Santiment concludes that although users prefer low fees, this is not a determining factor to users who want to invest in an asset which they believe will make a profit. At least, Santiment says, this is true in the short term. 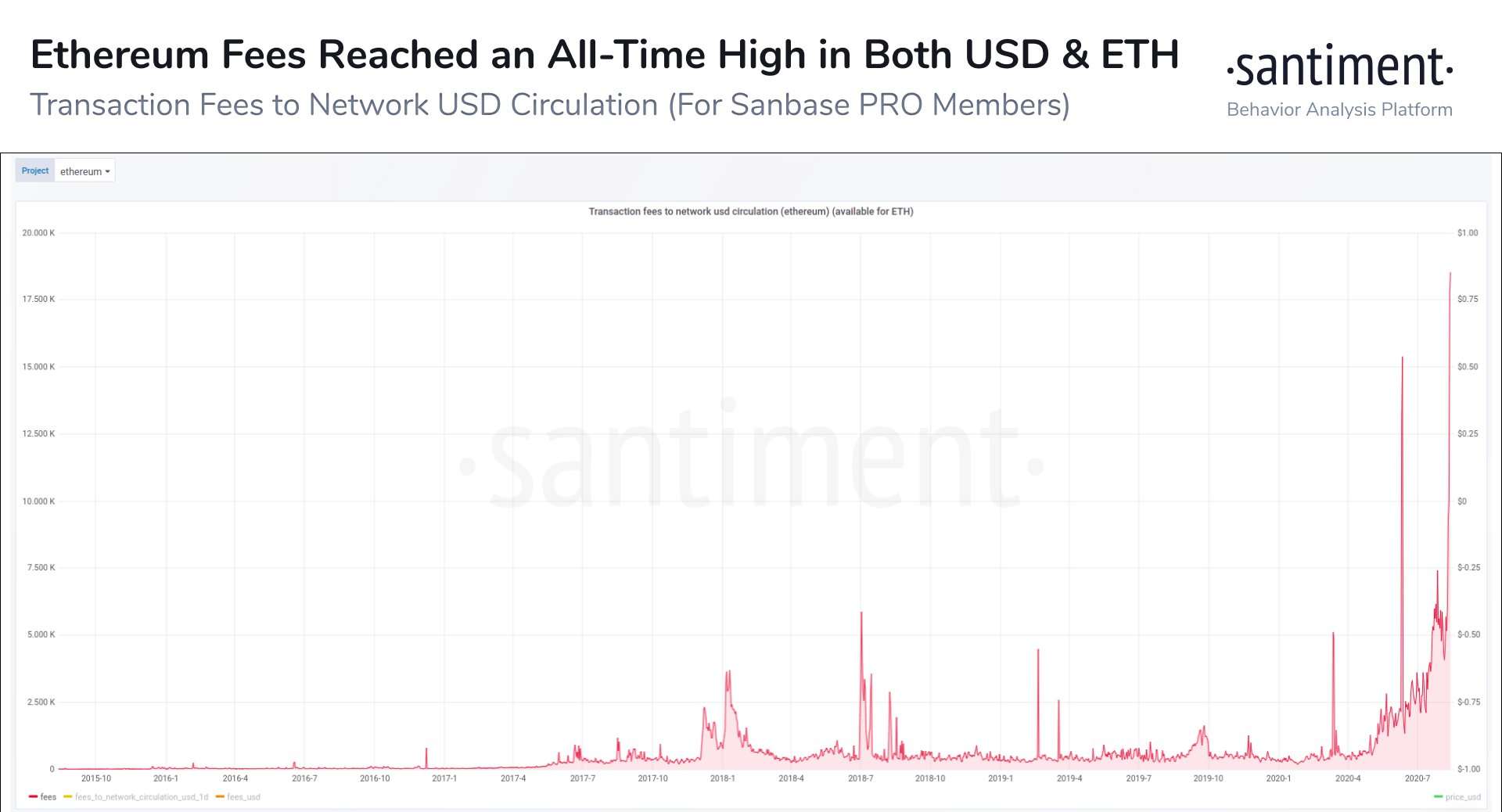 So the outlook for Ethereum seems to remain on the side of the bulls. Analyst Satoshi Flipper explained that there is no major resistance to the ETH price until about 780 dollars.

No hard resistance until $780. This run has literally just started 🚀 pic.twitter.com/alMvDrxMAK

Although the DeFi sector seems to be the main driver of Ethereum’s rally, some analysts and Ethereum core developers have advised caution to new investors. The notorious Bitcoin whale “Joe007” has been one of the most critical and has made a bearish prediction for the sector.

Joe007 shared a publication by the founder of the Synthetix protocol, Kain Warwick. The founder of the DeFi protocol warned that the industry is still in its infancy and said that many protocols will follow the “ICO path” as the DeFi has all kinds of risks like hacks, bugs, scams, centralization and manipulation. The Bitcoin whale thinks that there will be ICO-like losses in the future.

Great take. I also happen to think that the bulk of ICO-like #DeFi losses is still ahead of us. Full speed ahead! https://t.co/JxhoRExqc2