After a few turbulent days for the cryptomarket, Bitcoin has surpassed the $7000 thousand barrier. The King of cryptocurrencies is facing decisive months. First, the next few days could define the path of the cryptomarket for months.

On the other hand, next year the Bitcoin Halving will take place. This will be another important event for which the cryptocommunity has great expectations.

In this scenario, the platform BitMex has made a publication about a study that was made about the software development of Bitcoin Core. The research was carried out with the software models available from 2012 to the present.

The BitMex research team began by testing the performance of Bitcoin Core with an Initial block download. They performed 35 successful tests and recorded the time required by the nodes to perform optimal synchronization with the network.

The first conclusion of the research team is that Bitcoin Core shows important and constant improvements in its performance. In spite of this, they also deduced that previous versions of the software had a great difficulty to overcome the volumes of transactions that the network had during the period from 2015 to 2016. Even with the latest hardware. These results led them to their second conclusion, perhaps one of the most important in the investigation:

Therefore we conclude that without the software enhancements, an initial synchronization today could be almost impossible.

The graph illustrating the BitMex results can be seen below. There, they show the results of the 35 IBDs they made and the time it took them to download them. The data also shows the speed improvement achieved with the release of Bitcoin Core 0.12.0. 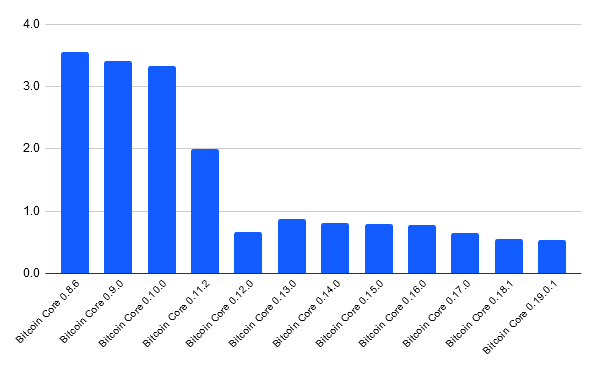 On the other hand, BitMex researchers were also able to determine that during updates from Bitcoin Core 0.8.6 to Bitcoin Core 0.14.0 the best in network scalability were less than the size of Bitcoin’s blockchain.

The graph below shows how long it took the team to synchronize a client, “up to block height on the software release date”. 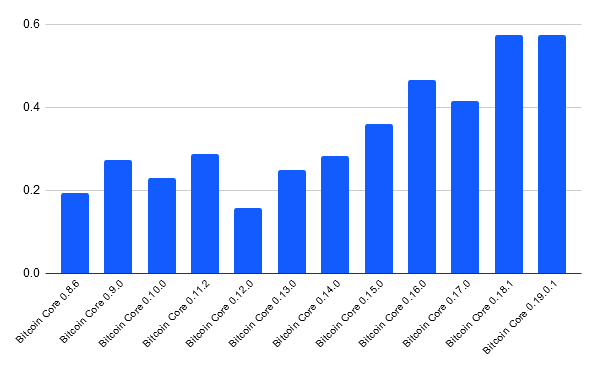 Finally, it seems necessary to emphasize that the team of researchers stated that the expansion of the Bitcoin blockchain and the technology available to increase its efficiency and scalability, will not grow proportionally. They predict an increase in the time of the IBDs.

the data illustrates the significant scalability enhancements which have been delivered over the last seven years (…). The large reductions in IBD times and the inability of old nodes to fully synchronize indicates that if it were not for these scalability enhancements, by now Bitcoin would be essentially dead, even if users had the highest specification hardware available. The data also shows that technological innovation is unlikely to keep up with the growing blockchain going forward and that IBD times will increase.

The price of Bitcoin is, at the time of writing the article, at $ 7.358 and shown lost at about 5.11% in the last 24 hours. An indicator that the bearish trend may still be lurking in the cryptomarket.