After Bitcoin marked a new all-time high of $48,200 yesterday, the price is now back in a consolidation phase and could be vulnerable to whale activity. As the on-chain data shows, the Bitcoin price is currently dominated by large investors.

Data from “Material Scientist” shows a significant increase in bitcoin whale trading activity after the Elon Musk pump. The analysts stated that the biggest sellers of Bitcoin were “exhausted” when the cryptocurrency was hovering between $33,000 and $40,000. Since the end of January, there have been massive buy orders of $100,000 to $1,000,000, buying back a large amount of BTC when BTC was at the bottom of its trading range.

“Material Scientist” noted that whales have been steadily accumulating. In the last 24 hours alone, trading activity from large investors was estimated at $150 million. The analysts showed the whale activity in the chart below and explained:

Whales are still driving this whole thing and are up big-time! Why is blue up so much, you might ask. Bc of whales having an unusually large abs net vol ($150M in last 24h)! Usually, they only make up a tiny fraction of the tot CVD, but now they’re the majority. So, this move to $50k was almost exclusively whale-driven! 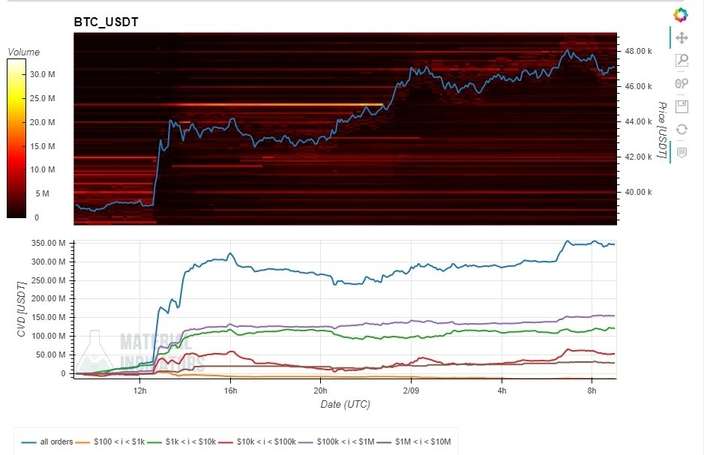 This increase in whale activity has increased in direct relation to the Bitcoin purchase announced by Tesla. In support of this thesis, analyst “Checkmate” has pointed to a strong increase in whales with more than 100 and less than 1000 BTC in their wallets.

In opposition, addresses with more than 10,000 BTC record a decline. The analyst attributes this drop to the outflow of Bitcoin from major exchanges. As the image below shows, the Bitcoin holdings of these platforms are at the lowest levels in almost a year.

Data from Bloqport indicates that BTC withdrawals have reached an all-time high not recorded since 2018. The research aggregator believes that “this is an incredibly bullish sign during a bull run”.

“Old Bitcoins” on the move

The analyst concludes that there is such a high demand in the market that it exceeds the supply of BTC entering in circulation. The selling pressure being recorded is mostly exerted by miners and long-time Bitcoin investors.

The latter stopped selling their funds when the price of the benchmark cryptocurrency reached $29,000. However, they have become active again after Tesla announced its purchase of BTC. Pausing over the Days of Coin Destroyed indicator for the last month, Checkmate stated the following:

We are at an elevated level, coincident with the 2013 Bull peaks but well within 2017 range It is resetting, likely result of consolidation, and it is likely we will see this spike up when OG’s recommence taking profits.