The world’s largest cryptocurrency Bitcoin has been moving sideways over the last few weeks with a not-so-exciting end to 2021. As of press time, Bitcoin still continues to trade under $47,000 levels with its market dominance dropping under 40%.

Although the Bitcoin price action is not quite supportive, its on-chain metrics continue to show strength. One of the major indicators is the Bitcoin illiquid supply which has accelerated recently. As per on-chain data provider Glassnode, nearly 76% of Bitcoin in circulation is illiquid at this point. This clearly indicates heavy signs of accumulation during the recent BTC price dips. In one of its latest reports, Glassnode mentions:

We can see that over the final months of 2021, even as prices corrected, there has been an acceleration of coins from Liquid, into Illiquid wallets. Through December, coins moved to increasingly illiquid wallets at a rate of between 50k and 100k BTC/month reflecting a higher likelihood of broader accumulation. 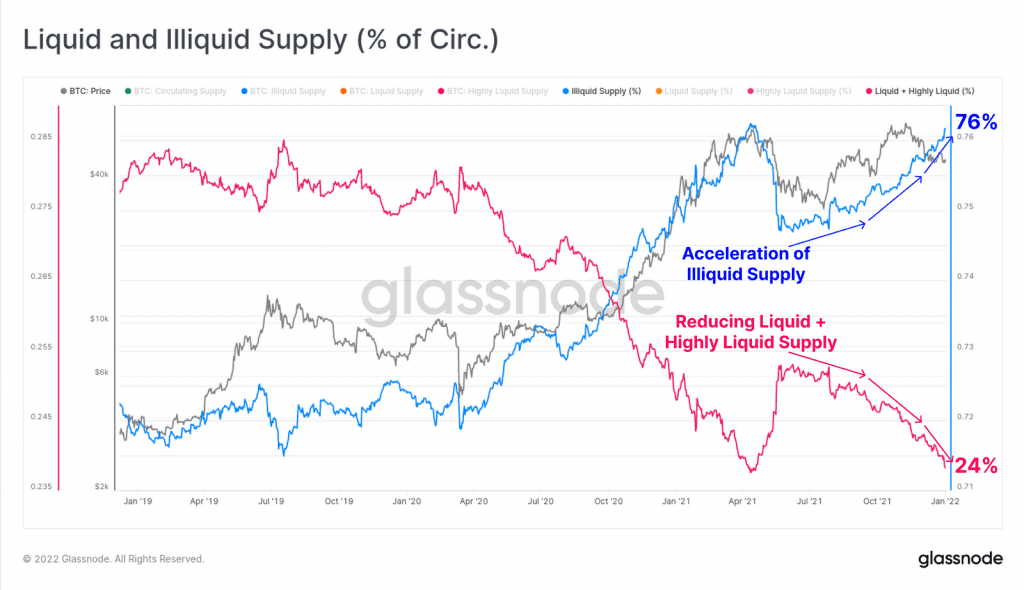 This is clearly an encouraging sign that Bitcoin investors are willing to buy and HODL even during these testing times.

Bitcoin Non-Zero Addresses on the Rise

Another important metric is the number of Bitcoin wallet addresses with a non-zero balance which is on the rise. This metric helps us in assessing the long-term demand for cryptocurrency. Glassnode explains:

Currently, the Bitcoin non-zero addresses have reached an all-time high of 39.6 million, which is 40% higher than the peak of the 2017 bull run.This shows that the user-base growth has been sustained over the five-year period. 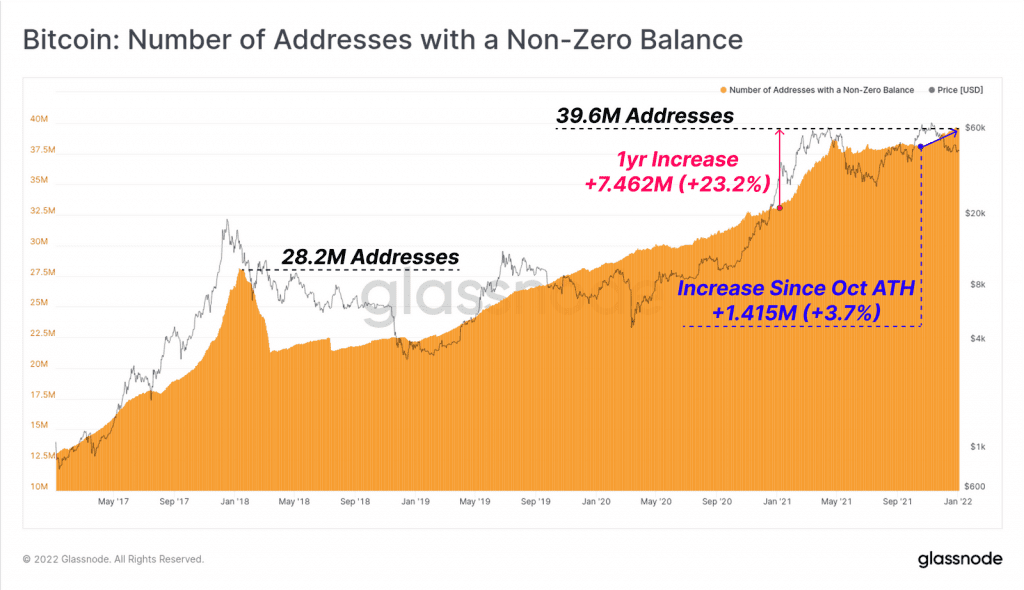 In one of their recent reports, Wall Street banking giant Goldman Sachs stated that Bitcoin still holds the absolute potential of touching $100,000 levels. It adds that Bitcoin will take away the market share from gold amid rising adoption. As reported by Bloomberg:

Goldman estimates that Bitcoin’s float-adjusted market capitalization is just under $700 billion. That accounts for 20% share of the “store of value” market which it said is comprised of Bitcoin and gold. The value of gold that’s available for investment is estimated at $2.6 trillion.

Thus, if Bitcoin’s share as a store of value was to “hypothetically” rise over 50%, its price will increase to $100,000 with compounded annualized returns of 17-18%. Furthermore, based on the technical indicators, Bloomberg notes that bitcoin’s low-volatility price correction could be nearing an end. It notes:

Bitcoin has been languishing in a range of about $45,000 to $51,000 for a month or so now, but it may be about to rally again. The cryptocurrency’s 30-day historical volatility is at the lowest since September, and the price is showing short-term exhaustion signals.

The so-called Demark Sequential indicator is flashing a “9-13-9” pattern just above the $43,295 to $44,500 support zone, which is defined by the 61.8%. Fibonacci retracement of Bitcoin’s entire June-to-November rally and prior Demark support.