Back in the mid-$30,000 range, Bitcoin continues to consolidate in an area that has remained a strong support. Unlike the traditional market, concentrated in retail influence, in the crypto market the price action has been dominated by large investors.

Data from the firm Santiment indicates that the number of Bitcoin whales with more than 1,000 BTC in their addresses has “briefly” surpassed the number held by mid-size investors holding between 10 and 1,000 BTC. Therefore, Santiment claims that the direction in the price of BTC has been dictated by the whales and predicts that this trend will continue.

The firm rules out that this will have a negative impact on Bitcoin, but believes that the metric will become more prevalent in the future. Additional data from Santiment adds that whales are absorbing funds from mid-sized investor addresses. These investors go from medium to low size (<10 BTC) after selling their funds.

Investors with funds between 10 and 1,000 BTC seem to be more inclined to take profits in the current price range, increasing selling pressure and holding Bitcoin in the $30,000 range.

Remarkably, the rise in the number of BTC whales has been occurring in recent months. However, as BitcoinTreasuries shows, the majority of institutions joining the Bitcoin network, might have a more long-term investment view. In this regard, MicroStrategy remains the number 1 firm. The company announced a $10 million purchase of 295 BTC just a few hours ago, suggesting they took advantage of the drop in BTC price to “buy the dip.”

An indicator that suggests that whales are holding bitcoin in the long run is also the total volume of Bitcoin on exchanges. Glassnode reports that this metric is at a 3-year low. 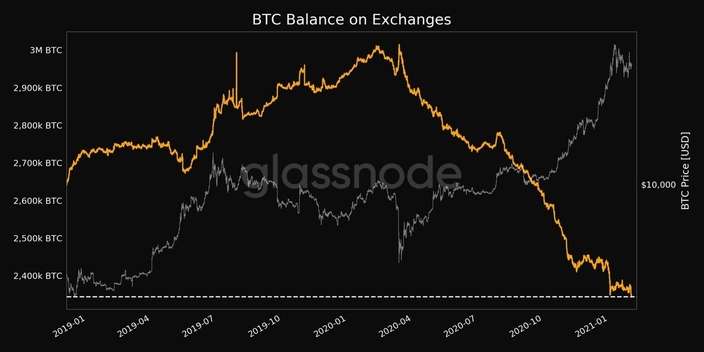 From the above and the increase in whale participation, analysts predict a Bitcoin supply shock that could be beneficial to its price. A rising price could lead to more investors and institutions rushing into BTC, worried about missing out. Despite the upsurge in media coverage, still very few people in the world hold Bitcoin.

Analyst Willy Woo determined that the Bitcoin network has the same number of users as the internet did in 1997. Unlike the information network, the “monetary network,” as the Bitcoin network has been called, is growing faster. By 2025, BTC could have one billion users and a price estimated between $400,000 to $1 million. Woo’s findings are especially important for potential investors wondering if it’s too late to buy Bitcoin. Woo stated:

In terms of adoption, Bitcoin has roughly the same users as the Internet had in 1997. But Bitcoin’s growing faster. Next 4 years on current path will bring Bitcoin users to 1b people, that’s the equivalent of 2005 for the Internet. 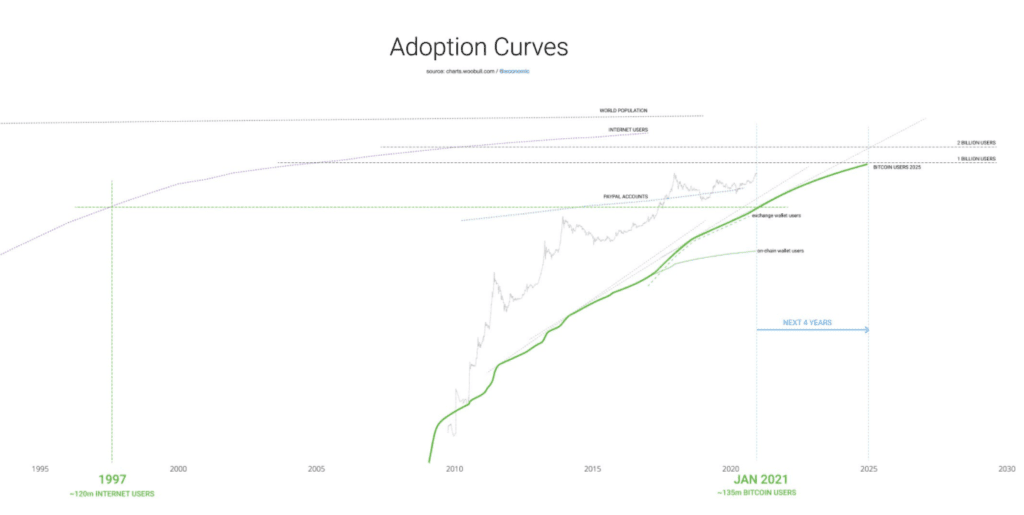 The two factors mentioned above: supply reduction and adoption could continue to drive the Bitcoin price into uncharted territory. However, at least in the short term, retail investors appear to be on the sidelines while Bitcoin whales dictate what will happen on a larger scale.