Digital magazine Reason has started publishing a four-part documentary series on the origin of the cypherpunks. In the crypto community, the first part, which was published a few hours ago, has sparked a debate about the origins of Bitcoin and the interest of its creator, Satoshi Nakamoto, in the cypherpunk movement.

Bitcoiner Paul Sztorc initiated the discussion by responding to one of the tweets from Reason’s executive editor, Jim Epstein. In a thread, the editor of the magazine shared information about some interviewees for the documentary, including Blockstream’s co-founder and CEO, Adam Back. Sztorc said he has evidence that shows that Nakamoto was never a cypherpunk or was not interested in this movement until the publication of Bitcoin’s whitepaper. Sztorc indicated as part of the alleged evidence the fact that Nakamoto did not know Wei Dai:

Dai is a cypherpunk who has made important contributions to cryptography, including the creation of the B-money system. At one point, he was even credited with creating Bitcoin, but Dai himself said that his relationship with Nakamoto and the Bitcoin project was “limited”.

Sztorc’s main argument is that Nakamoto only mentioned Dai’s name after the publication of Bitcoin’s whitepaper as one of the influences on Bitcoin, since he only learned of the existence of Dai’s invention later, as can be seen in the picture below. An active member of the Cypherpunk community would have been familiar with Dai’s work long before that. 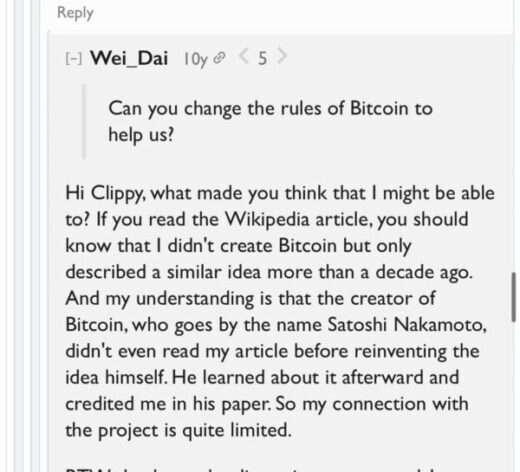 Satoshi Nakamoto and his precautions

Another of the points that Sztorc established for his argument is the use of the Microsoft operating system by Nakamoto, as mentioned in the above quotation. However, Adam Back responded to the tweet and said that this may have been an intentional move by Satoshi to avoid arousing suspicion. Back’s strongest argument is that the measures Satoshi took to prevent his anonymity have worked, so far. Furthermore, Back added:

The thing is Satoshi didn’t seem to screw up opsec at all, so we know basically nothing. There are pro and con arguments for any theory. As someone who used and operated remailers I know security conscious people think of anon sets and narrowing risk, and stylometry.

Back has also been one of those who has claimed that Nakamoto may have ignored some of Bitcoin’s background (bit-gold, b-money) up until the whitepaper. However, Back also didn’t rule out that it was all part of Nakamoto’s attempt not to “quote obscure things only known to a small group”. Blockstream’s CEO claimed that only the cypherpunks were thinking about how to use Hashcash, one of Back’s inventions, as digital cash.

Back himself is one of the most popular suspects among the crypto community to be behind Bitcoin’s inventor identity. In addition to his academic background, his writing style, and his knowledge of cryptography (he is cited as a source in Bitcoin’s whitepaper), the email correspondence between Back and Satoshi has remained hidden.

In any case, Reason will still release three more parts of its documentary series. Therefore, the discussion might continue.