The increase in the adoption of Bitcoin and other cryptocurrencies has been significant during 2020. However, countries with the world’s largest economies have lagged behind less developed ones. At least, that’s what a recent report by the research firm Chainalysis reveals.

In this sense, Chainalysis argues that its index goes beyond the measurement of market statistics, trading volumes and the number of transactions. The analysis company explains that the majority of trading activities are carried out by professionals and financial institutions that “move large sums of money” and that this has little to do with adoption:

While trading and speculation are important to the cryptocurrency economy, we wanted our index to emphasize grassroots adoption by everyday users. After all, any long term speculation on cryptocurrency is likely predicated on the idea that cryptocurrency can become a mainstream means of value transfer and, eventually, payments. Our index is meant to show which countries are leading the way toward that eventuality.

Bitcoin is a global phenomenon

Chainalysis’ report measured commercial activity related to cryptocurrencies such as Bitcoin but added other important figures such as the population of the country studied and the size of its economy. With this, Chainalysis tried to show how much of a national economy has moved from the legacy financial system to the crypto economy. 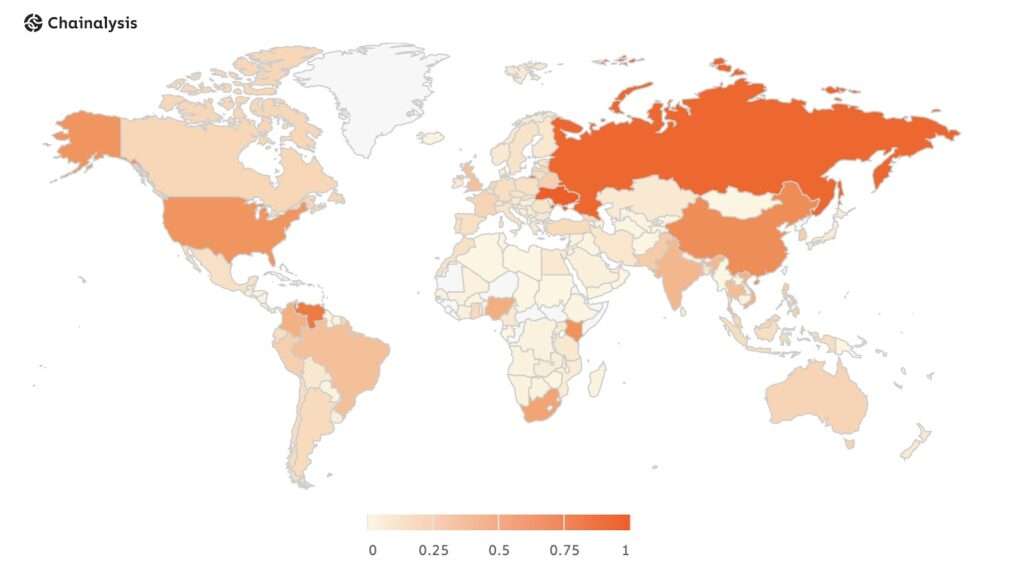 As can be seen in the image, the countries closest to 1 in the ranking have varied geographic location, population density, and economic ecosystems. In the table below, Chainalysis presents these results more clearly and it can be seen that the countries with the highest adoption have been affected by war, international sanctions, or deep economic crises. According to Chainalysis, the top 3 in his index is Ukraine, Russia, and Venezuela. 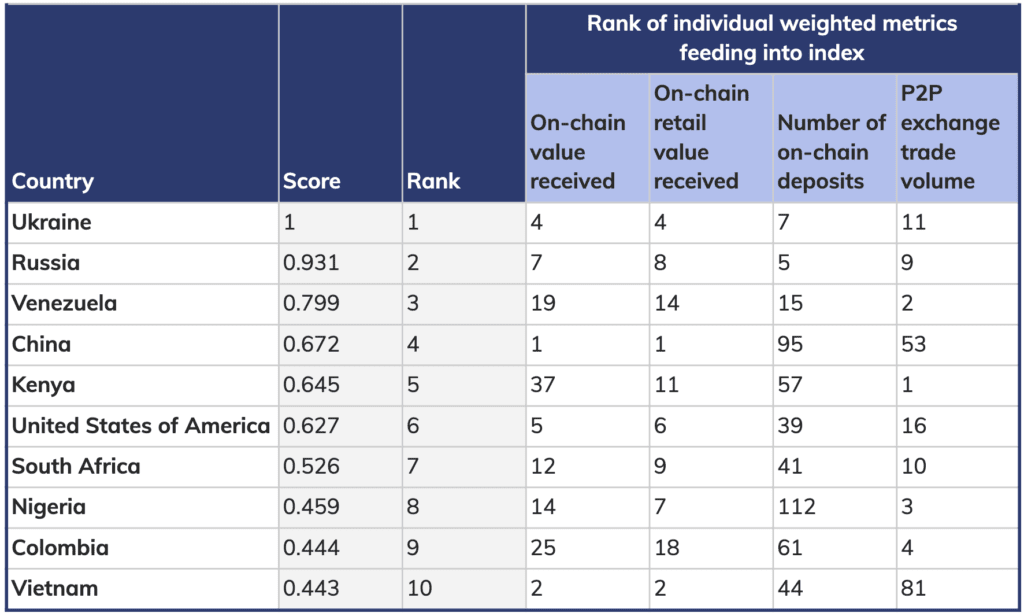 As can be also seen in the table, although China and the United States have a significant adoption, it is the countries in a crisis that logically tend to seek alternatives to their national financial system. In that sense, Chainalysis highlights the case of Venezuela as an “excellent example” for the reason that drives the adoption of Bitcoin. In contrast to Ukraine, number one in the index, Venezuela records a higher volume in terms of value received on-chain and also retail value received on-chain. Chainalysis therefore concludes the following:

As we discuss in depth later in the report, our data show that Venezuelans use cryptocurrency more when the country’s native fiat currency is losing value to inflation, suggesting that Venezuelans are resorting to crypto-currency to preserve savings they might otherwise lose. We also see this pattern in other Latin American countries, as well as in Africa, East Asia, and elsewhere.