The Vice Governor of the People’s Bank of China, Fan Yifei, spoke at the Sibos 2020 Conference about the progress of the digital Yuan. Officially called Digital Currency for Electronic Payments (DCEP), Yifei revealed that nearly 1.1 billion RMB or approximately $162 million has been processed in more than 3 million transactions with the digital Yuan.

Launched in April as the first test phase in the development of the central bank digital currency (CBDC), the Vice Governor said the digital Yuan is the most widely used asset of its kind in a commercial infrastructure. According to official numbers, 113,000 people and 8,800 companies have used digital Yuan for transactions in the Suzhou, Xiong’an and Shenzhen regions.

The transactions facilitated the implementation of 6,700 use cases, such as incentives offered by the Chinese government to healthcare workers, ease in making payments to domestic bills and transportation, among others. The Vice-Governor of the People’s Bank of China stated that the digital Yuan fulfills two functions:

To protect fiat currency from crypto assets and safeguard monetary sovereignty, it is necessary for the central banks to digitize bank notes through new technologies.

Holding Bitcoin (BTC) could be more critical than ever

Primitive Crypto’s founding partner, Dovey Wan, reported that the testing headquartes for digital Yuan have moved to Shenzhen Province. Therefore, 12.5 million people in that province will receive $1.5 million in their digital wallets. As part of the test, the funds can be used in over 3,000 shops.

Wan said that a transition to the digital Yuan will be relatively easy for Chinese society. In the country, people have adapted to using alternative means of payment to cash. Wan believes that the launch of digital Yuan will be perceived as a shift to “another app” for money management. However, she warns of implications that would give more power to the Chinese government:

Rarely people will realize the significance of how elastic the future will be when it comes to monetary expansion and subtraction. In the future, targeted stimulus policy, helicopter money, brrrrrr in a much more granular level, an easy seizure of your personal wealth (for fair causes like anti-corruption, or can be exploited for corruption itself..) can all happen with a few lines of codes.

Wan stated that with the emergence of the digital Yuan, having “your own keys” to Bitcoin will be the only way to maintain autonomy from government control. However, the development of the the digital Yuan could be having a positive impact on Bitcoin. Despite its history with cryptocurrencies, China seems to be pushing for the adoption of Bitcoin, Ethereum, and other cryptos as part of its launch strategy for digital Yuan, as a research by analyst Cole Garner stated.

7/ The Chinese government seems to want to ignite the bull market. https://t.co/SFKW7r7yFW

In that sense, Bitcoin’s fundamentals remain strong and the cryptocurrency is trading at $11,490 with a 10% gain in the last week. For now, the Chinese narrative seems to be in favor of Bitcoin. But the relationship between the crypto market and China’s communist party remains tense. As the image below shows, Bitcoin miners in that country have accumulated their rewards in anticipation of announcements by China’s president, Xi Jinping, on October 14 of this year.

For now, the Chinese government plans to deploy digital Yuan before 2022 when the Winter Olympics will take place in Beijing. 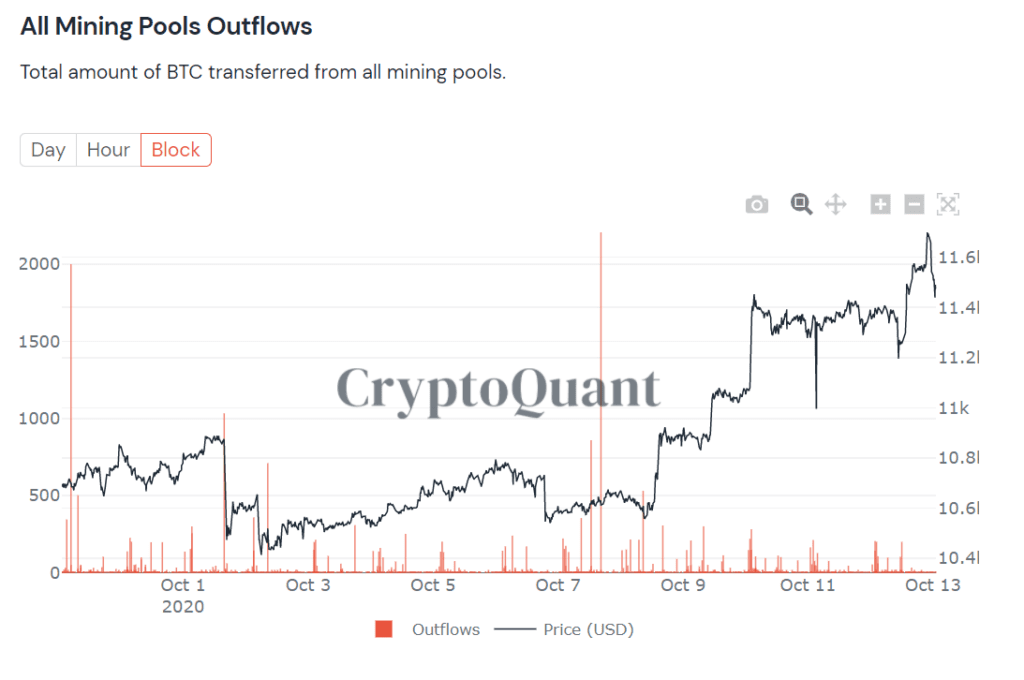