After the Bitcoin price broke through the important resistance levels around $52,000 and $55,000, the bullish sentiment seems to have definitely returned. At the time of publication, BTC was trading at $56,273, with a gain of 2.9% in the last 24 hours. On the weekly and monthly charts, BTC is showing gains of 15.8% and 44.7% respectively.

Trader Michaël van de Poppe sees the Bitcoin price action as bullish with a “beautiful rejection in the $56,000 area”. At the moment, BTC has managed to hold support and reclaim the critical zone above $55,000 once again. Therefore, the trader expects some sideways movement at current levels.

As the image above shows, van de Poppe has set the critical support area at $52,000 in case Bitcoin is rejected on its way to new all-time highs. If BTC loses this level, the price could return to its downtrend and crash as low as $46,000.

Among the reasons the trader has given for BTC’s rally is the passage of the new $1.9 trillion stimulus package by the U.S. Senate. On the current crisis, van de Poppe stated:

Deflation happened in the 1930s. The last time a massive crisis happened. During that deflationary period, Gold accelerated heavily, through high uncertainty levels of the mass regarding their governments. That will be Bitcoin this case.

However, the rally is also supported by solid fundamentals. As noted by Glassnode, around 35,200 BTC have left crypto exchanges in the past week. This shows that there is strong buying pressure, which, as CryptoQuant CEO Ki-Young Ju notes, is heavily clustered around Bitcoin whales.

These large investors have resumed an accumulation phase since late February and early March. The strongest support the whales have formed is $48,000, according to Young Ju, earning these investors a 17% profit. CryptoQuant’s CEO added:

If I were institutional investors, I would protect this 48k buying level by all means and make BTC break ATH again.

In support of the bullish case, Glassnode has determined that Bitcoin miners have been selling less of their funds since February. Therefore, they claim that this sector of the crypto market has returned to a neutral accumulation phase after going through “peak distribution” in January 2021 – as the image below shows, at that time miners were selling between 17,000 to 24,000 BTC per day. In that regard, Glassnode states:

On-chain data suggests a relatively strong bull case for Bitcoin this week. The major risk that one must keep in mind is that the key on-chain support level between $45k and $47k falls, many of our observations may swap from strong support to heavy resistance. 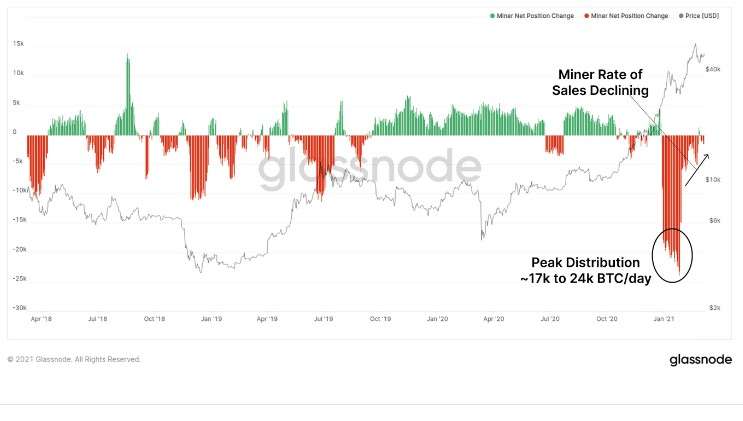 Analyst Lex Moskovski has recorded an increase in the funding rate on the derivatives market across major exchanges. Using data from Glassnode, Moskovski says that while it is not at February levels, however it shows that “people are becoming increasingly bullish.” 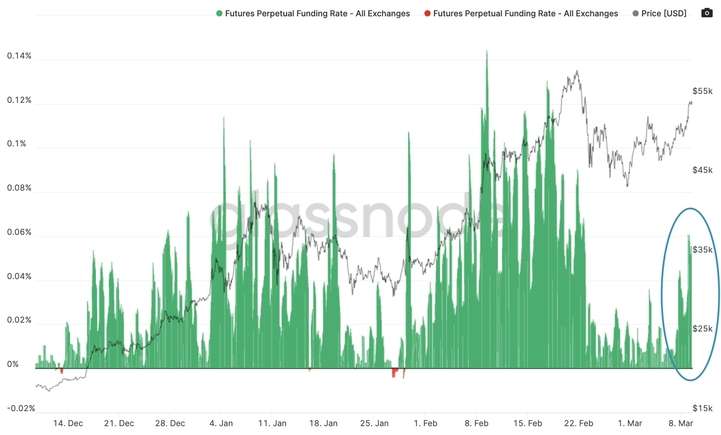 On the long-term outlook, Coin Corner CEO Danny Scott believes that Bitcoin is “mirroring” the price action of previous Halvings. Therefore, the bull cycle for the cryptocurrency seems to have plenty of room to rise.