Bitcoin is about to retest the $12,000 resistance level. At the time of publication, BTC is trading at $11,866, with a 2.10% increase in the last 24 hours. On the weekly and monthly charts, Bitcoin is posting gains of 1.1% and 0.7% respectively. However, analysts seem to agree that Bitcoin may suffer a pullback before it starts a sustainable uptrend.

Analyst Big Chonis released a brief update on Bitcoin’s price performance a few hours ago. According to the analyst, Bitcoin has closed the month August with the highest monthly candle since December 2017. However, the analyst also stated that there could be a spinning top reversal based on the volume which, as he stated, shows a strong indecision in Bitcoin’s price trend.

According to Big Chonis, the resistance level for Bitcoin could be as high as $12,479. In respect to the next meaningful support in the monthly chart, the analyst revealed that Bitcoin closed above its EMA12 and its EMA26 with a rising trend.

Still way above our EMA12 and 26, first meaningful support on the [EMA]12 is at 9,600 dollars and slightly rising.

$BTC – The August Monthly candle has closed…Lets take a look at it in this quick video update…#Bitcoin pic.twitter.com/YyYJYFUKJ6

In accordance with the Big Chonis analysis, the analyst “Teddy” shared the chart below. In this, Bitcoin broke the resistance level it had set at nearly $11,900 and has then seen a slight drop which the trader has qualified as a setback that could lead to a rebound above $12,000. 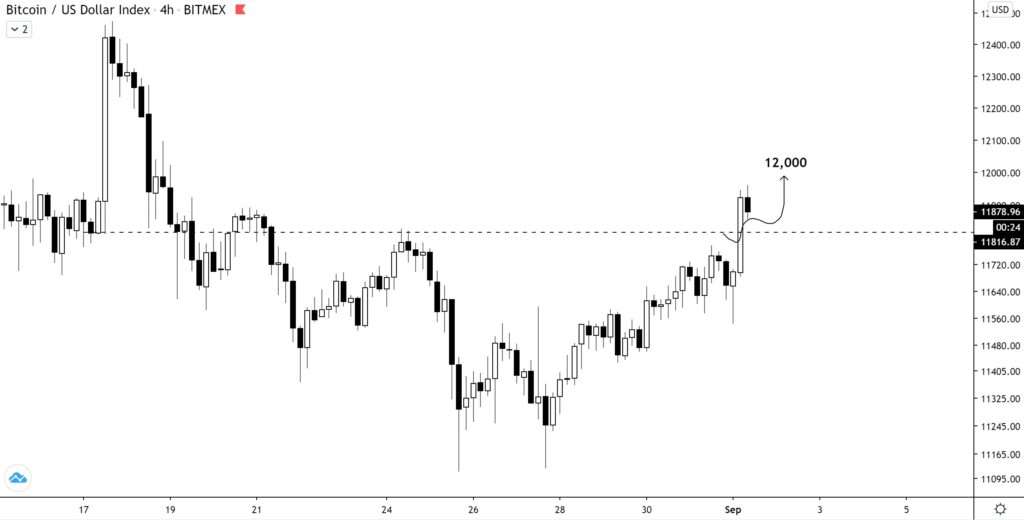 The renowned trader “SalsaTekilla” also recently stated that Bitcoin is at an important make-or-break point. According to him, a permanent breakthrough over several hours is necessary to convince him that the BTC will not be pumped through FOMO only at short notice.

I did not catch the up-move, sadly my 11500-11550 bids got front-ran the first wick down, and market never gave a 2nd chance. Wouldn’t FOMO long here, 12k is a strong level unless we hold above for multiple hours favoring shorts nearby.

The inventor of BTC’s stock-to-flow model, Plan B, is also optimistic. Plan B noted that BTC closed each month based on the model’s prediction. As can be seen from the chart shared by Plan B, Bitcoin is expected to begin an exponential increase as the current year ends. If the prediction is correct, Bitcoin should be close to $100,000 by 2021.

However, several analysts are predicting an “altcoin season”. In that sense, analyst Scott Melker showed a graph that illustrates Bitcoin’s loss of market dominance. Declaring the beginning of an “altcoins season,” the analyst expects Bitcoin’s dominance to continue to decline to its lowest level since July of last year, as shown below.