In a publication on Medium, Bitcoin’s self-proclaimed inventor, Craig Wright, is accused of plagiarizing the legal dissertation that allowed him to complete his graduate law degree in February 2008. The publication was made by an author who identified himself as Paintedfrog and, at first, recounts the number of times Wright has spoken out against plagiarism.

The dissertation is entitled “The Impact of Internet Intermediary Liability”. The dissertation consists of 90 pages that, according to Paintdfrog, are “highly” plagiarized. Some sections would have been copied word for word without making the required citation or giving credit to the original author.

Paintdfrog offers as evidence a paper by Hilary E. Pearson called Liability of Internet Service Providers, published in 1996. According to Paintdfrog’s findings, Wright copied 14 pages of Pearson’s work without mentioning it in his own dissertation. The introduction would have been copied in its entirety, as can be seen in the image below. 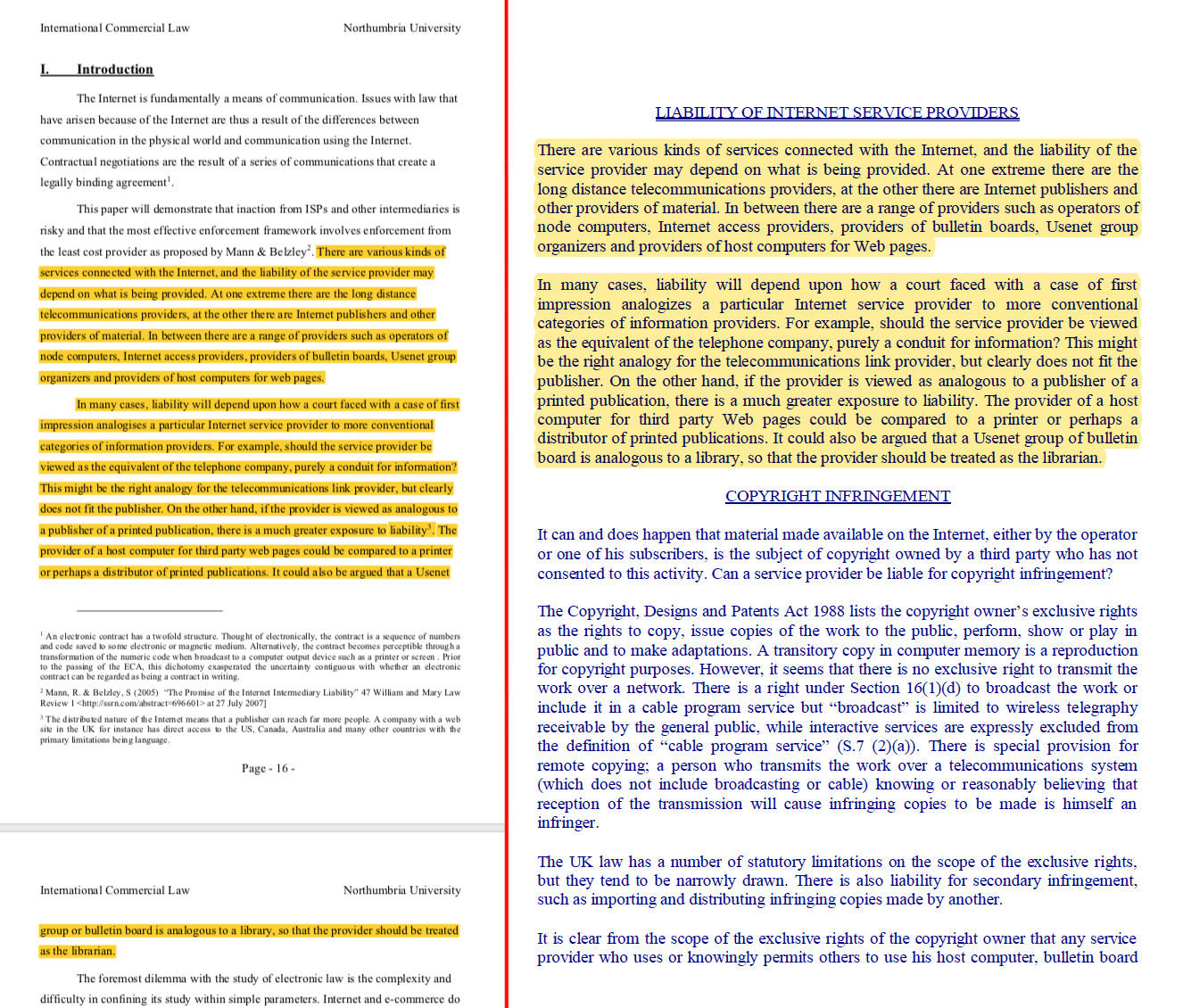 In other cases, Wright allegedly copied works, but paraphrased or changed the words. Paintdfrog states the following:

Pearson’s Liability of Internet Service Providers contains 58 paragraphs. Wright appropriated 45 of them; 25 in full and 20 in large part. This plagiarism is extensive and methodical, and cannot be explained away as an oversight in neglecting to cite the author.

Paintdfrog accuses Wright of plagiarizing another Pearson work published in 1998, Intellectual Property and the Internet: A Comparison of U.K. and U.S. Law. A paper by authors Ronald Mann and Seth Belzley published in 2005, entitled The Promise of Internet Intermediary Liability and Other Works. Paintdfrog claims that this has no explanation other than plagiarism for the amount of evidence he found.

In addition, the author of the publication in Medium highlighted Wright’s conduct against plagiarizers. In the past, the promoter of Bitcoin SV has called them “dishonest”, “unethical”, “frauds”. Finally, Paintdfrog found evidence that Wright, in making a plagiarism claim against author Jo Stewart Rattray, would have committed plagiarism.

Craig Wright has been quick to accuse plagiarizers and those he thinks have gone against him. Last year Wright sued the co-founder of Blockstream for defamation. The suit was filed in June 2019 in the United Kingdom. Back hired the firm RPCLaw to defend him.

RPC were then hurriedly contacted by SCA, before SCA had even been notified that RPC were representing me (which SCA discovered via RPC’s court filing of my intent to contest). SCA said please stop defence as Craig had pre-emptively notified court he was discontinuing the case.

Back said that SCA’s legal representation did not explain the withdrawal of the lawsuit, but Wright agreed to pay 100% of Back’s legal costs. This sum is estimated at around £20,000. Although Back speculated that the dismissal may have had something to do with Wright’s case against Ira Kleiman. In that lawsuit, Wright must pay his plaintiff’s legal costs, estimated at $160,000.

Of the £20,000 Back received from Wright, Blockstream’s co-founder said:

(…) I have to thank Craig for paying for a very informative 2hr+ briefing on latest UK libel law trends (…).