After bloody days for the crypto market the Bitcoin (BTC) price remained over the key level of $10,000. As a result, several analysts have stated that the cryptocurrency may have hit bottom, while others do not rule out the possibility of a further sharp decline. At the time of release, however, Bitcoin is trading at $10,263, with a small upside of 1.0% in the last 24 hours.

As reported by CNF, experts have cited three main reasons for the crash. The first is the raid on the South Korean exchange Bithumb by local authorities. As a result, the market may have been affected by the uncertainty this news caused among South Korean investors. Another reason is the presumed correlation between Bitcoin, traditional markets and gold.

Prior to Bitcoin’s downturn, the stock market and the metals market also showed a strong correction. In that sense, day-trader SalsaTekila pointed out the following for the upcoming week:

Traditional markets re-open Tuesday, they were a driving factor for $BTC downside past week. I’m not picking directional gambles until then. Fade city.

Meanwhile, the recovery of the US dollar was also part of the speculation about the crash of Bitcoin. However, analysts like Josh Rager also pointed out that Bitcoin may have fallen due to the gap in CME futures contracts. Bitcoin tends to close these gaps, and Rager was looking for a close at the $9,665 to $9,9925 mark. As Rager has now noted, BTC may now have finally closed the gap:

CME Bitcoin Futures gap was “explored” – as the price didn’t move all the way down to $9665. But the price did wick into the gap at $9905 on the futures chart. Gaps are speculation regardless but I’d like to think this was good enough for a bottom. Time will tell…

Is the worst over for Bitcoin?

Bitcoin’s current price performance has occurred in line with Rager’s analysis, for the time being. The operator Byzantine General advised its followers to buy the dip for Bitcoin and Ethereum. On the other hand, analyst Teddy said that Bitcoin has held the “panic support level”. Teddy stated that investors can “chill about it” and marked the $11,700 as a major resistance level in the Bitcoin macro trend. 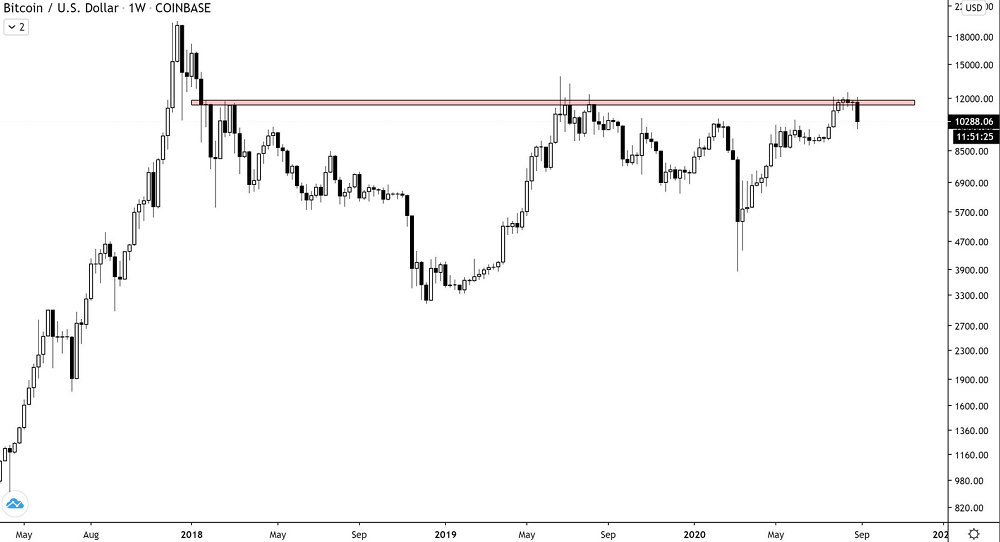 Another renowned trader, Credible Crypto, expressed relieve about Bitcoin’s recent price move. The analyst stated that “the worst is over” and set a probable target at $10,650 for BTC.

We are getting some relief across the board. $BTC likely to $10,650 ish, $ETH to $360 ish. Break those levels and the bottom MAY be in. Fail to do so and we get one final leg down. Regardless, the worst is now over imo.

In that sense, the trader expects prices to rise again after the current consolidation is over. From that moment on, Bitcoin’s price could rise to a new yearly high of $14,000 to $17,000 and then experience a further correction of 35-40%, according to a prediction by Credible Crypto.

Bitcoin BTC
Previous ArticleRipple aims to monitor the XRP Ledger for compliance with US regulations
Next Article IOTA: Collaborative consensus is significantly superior to PoW and PoS