Bitcoin price is currently showing a small retracement while losing market share to altcoins. At the time of publication, Bitcoin was trading at $57,680 with a slight loss of 2.8% on the daily chart. On the weekly and monthly charts, BTC is up 3.4% and 18.4% respectively. The market capitalization remains above $1 billion.

Trader “Teddy” believes that the current price action has positioned Bitcoin at a crucial level. According to his analysis, the cryptocurrency is retesting its exponential price action (EMA), a metric that focuses on recent price fluctuations, from the last 21 days. Teddy finds a “notorious resistance point” at current levels. He pegged the low 40,000’s as support. The trader added, “If you bounce from here, you’re going to find a Lambo on your tree.”

For the blind homies pic.twitter.com/lXaU6zPLaZ

Analyst firm Whalemap has indicated that there is an “intense battle” in the support and resistance zone for Bitcoin. As the image below shows, Bitcoin price has a major support level at $57,000 and $55,172. Losing these levels could lead to an extension in the downtrend to test support at $40,000 as indicated by Teddy. Whalemap added:

Bitcoin is being capped by the $60,045 level pretty spot on. Is this the calm before the storm? 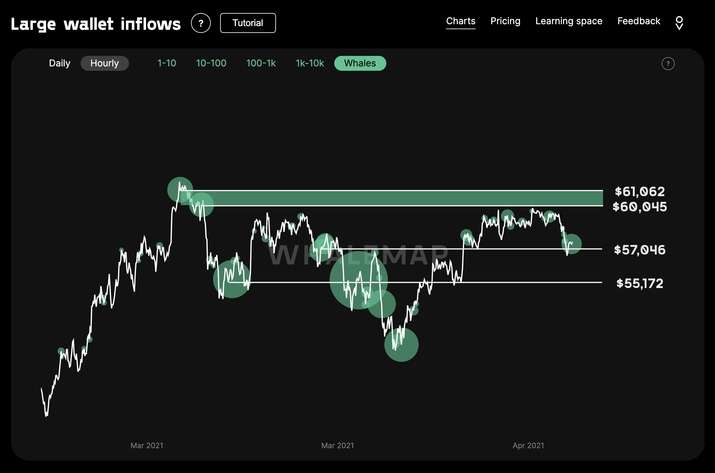 Why are altcoins outperforming Bitcoin?

In support of the above, analyst Willy Woo said that $54,000 is the strongest “support area” Bitcoin has had since it stood at $11,000. In that regard, the analyst has determined a pattern in BTC “wallet flows” in which a period of consolidation precedes a jump to new ATHs. Woo said:

Typically, BTC forms a strong base of price discovery 2-3x above the (prior cycle) all-time-high before launching into bull market highs. This phase is almost complete.

Meanwhile, investors’ movements in Asia have been relevant to Bitcoin’s price action. CryptoQuant CEO Ki-Young Ji stated that “Bitcoin fundamentals” are strong, but he is concerned about the “Korean Bubble.” The BTC Kore Premium Index metric is at an all-time high. 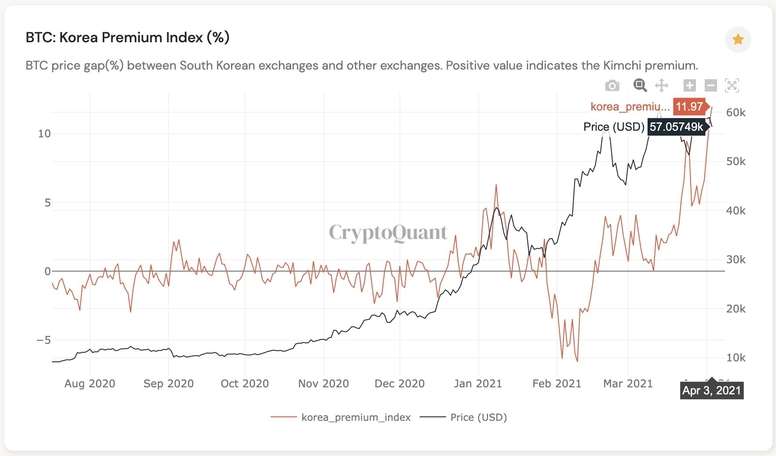 According to CryptoQuant data, trading in the last 24 hours stands at $61 billion, or 1.7% of global crypto trading. An important factor to consider is that in South Korea, taxpayers will have an exemption for their gains if they are investing in cryptocurrencies until the end of the year.

As a result, many people in this country have chosen to allocate money to these assets. However, investors will be held accountable if they continue to trade cryptocurrencies next year. So, a lot of the new participants could withdraw their money before the year ends. Hence, the concern of CryptoQuant’s CEO. While he believes that even if the “bubble” bursts its impact will be small, he indicated that much of the trading has gone into altcoins:

Korean government prohibits derivative trading in Korean exchanges, so the only way to get rich in the short term is to get a ride on shitcoin pumpings.