Bitcoin has broken a new all-time high by exceeding $30,000. The cryptocurrency has had its best two weeks since December 2017 and the bullish trend seems unstoppable. Analysts are bullish as BTC continues to move into uncharted territory.

The crypto community celebrates the new all-time high. Trader  SalsaTekila recommended his followers not to “be fooled” to short BTC. The trader believes that at this point it is better to trade altcoins and stated that he will keep his attention on Ethereum predicting a possible increase in the price of ETH.

In an equally bullish tone, trader “Edward Morra” believes that $30,000 will be a temporary price top for Bitcoin, just like the previous all-time high of $20,000 in 2017. BTC bears could take advantage of this price to short in the current range, otherwise, the trader has set $32,000 as the next target for the cryptocurrency.

There is some supply at $30k but not much above it. This is probably the only place sellers can step in, otherwise the next big batch of supply is around $32k pic.twitter.com/oeZaJzs72a

CryptoQuant CEO Ki-Young Ju revealed data that shows an increase in the amount of BTC that has outflow from Coinbase. The outflow of the cryptocurrency into cold wallets is possibly caused by over-the-counter (OTC) deals from institutional investors. 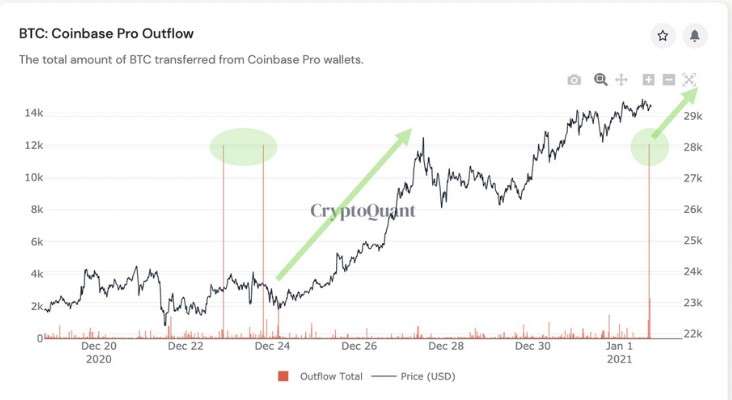 Ki-Young Ju believes that investors will continue to accumulate BTC, despite the resistance they may have in the current price range. Analyst Joseph Young agrees that institutions have made large purchases of BTC in the last 48 hours pushing the cryptocurrency above $30,000. Young said the institutions will  “pass the big sell walls” on Binance and Bitfinex.

However, the analyst expects BTC to see a correction just like when BTC reached $20,000. This is because investors could take the opportunity and collect profits. In that sense, CryptoBirb shared the graph below. There the trader predicts a “violent” retrace of between 30% and 40% that would put BTC’s price close to $18,000 to $20,000 before seeing a recovery.

At those levels, the new BTC investors could present a “sentiment leaning towards fear” that would increase volatility in the benchmark cryptocurrency. However, on-chain data analyst Willy Woo differs:

In the traditional world, good investors sell near highs and buy near lows. These are assets at market saturation. With technology gaining adoption, the VC strategy is to buy successive rounds at ever increasing highs, they don’t invest in down rounds. Treat BTC as the latter. 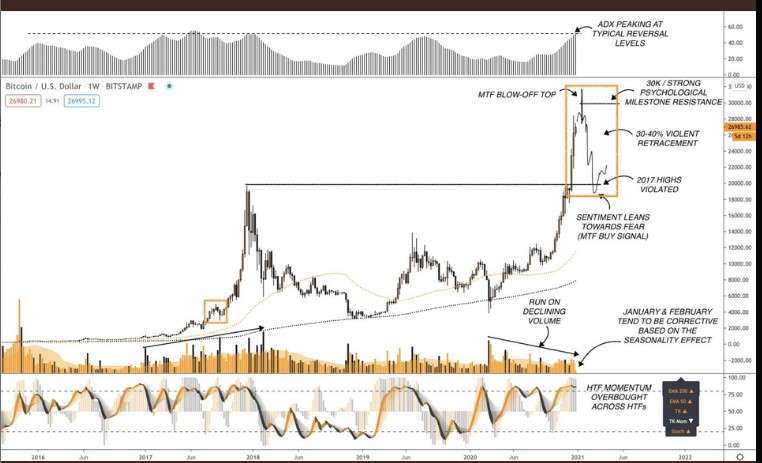