Although Bitcoin was unable to maintain the USD 14,000 mark over the past weekend, there are many reasons why investors and traders can be more optimistic than ever. The Bitcoin price reached around USD 14,080 on Friday, the highest price since the legendary bull run in late 2017. Bitcoin also started the month of October at around USD 10,500, which means that BTC has risen by around USD 3,500 in less than four weeks.

It is noteworthy that the current upward trend of Bitcoin coincides with several major events in the world and related uncertainties, including the pandemic and tomorrow’s U.S. elections. Compared to the S&P500 or even Gold, Bitcoin has been the best performing asset in recent weeks.

As macro-analyst Willy Woo recently pointed out via Twitter, Bitcoin managed to break out of the correlation with the S&P500 that has persisted since March of this year. While the S&P500 has been following a downward trend since mid-October, BTC was able to record massive gains. Even the price of gold weakened in the past two weeks in the face of global uncertainties. In this sense, Woo explained that there are first signs of a decoupling between BTC and stocks, as the chart below clearly shows. 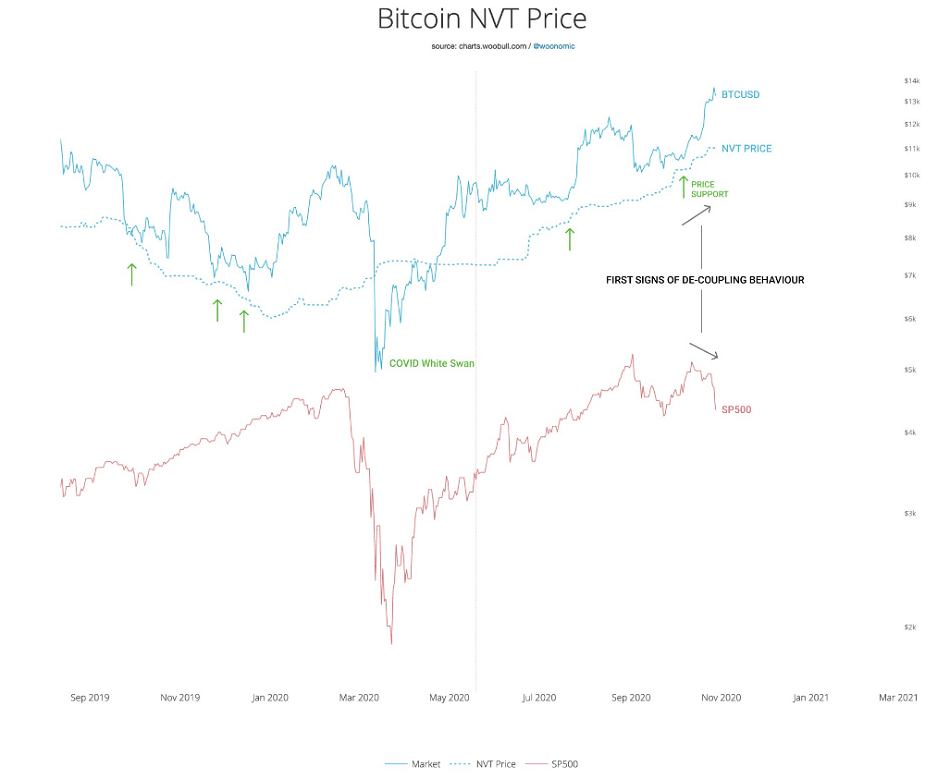 Bitcoin will decouple from traditional markets soon, but driven by its internal adoption s-curve (think startup style growth) rather than changes in perceptions as a hedging instrument by traditional investors. Fundamentals of user adoption have already broken all time highs.

Note that stocks may continue to rise, if that’s the case the notion of de-coupling is not so important. What this test shows is that if stocks crash, Bitcoin powered by its large adoption s-curve, swallowing ever more capital, will present perfectly good safe haven properties.

In this sense, “Crypto Daily” also recently pointed out another important factor in the current rally. Bitcoin is in a “liquidity crisis”. As the chart below shows, whales are hodling their Bitcoin. Contrary to the normal trend of increasing Bitcoin deposits at exchanges with a rising price, the opposite is currently being observed.

Despite the rising price, fewer and fewer BTCs are reaching the exchanges. This results in a liquidity crisis for the exchanges, which do not have enough Bitcoin to serve their customers. Due to the high demand and low supply, there is a not inconsiderable buying pressure on the price. 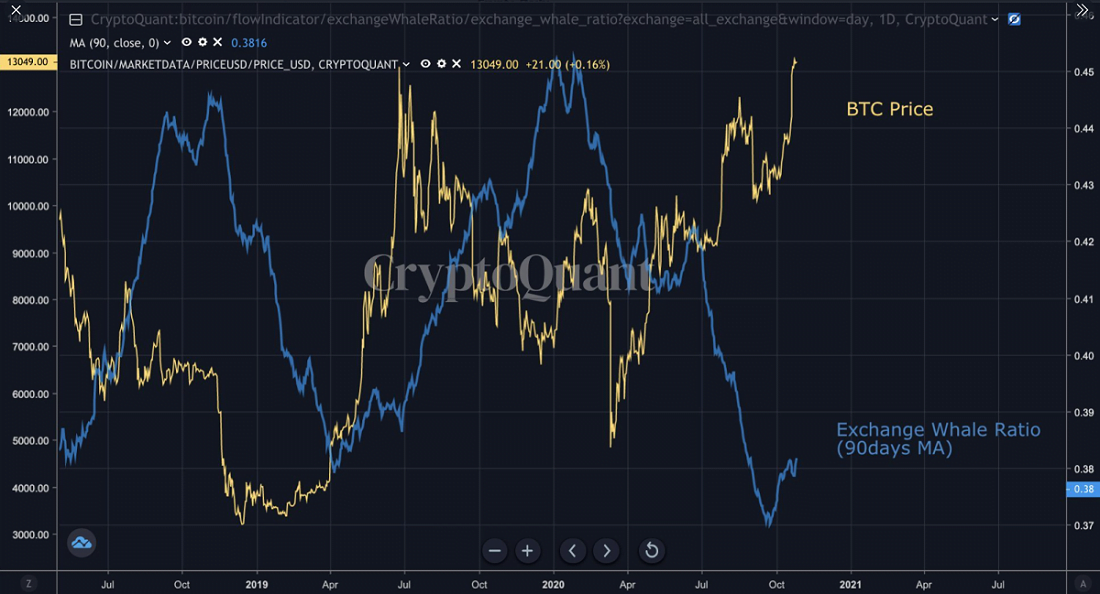 And like the data of Google trends shows – the search volume accounts only for 61% of the yearly high of May – the demand comes this time allegedly not from retailers as with prior bull runs, but from institutional investors, who want to jump on the Bitcoin bandwagon.

In recent months, Bitcoin has attracted large investors such as Square and MicroStrategy. Grayscale achieved another massive record in the 3rd quarter of 2020. PayPal also announced that users can buy and sell the cryptocurrency. All in all, the outlook therefore seems rosier than ever.