Bitcoin has been stuck in a sideways trend in the $9,100 to $9,600 price range for a week now and has not yet managed to break out either up or down. However, this has changed in the last few hours. The Bitcoin price has risen by 2.78% within the last 24 hours to a price of $9,647.72. The market capitalization has climbed to $177.31 billion at the time of writing.

In contrast to Josh Rager, Bitcoin Trader “Byzantine General” describes that Bitcoin is still within the described price range between $9,100 and $9,700 despite the short-term price increase of 4 %. He goes on to say that Bitcoin did not break through the strong resistance, but was clearly rejected along the $9,800 mark.

According to the anonymous trader “TheCryptoCactus” a good entry opportunity for a long position could arise. He states that on the 4-hour chart the $9,500 mark could serve as a new support and Bitcoin could start a new upward movement from here:

If we reach a closing price of over $9500 on a 4-hour candle, I think a decent long position with fairly low risk could be taken if the level seems to hold as support throughout the day’s close.

Bitcoin and commodity trader “Cold Blooded Shiller” noted that the volatility of Bitcoin has decreased and a few hours ago cracked the important mark along the $9,400. He goes on to say that on Binance there were a number of short positions placed along this important mark, but all of them were liquidated due to Bitcoin’s recent price movement.

The CEO of the data analysis company CryptoQuant stated that Bitcoin will enter a new bull cycle from mid-July, as according to his analysis many whales have started to withdraw their Bitcoin stocks from stock exchanges to external wallets. According to the company, a similar development was already observed in 2017, when Bitcoin rose to its all-time high of $20,000, and in 2019, when BTC rose from $4,000 to $14,000:

Buy Bitcoin when the whales send Bitcoins out of the market. The bull market usually begins four months after the year’s high of the average withdrawal from the exchange. 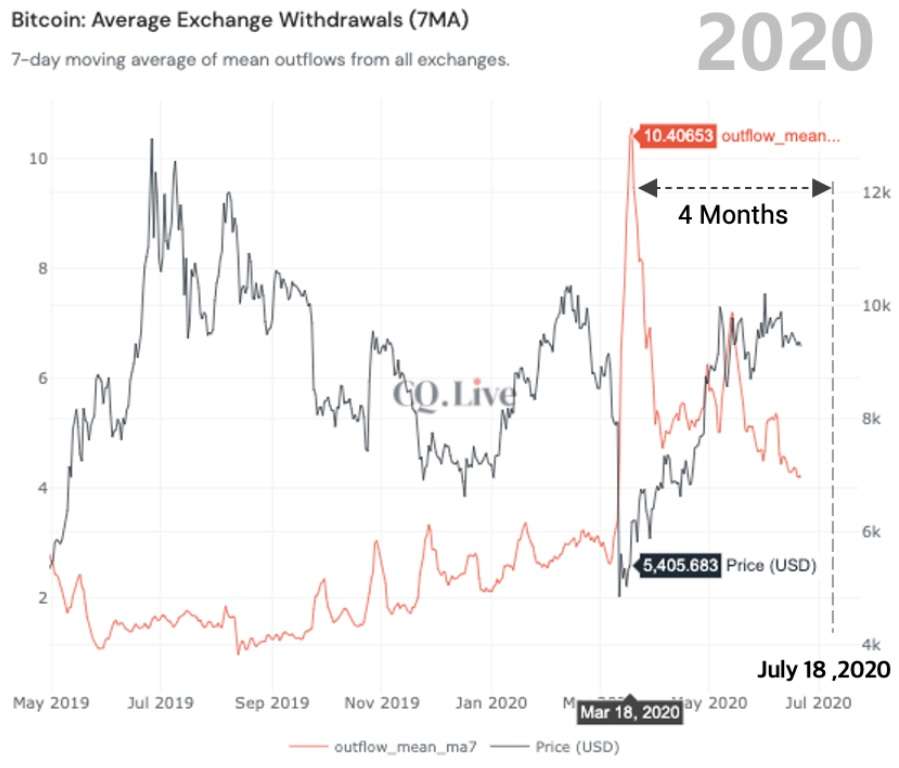