The Bitcoin price rose to a new all-time high of $29,600 in the last few hours and bounced off this resistance in the first attempt. Nevertheless, the correction was rather mild, to just under $29,000. Subsequently, Bitcoin was able to resume the uptrend and stands at $29,303 at the time of writing. Thus, BTC recorded a gain of 0.78% within the last 24 hours. The market capitalization has risen to $544 billion.

Many experts have predicted that Bitcoin could test the $30,000 mark in the coming days. Josh Rager also states on Twitter that Bitcoin will target the $30,000 mark after successfully breaking above the resistance level of $29,200, true to the current fundamentals. However, caution is advised as a sharp correction down to $25,000 could follow.

We've seen Bitcoin get bought up several times now – with a break above $29,200 – IMO cold have the legs to push to $30k+ pic.twitter.com/ZxiGXHGhAY

The Fear and Greed Index clearly indicates that the current market is driven by great greed and is in an overbought zone. Investors should therefore be cautious, as a correction could be imminent.

The hunger among investment soul investors for bitcoin nevertheless remains strong, as new data from asset manager Grayscale shows. In December 2020, the firm bought 3 times as many Bitcoins for its Bitcoin Trust as could be newly produced by miners. According to data from Coin98 Analytics, Grayscale bought a total of 72,950 BTC worth $2.132 billion, whereas only 28,112 BTC worth $827.7 million were produced by miners.

According to anonymous trader “Loma”, there is a strong resistance at the level of $29,800, which Bitcoin must first overcome in order to continue the upward trend of the last few days. Traders should be particularly attentive, as he believes BTC has the power to break this resistance already in the first attempt and directly conquer the $30,000 mark.

“Byzantine General” pointed out in a tweet yesterday that there are a lot of sell orders in the order books of the major exchanges near $29,500, however Bitcoin seems to have simply “eaten” those orders and continued its bull run. The trader is bullish for the new year and expects Bitcoin to crack the $30,000 mark soon.

I'm a bit hungover lads, but apparently I went long and I'm in profit so that's cool.

Bitcoin outperforms all other assets

As a new report shows, Bitcoin is the best performing asset of the last 10 years with an annual price increase from 2011 to 2020 of 203.5%, outperforming industry giants such as the S&P500 or the US Nasdaq100. CharlieBilello shared a chart on Twitter that shows Bitcoin outperforming all other assets by a wide margin almost every year. 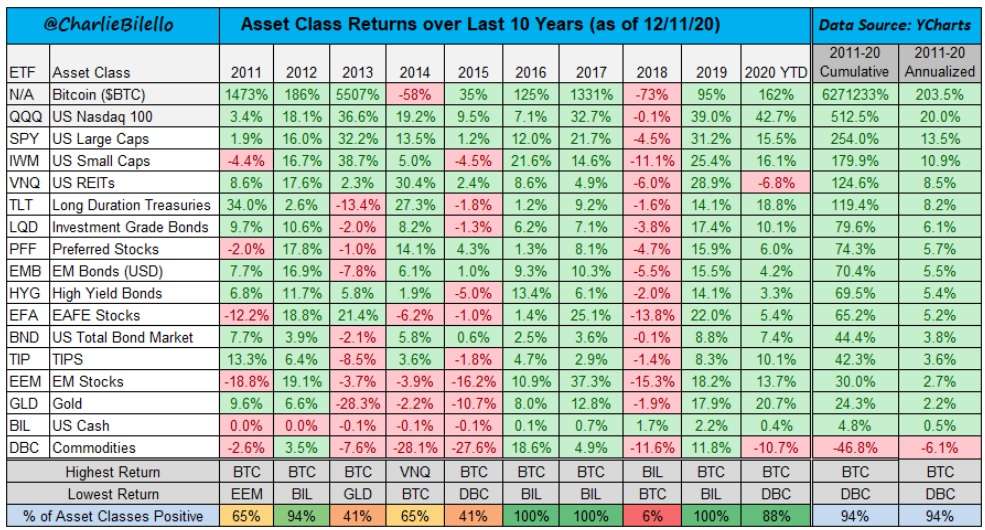