Over the past few days, the performance of the Bitcoin (BTC) price has kept investors on hold. BTC has remained just above its critical support level of $10,000. At the time of publication, BTC is trading at $10,297 with gains of 1.07% over the last 24 hours.

In a new video from the analysis firm Blockroots about Bitcoin’s price performance, analyst Josh Rager declared himself “neutral” with respect to the performance of the cryptocurrency. However, the analyst believes that the current trend is more sideways with a greater downward pull.

The analyst offered his impressions on the daily, weekly, and monthly performance for Bitcoin. On the daily chart, Rager believes that there are good signals. He expects that Bitcoin could stay above the support range between $10,200 and $10,300. From there, Bitcoin could rise to $10,400 and then return to the pre-drop support level in the $10,800 to $11,000 range, as shown below. The trader expects that if Bitcoin manages to return to this level, it will test the $12,000 resistance level again.

At the daily level, Rager also noted that the Chicago Mercantile Exchange‘s gap for futures contracts continues to be a hurdle for bulls. As shown in the chart below, Bitcoin’s price has barely explored the gap which is close to $9,600. The analyst claims that this gap is closed 90% of the time, and therefore a drop to this level is likely. However, Rager doesn’t consider it “necessarily bad” for Bitcoin.

The trader emphasized the uncertainty surrounding the price of Bitcoin. But he indicated that the current trend in the price of cryptocurrency is in line with its historical behavior. On the other hand, the trader stated that he will feel much more bullish if in the weekly chart, BTC manages to close above the support area of $10,400.

On the monthly chart, Rager stated that many investors are feeling bearish. However, he noted that there is still room for an upward movement. The trader disagrees with the bearish interpretation of the monthly Bitcoin chart and while showing the chart below, he stated the following:

If the price in three weeks rises above $10,700 it will be a great signal to Bitcoin that it will continue to rise and hopefully it can test this next area of resistance, a major level, near $13,800.

Rager is one of the analysts who have highlighted the correlation between Bitcoin and the traditional market. In that regard, Bloomberg analyst Mike McGlone wrote in a recent report that a “stock market reversal” is putting pressure on most assets, including Bitcoin. However, McGlone expects gold and Bitcoin to come out “ahead” in the long run. On Bitcoin’s current performance, Bloomberg’s analyst noted that the cryptocurrency has returned to an old level of resistance, as can be seen in the graph below. 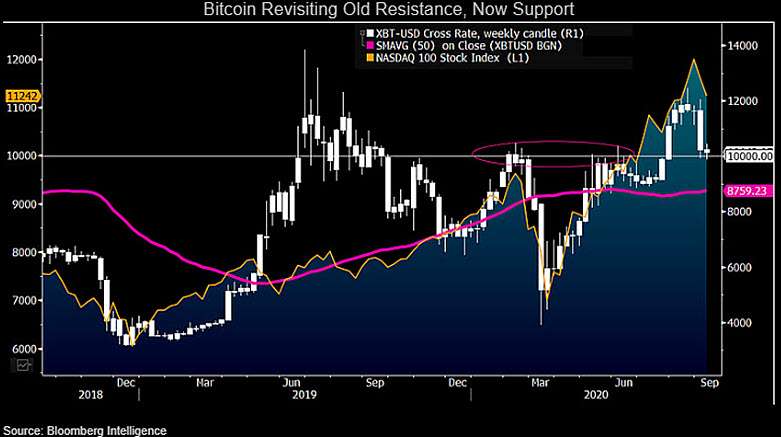 The analysis firm Glassnode has also pointed out another bullish indicator for Bitcoin. Despite the drop in price, Glassnode says, the number of addresses with at least 1 BTC has shown “continuous growth” in recent years. This indicates a growing adoption of the cryptocurrency that could impact its price to the benefit of holders. As shown below, the number of addresses with 1 BTC reached a new high on September 8 of this year and stands at over 823,000 addresses. 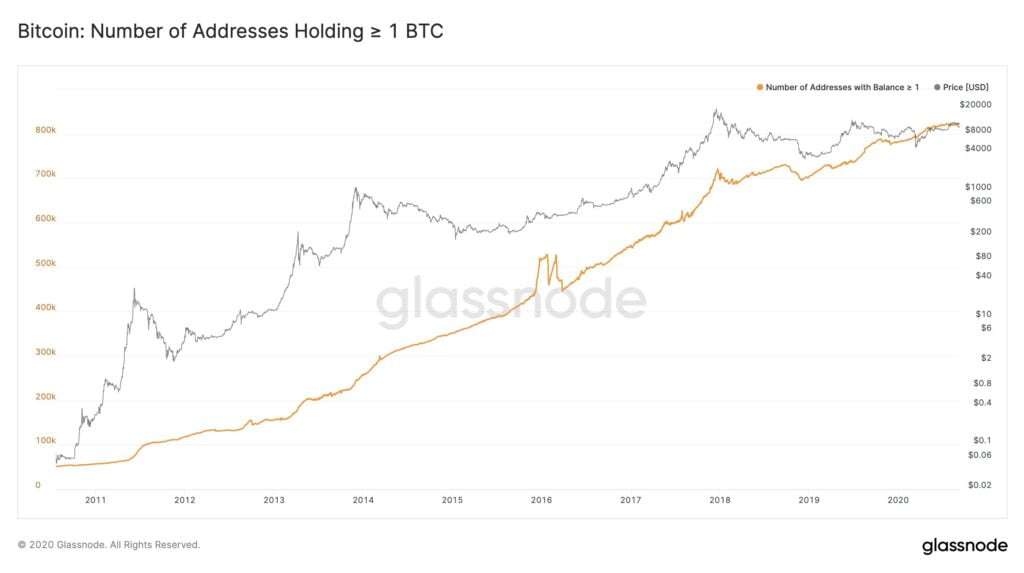 Bitcoin BTC
Previous ArticleNot only DeFi exploded in the cryptocurrency market, SaTT ICO also did
Next Article A guy makes $150 in Anyswap in every hour: Here is how