Since last Thursday’s crash, when Bitcoin fell from $9,900 to a short term $9,080, the price has been in a sideways trend and is in the range between $9,300 and $9,550. Since the crash, trading volume has dropped significantly, so Bitcoin now seems to be waiting for another boost, either from the bulls or bears. At the time of writing, BTC was trading at $9,430 USD, down slightly by 0.06% over the past 24 hours.

Although market sentiment is still predominantly bullish, the resistance at USD 10,000 since the beginning of May has proven to be insurmountable (at least permanently). In addition, some analysts point out that the recent rejection at $10,000 may have changed the sentiment in the market, with the $9,700 mark having become a strong resistance again, as evidenced by Bitcoin’s on-chain data.

As IntoTheBlock recently noted, $9,732 could be the next major resistance level. According to the In/Out of the Money Around Current Price (IOMAP) analysis, there are 2.3 million addresses with around 1.35 million BTC available with positions at this mark.

This could represent the next big level of resistance for Bitcoin’s price to go over $9,732. Looking at the IOMAP from a volume perspective, we see that those 2.3 million addresses hold 1.35 million #BTC, which is a sizable volume. #bitcoin #crypto #bitcoinprice #cryptocurrency pic.twitter.com/H9jMiC3pwc

At the same time, IntoTheBlock also pointed out that if Bitcoin should fall, the IOMAP analysis shows that the next support level is between $9,172 and $9,442, where almost 805,000 addresses are waiting with 509,000 BTC.

Meanwhile, the well-known analyst Eric Thies shared an analysis that two important trend indicators, the Stochastic RSI (SRSI) and the Chaikin Money Flow (CMF), could announce a massive uptrend when looking at the macro level. Bitcoin’s two-week Stochastic RSI is on the verge of breaking a downtrend that was formed in the course of the USD 20,000 crash. The last time this happened, the bull run of 2017 from around $700 to $20,000 was initiated.

As Thies also explained, the CMF is also massively bullish. In the case of CMF, the position of the closing prices within the trading range is set in relation to the volume traded, thereby examining whether ‘accumulation’ has occurred. This is used to measure whether buying pressure has been built up, which is usually results in rising prices. Thies shared the chart below and explained with regard to both indicators:

CMF climbing along to a level on 1M TF that it hasn’t climbed to since it was $700. Also, 1M SRSI has crossed-up, and each time this has happened led to 3x returns at least. Soon. 🔥 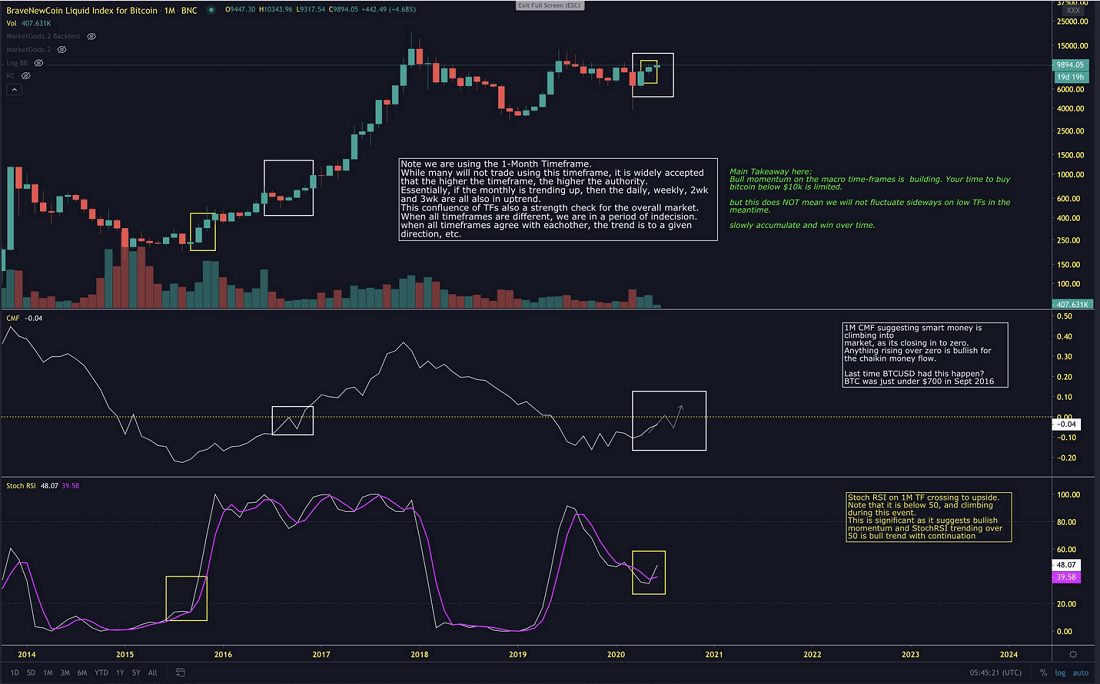