Josh Rager, Bitcoin Trader and Blockroot founder, writes on Twitter that Bitcoin has broken the strong resistance on the daily chart along the $9,600 mark and is currently showing no signs of bearishness. Should Bitcoin close above the $10,370 mark on the daily chart, he believes this would be an extremely bullish signal for Bitcoin and the market as a whole.

The famous trader Scott Melker says that Bitcoin is about to start a new bull market. In the four-year chart, Bitcoin needs to break through a strong resistance along the $10,500 mark to target a new all-time high. If Bitcoin breaks through this level in the coming weeks, it could mark the biggest bull run in Bitcoin’s history, Melker said.

Jonny Moe, Bitcoin trader and analyst, is also bullish for Bitcoin and states that the last price move to $10,380 was important for the coming months. However, he also points to the resistance along the $10,500 mark that needs to be broken to confirm a long term uptrend. On a larger time frame, Bitcoin sees the potential to test the $12,000 to $13,000 mark in the coming weeks.

Data from the analysis platform skew.com show that during the sudden increase, short positions on BitMEX worth more than $80 million were liquidated. This development could be observed within only one hour and considers only figures from BitMEX. Traders did not foresee the sudden price increase, so many investors were surprised. 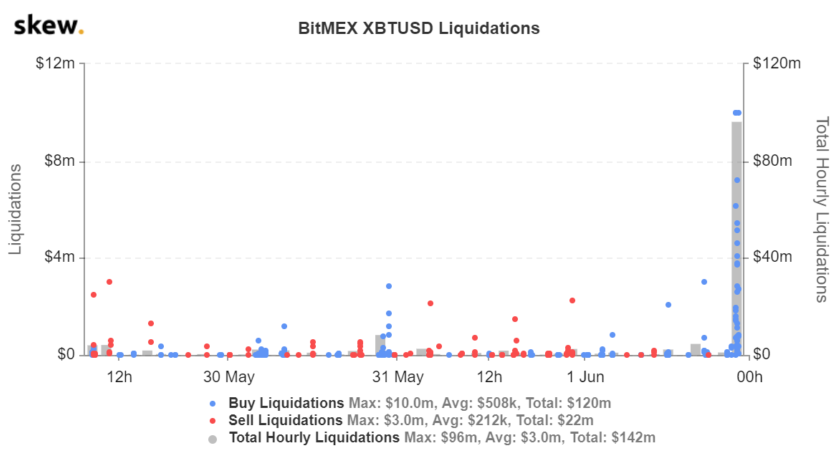 Mike Novogratz, a multi-billionaire and Bitcoin bull, also says that the Bitcoin price will rise rapidly due to the continued loose monetary policies of many central banks around the world, which are pumping billions more of Fiat money into the market. Novogratz agrees with Paul Tudor Jones, who also called the billion-dollar helicopter money a catalyst for BTC. Novogratz says:

$BTC is coiling. It will take out 10k soon. All the tragic turmoil in the USA adds to the narrative. Budgets are going one way and it’s the opposite of balanced. When 10k goes it will move fast. Get on the train.

The Altcoin market is also following the positive market trend of Bitcoin, so that the Ethereum price also shows strong gains. ETH rose by 3.95 % within the last 24 hours and is trading at a price of $248.16. XRP is also recording significant gains of 3.33% and is rising to a price of $0.21. The “silver” of the crypto market, Litecoin, records gains of 5.87 % to a price of $48.73. You can check the prices of over 5,000 cryptocurrencies in our marketcap chart.