The institutional interest in Bitcoin (BTC) is at a turning point. Industry experts predict a further increase in the adoption of the cryptocurrency as “the herd approaches”. Outside of space, investors such as Paul Tudor Jones are highly bullish.

In an interview for CNBC’s Squawk Box, Jones said he’s more convinced about Bitcoin now than he was in May when he announced his investment in Bitcoin (BTC). At the time, Jones compared BTC to gold and said it would be one of the best assets to hedge against the U.S. Federal Reserve’s measures. Time seems to have proved him right. However, this time he found it more appropriate to compare Bitcoin to a Silicon Valley company:

I came to the conclusion that btc was going to be the best of the inflation trades–the defensive trades. Bitcoin has a lot of characteristics of being an early investor in a tech company…it’s like investing with Steve Jobs and Apple.

Data from Forbes Crypto shows that, in fact, Bitcoin has performed better than the stocks in the traditional market. When reviewing the performance of the Nasdaq 100 and Bitcoin (BTC), the cryptocurrency shows a growth of 32%. A comparison with the S&P 500 is more impressive; BTC has outperformed the index by 1,600%. 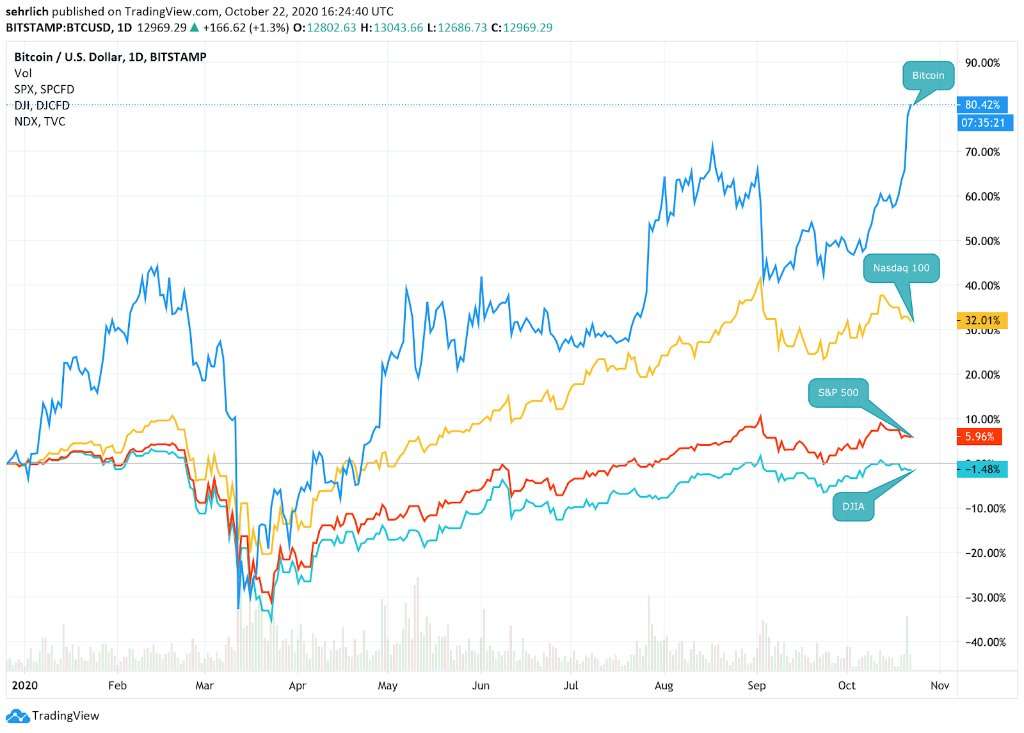 Backing this up, Senior Commodity Strategist for Bloomberg Intelligence, Mike McGlone, finds a bullish outlook for Bitcoin. As the image below shows, Bitcoin is outperforming Nasdaq and still has room to grow in 2021. McGlone stated:

Bitcoin breaching $12,000 resistance vs. the #Nasdaq100 backing away may indicate firmer underpinnings for the crypto in 2021. At similar levels since 2017, diminishing supply and the foundation of an 80% correction, along with an extended period of underperformance, favor BTC. 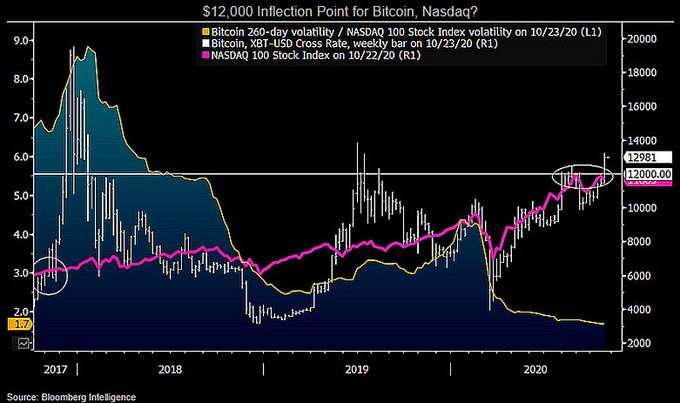 In total, Bitcoin (BTC) records a gain of 80% in one year with an estimated 98% of its UTXOs in gain, as shown below. Tudor Jones said that one of the reasons he feels more optimistic about Bitcoin is its community. The legendary investor believes they are “among the smartest people in the world. Therefore, he expects further growth in the cryptocurrency. 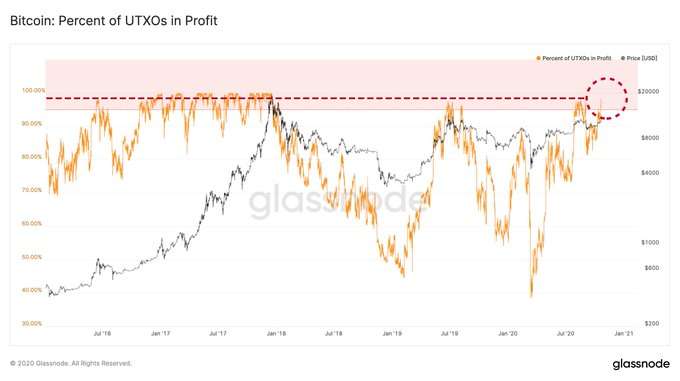 Adoption of the Bitcoin Standard (BTC)

Since the announcement of the purchase of over 38,000 BTCs by the S&P 500 company, MicroStrategy, its CEO Michael Saylor has become one of Bitcoin’s most prominent advocates. In the program hosted by Raoul Pal, Real Vision, Saylor reiterated the company’s intention to “Hodl Bitcoin for over 100 years”.

In that sense, Saylor indicated that the purchase of BTC was not an impulsive decision, but part of an internal consensus in the company. MicroStrategy’s strategy has made Bitcoin its primary reserve asset. About this and the potential of Bitcoin’s as a store of value, Saylor said: