Since the beginning of September, the Bitcoin price has risen from $9,800 to $16,274.39, representing a price increase of more than 43% in the last 30 days. Thus Bitcoin is the best performing cryptocurrency within the Top 20 largest cryptocurrencies. After BTC recently bounced off the important support level of $15,775, BTC is currently experiencing a further price increase.

Analyst Big Chonis Trading states that Bitcoin first broke through the rising support downwards in November, but a few hours later followed a renewed upward trend. In addition, Bitcoin’s weekly chart showed the third highest chart close in BTC’s history. As a result, he believes that Bitcoin is preparing for a further upward movement towards the $17,000 mark.

$BTC – still the third highest weekly close ever …would have been the second but missed it a few bucks…#bitcoin. pic.twitter.com/BeQn2WVuzW

“yTedd” describes that Bitcoin could continue to rise in the coming days and continue its upward trend. The 4-hour chart is showing bullish fundamental data for BTC. According to the trader, the next strong resistance is waiting along the $16,500 mark, where Bitcoin has already bounced once. Nevertheless, he is optimistic and forecasts a further breach to the $17,000 level.

What a great way to start the week mr bitcoin pic.twitter.com/qODDrJZbKp

According to the prominent on-chain data analyst Willy Wo, Bitcoin’s fundamentals show that other major institutions have entered the Bitcoin market or are increasing their shares and thus driving up the price further. Woo he refers to the on-chain indicator of “realized price”, which tracks the estimated average cost base that Bitcoin investors have paid. The analyst explained in this context with the following chart:

Realised Price estimates the average price the market paid for their BTC. Now at its steepest slope for this cycle, meaning capital influx into #Bitcoin is at its highest rate since the last bull market. (Higher than last year’s $4k-$14k move; the current move is more organic.). For the sake of this comment I’ll define “organic”. Organic price action happens when BTC price tracks closely with investor capital entering and leaving. When it’s inorganic BTC price is dominated by short term derivative traders. 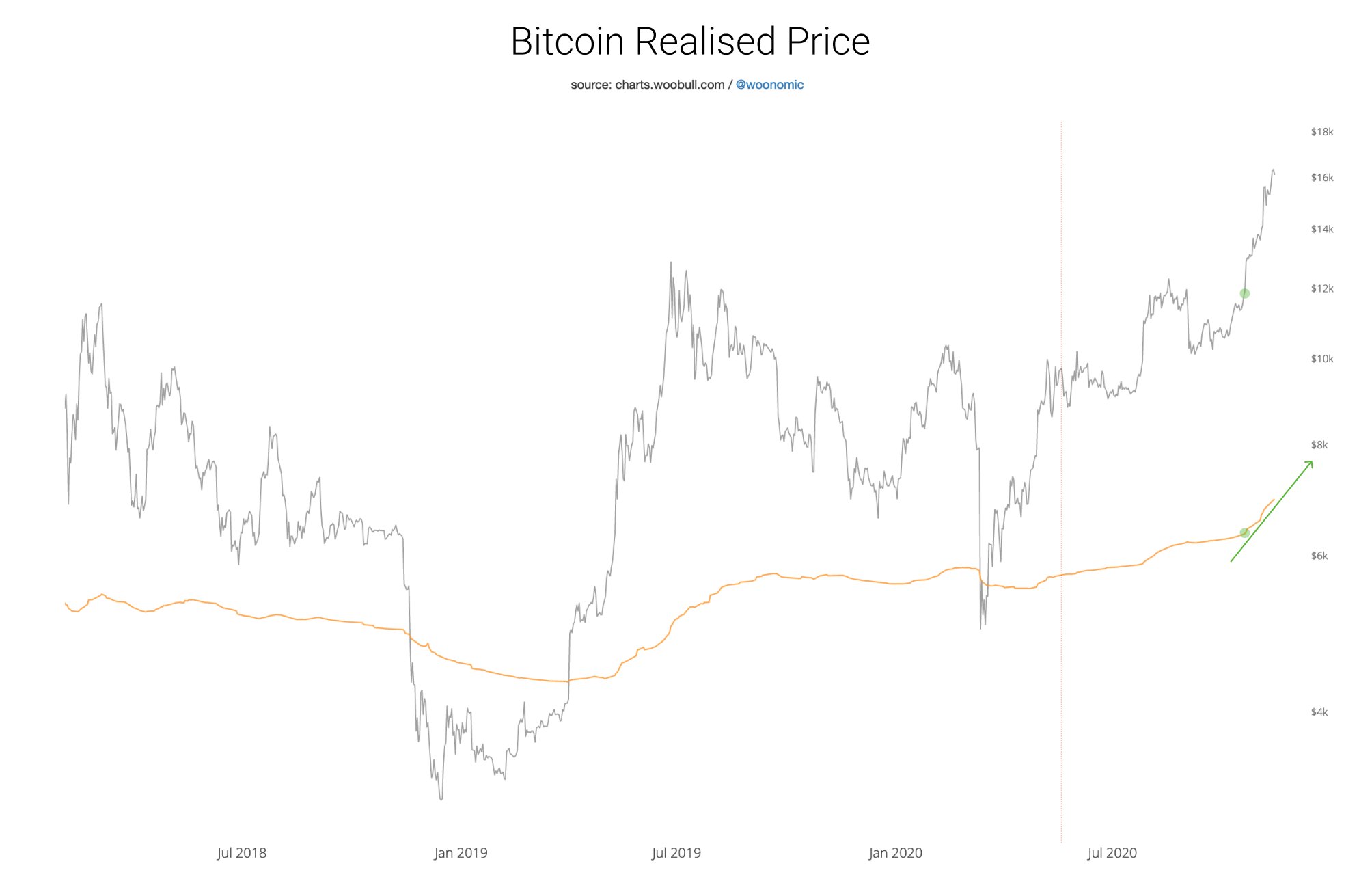 Woo also summarized that the new capital comes from “high net worth individuals” and the average transaction value has risen sharply. He even goes so far as to predict that the current bull run is just the warm-up for another major upturn. Nevertheless, Woo admits that a correction could follow soon, as this would be healthy and sustainable for the further price development of BTC. Nevertheless, the macro-on-chain data is showing a very bullish picture.

The current Bitcoin Rally is, as Woo has already made clear, also supported by institutional investors. For example, MicroStrategy bought $450 million worth of Bitcoins a few months ago, thus ensuring a further price increase in the market. Shortly thereafter, Square followed suit and bought BTC worth $50 million. However, the largest fish in the Bitcoin market is Grayscale. According to the latest update, the investment giant now owns almost $10 billion in cryptocurrencies. Due to the continuing buying frenzy, Grayscale now owns more than 2.1% of the currently available Bitcoin supply.

11/13/20 UPDATE: Net Assets Under Management, Holdings per Share, and Market Price per Share for our Investment Products.