Fidelity Digital Assets’ latest report explores Bitcoin‘s role as an investment asset in today’s market. In its introduction, the report states that a cryptocurrency can serve many purposes. This is due to its low correlation to other assets. For institutions, Bitcoin can be an adjustable risk investment alternative.

The report was created with the participation of major investment firms such as ARK Invest, Coinshares, Fidelity Investments, Octonomics, and Arca. In addition, the report was based on a previous survey conducted by Fidelity Digital Assets. There, 60% of the participants interested in digital assets as an investment responded that they should be combined with alternative investment vehicles.

That is non-cash assets, public debt issued by governments, long positions in stocks. In addition, an alternative investment should “give exposure to non-traditional returns”. According to the report, there is a growing demand for investment alternatives such as Bitcoin. Data from the CAIA Association shows that this asset class has had a 6% increase from 2003 to 2018 and is estimated at $13.4 trillion.

CAIA predicts even greater growth by 2025 that could benefit Bitcoin’s price. Alternative investment assets are estimated to grow to 18% and 24% of the market by 2025. However, the above figure does not represent the impressive growth of investment to “alternative assets” that there was from other market sectors.

The report indicates that equity investment firms increased their exposure to venture capital, alternative markets, and private equity by up to 43%. Institutions with a high level of exposure to alternative investment assets such as Bitcoin, the report states, “outperformed their peers in the short and long term”. Fidelity Digital Assets says:

(…) the interest in bitcoin and other non-yield-generating alternative investments could also increase in response to the Federal Reserve (and many other central banks) cutting their benchmark interest rate to zero (or below zero) this year. In a world where benchmark interest rates globally are near, at, or below zero, the opportunity cost of not allocating to bitcoin is higher.

Bitcoin and its correlation with other assets

When studying the daily returns of Bitcoin for a period of 5 years (2015-2020), the report found that its average correlation to other assets is 0.11. Therefore, the report states that the cryptocurrency presents gains independent of other assets. BTC’s correlation with gold is 0.11, with U.S. shares at 0.15 and with international shares at 0.14, as shown below.

This calls into question the thesis that has prevailed in the market about a possible correlation between Bitcoin and the traditional market. The report cites a Yale research that outlines that Bitcoin’s performance responds to “cryptocurrency-specific factors”. For example, the effect of negative or positive investor attention and momentum. The report states:

(…) the trend that an asset is likely to continue increasing in value if it has just increased in value. This is in line with the idea that bitcoin is reflexivexvi in that price and sentiment experience a self-reinforcing effect. The second factor that influences bitcoin price is investor attention as measured by Twitter post counts for “bitcoin” and Google search data series. 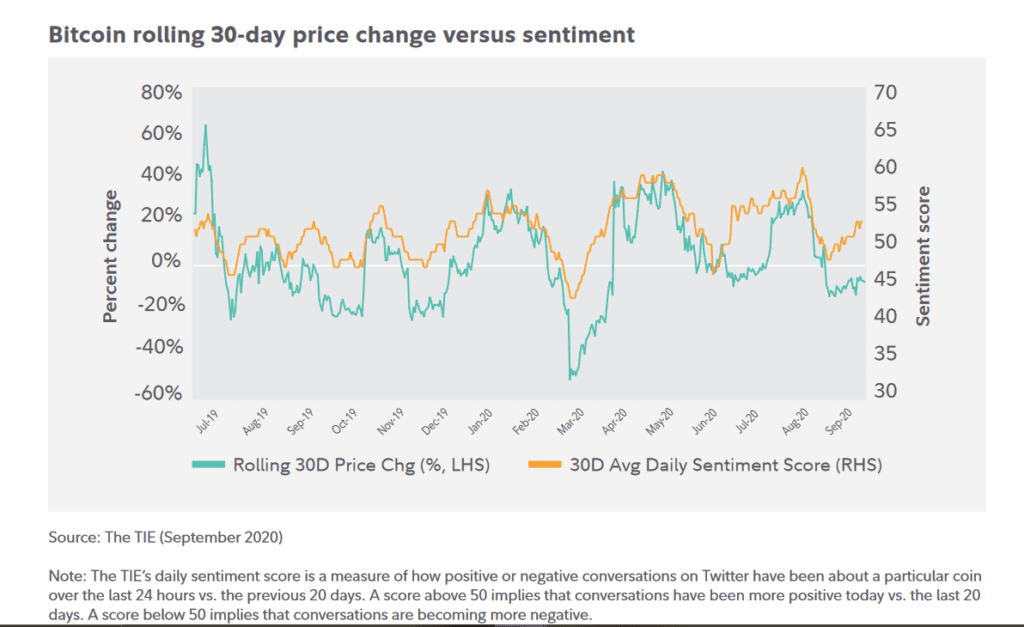 However, the report indicates that the maturation of Bitcoin as an investment asset will increase its correlation with the traditional market. By hypothesizing on the placement of 5% of the alternative investment asset portfolios in Bitcoin, Fidelity Digital Assets indicated that the cryptocurrency could see an exponential increase in its market capitalization:

Jaso “Yano” Yanowitz of BlockWorks stated that if Fidelity follows the hypothetical case presented and invested 5% of its $3.3 trillion AUM, $165 billion would flood into Bitcoin. Yano stated that “You have to be crazy to not own Bitcoin at this point”.

Bitcoin BTC
Previous ArticleRipple: Swell 2020 starts – Will the XRP price rise?
Next Article IOTA Foundation confirms that Coordicide will be launched as planned